Doctor Who Origins #1 from Titan Comics kicks off an untold adventure for the Fugitive Doctor. This brand new four-part mini-series finds the Doctor working for the mysterious Division on a highly dangerous assignment, where she uncovers a dark, insidious secret. This never-before-seen adventure will reveal why this incarnation of the Time Lord became known as the Fugitive! Way back in 2020 we were first introduced to Jo Martin’s Fugitive Doctor in the TV episode Fugitive of the Juddon. We discovered that she was a former agent of the Division, now on the run from her own people, and destined to one day have all her memories erased. The Doctor Who Free Comic Book Day 2022 Edition paved the way for this story, now Titan Comics are exploring this intriguing missing era of the Time Lord’s life even further with Doctor Who: Origins, a tale that delves into the Fugitive Doctor’s work for the Division alongside her Weeping Angel travelling companion.

The excellent creative team that brought us the Doctor Who comics Missy and Time Lord Victorious, of writer Jody Houser, artist Roberta Ingranata and colorist Warnia K. Sahadewa  have reunited to for this exciting new chapter from the Fugitive Doctor’s mysterious past. Having narrowly avoided a particularly sticky encounter with an angry Racnoss, the Fugitive Doctor and her Weeping Angel companion return to the TARDIS, where the Doctor promptly gets a summons to a not-so-clandestine meeting where she receive her first mission from the Division, and a new Time Lord companion fresh out of the academy – Taslo.

One thing I always like about Titans Doctor Who comics is the fact they are always self-contained stories, and perfect for fans both old and new to jump on to at any point. Doctor Who Origins is a great example of this trait and writer Jody Houser skilfully weaves the plot and mystery surrounding the Doctor and Taslo’s mission. The Fugitive Doctor’s quirky deadpan humour is evident throughout, nailing Jo Martin’s portrayal of this incarnation perfectly. This Doctor is clearly not overly thrilled at being lumbered with a new companion, especially considering how naive and gung-ho she can be at times, but the Doctor gradually warms to Taslo and seems to welcome her role as mentor to the young graduate.

Roberta Ingranata’s stylish artwork and free-flowing page layouts nicely convey the story and emotional beats, the early action sequence to recover alien spider eggs is well paced, and the scenes in the TARDIS with the Weeping Angel are another highlight – I really like the Classic Who vibe of the Fugitive Doctor’s TARDIS interior. The characters are all impressively rendered along with the environments, especially the planet where they make first contact with what  is supposed to be a hostile species, and colorist Warnia K. Sahadewa’s vivid tonal pallet really shines here as we see the Time Lords step out onto a bizarre alien world.

Along with the impressive regular cover, Doctor Who Origins #1 is also available in a choice of variant covers — including a glow-in-the-dark Weeping Angel cover! This is a great scene-setting issue to explore the concept of the Doctor’s perviously unknown regenerations, and the creative teams interpretation of Jo Martin’s wonderful Fugitive Doctor is brilliantly realised. Doctor Who Origins #1 explores a forgotten era – one that presents a wealth of untapped possibilities – to provide an exciting adventure for the Doctor’s most mysterious and eclectic incarnation of all.

The action and intrigue ramps up in Blade Runner Origins #2 as LAPD detective Cal Moreaux continues his investigation into the apparent suicide of a scientist at the Tyrell Corporation. But what should have been an open and shut case has now become a murder investigation. Just as Moreaux begins to uncover the shocking truth about the company’s advanced Replicant research programme, dark forces close in to eliminate his only witness, and the conspiracy he finds could well redefine the essence of what means to be human in Los Angeles: 2029.

Perkins and Brown weave a dark, compelling and well measured story with characters and plot twists that constantly keeps you guessing. This issue primarily focuses on Detective Moreaux’s ongoing investigation and his attempts to protect the late Dr. Kine’s brother, Marcus – who also has suspicions about the Tyrell Corp. However, their frantic high-speed escape from the mysterious replicant that’s tracking Marcus and the sinister machinations of Ilora Stahl, along with Cal’s clashes with his superiors at the LAPD, all conspire to prevent Moreaux from getting close to the truth.

The art by Fernando Dagnio and colors by Jim Campbell stylishly captures every nuance of the neon-noir drenched world of Blade Runner. From the gleaming cityscapes, dark rain swept streets, corporate opulence and dazzling technology Dagnio and Campbell bring Detective Moreaux’s tale to life with startlingly clarity and there’s even a beautiful homage to Blade Runners iconic “tears in the rain” scene for  the mysterious replicant prototype that’s been following Marcus’s every move.

I’ve been really impressed by what Titan Comics have been doing with their Blade Runner comics, and this new series presents a fascinating prequel to one of cinemas most endearing sci-fi masterpieces. Blade Runner Origins #2 a worthy edition to Titan’s range and is sure to please fans and newcomers alike.

Get ready to delve into the dark world of Yharnam once more in Bloodborne #1: The Death of Sleep, from Titan Comics, written by Ales Kot (Generation Gone, Zero), with art by Piotr Kowalski (Wolfenstein, Dark Souls).

A nameless Hunter awakens in a foreboding, ancient, city, a place gripped by a horrifying epidemic. Here, terrifying monsters are waiting to strike at every turn and the streets are awash with blood. Into this nightmare the Hunter seeks a way to escape the seemingly endless Night of the Hunt that has damned Yharnam There is only one hope left and the Hunter must set out on a gruesome, blood-soaked quest to bring this nightmare to an end once and for all… 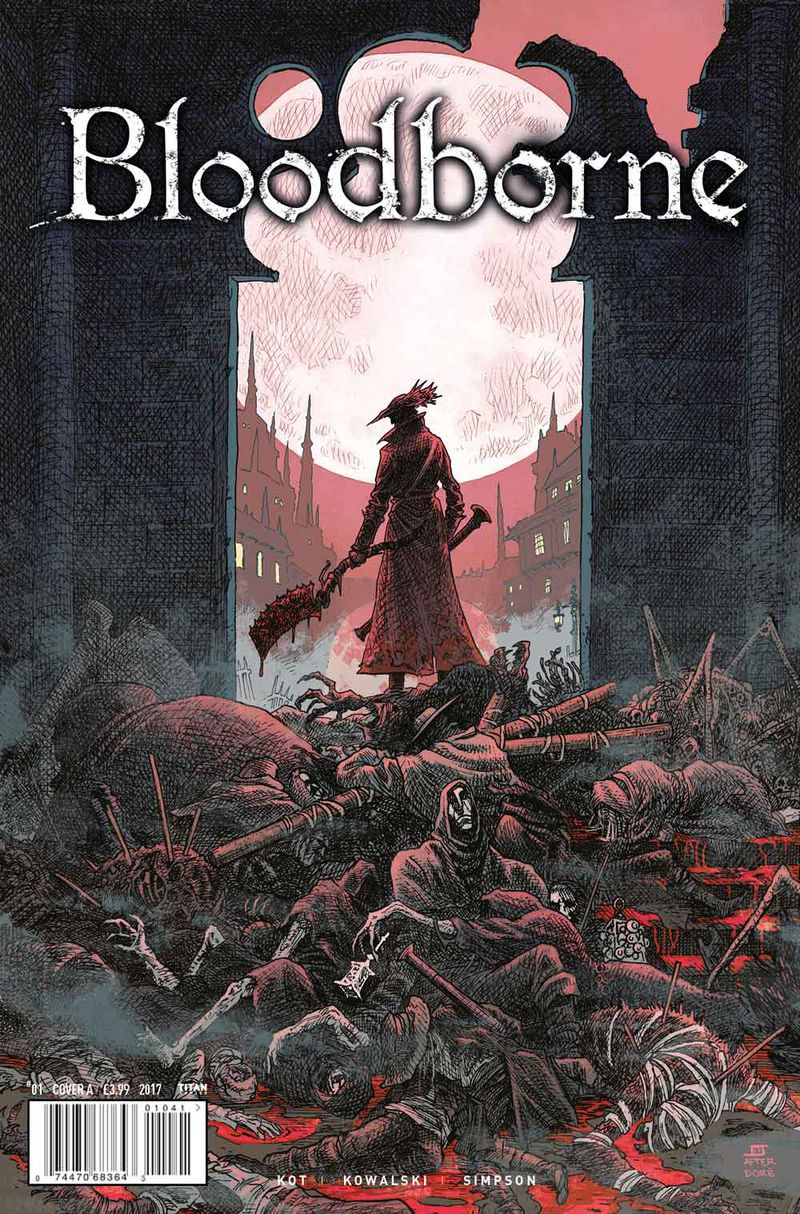 Based on the best selling videogame world of Bloodborne and its expansion DLC content The Old Hunters, Bloodborne #1: The Death of Sleep will mark a welcome return to Yharnam for fans of the gory, tough-as-nails game. Indeed, writer Ales Kot ensures this first issue includes all the familiar Bloodborne tropes – and then some! From the lone Hunters introduction to his initial encounters with the beastly horrors stalking Yharnam’s shadows, Kot quickly sets the scene. One particular narrative thread – the pale blood – is a mystery that was never really fully explained in videogame itself, and as such it provides a rich vein of drama for Kot to tap and facilitate key plot developments in the issue.

Piotr Kowalski’s artwork brings every visceral, blood-drenched moment of Kot’s intense script to life while the gorgeous colors by Brad Simpson adds vivid clarity to the flesh-rending carnage. If you’ve played the game, you’ll know how hideous and grotesque the monsters in Bloodborne are, and Kowalski’s art impressively recreates the distinctive look and feel of these monstrous creatures. As you’d expect, the action is slick and brutal too, and like the games unforgiving nature that all-too familiar “You Died” moment is something that surprisingly feels almost serene here – rather than the almost throwing the controller across the room rage that the Bloodborne game often made you feel when your Hunter met a grisly end.

While obviously aimed at fans of the Bloodborne game, there’s plenty of mystery and terror for horror fans to enjoy as well without any prior knowledge of the game. Boasting a striking cover by Jeff Stokley, along with a choice of three variant covers, the strong story and impressive art in Bloodborne #1 gets this new Titan Comics book off to a great start and I’m eager to see where the Hunter’s quest takes him next.