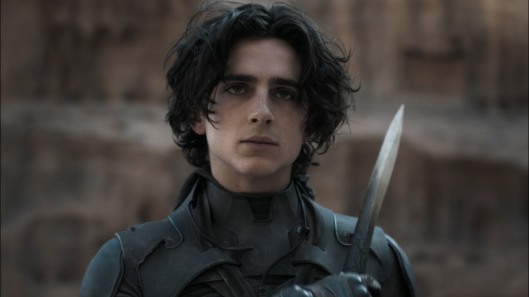 Oscar nominee Denis Villeneuve (“Arrival,” “Blade Runner 2049”) directs Warner Bros. Pictures and Legendary Pictures’ “Dune,” the big-screen adaptation of Frank Herbert’s seminal bestseller of the same name. A mythic and emotionally charged hero’s journey, “Dune” tells the story of Paul Atreides, a brilliant and gifted young man born into a great destiny beyond his understanding, who must travel to the most dangerous planet in the universe to ensure the future of his family and his people. As malevolent forces explode into conflict over the planet’s exclusive supply of the most precious resource in existence—a commodity capable of unlocking humanity’s greatest potential—only those who can conquer their fear will survive.

Villeneuve’s Dune adaptation of Frank Herbert’s novel will split the book into two movies. Check out the first trailer for the new Dune movie, which features a number of iconic scenes from Frank Herbert’s 1965 novel, including Paul’s prophetic dream,  as well as the Reverend Mother testing Paul before he departs for Arrakis, and the trailer ends with a glimpse of one of Dune‘s iconic Sandworms! I think Villeneuve is a great director, Frank Herbert’s Dune has always been one of my favourite Sci-Fi novels as well, so really excited about this new movie version! 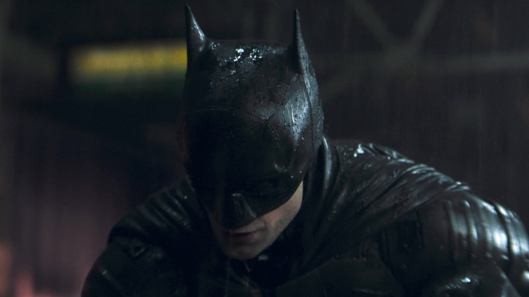 The Batman writer-director Matt Reeves has unveiled the first trailer for the new Batman film during the final panel for the DC FanDome event on Saturday. This dark, atmospheric teaser trailer, set to Nirvana’s “Something in the Way,” initially focuses  on the  Riddler (Paul Dano), who is leaving a trail of deadly teasers for the Batman and Commissioner Gordon (Jeffery Wright) to solve. There’s also a brief glimpses of Zoë Kravitz as Catwoman, we also get our first full look of Robert Pattinson in the Batsuit and driving the Batmobile, and the trailer highlights Batman’s brutal crime fighting technique as he beats up a thug just to make a point! 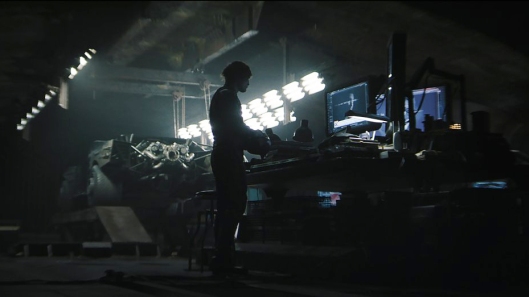 In the panel for the film, Reeves explained that “The Batman” won’t be an origin story as such, but it does start in “Year Two” of Batman’s career, in which Batman and several other iconic characters — Catwoman, the Riddler, and the Penguin (Colin Farrell) — are still in the early stages of their lives in Gotham. The story will feature mystery, corruption, murder and even links that stretch right back  to Batman’s past! The  movie also stars John Turturro, Peter Sarsgaard, Jayme Lawson and Andy Serkis.

Check out the awesome trailer for The Batman!

Production on the film was suspended due to the COVID-19 pandemic, Reeves had shot just 25% of the film so far. The Batman is currently in production and is  now scheduled for release in October 2021.

Of all the films and trailers featured during DC FanDome The Batman was the one I was most excited about. I thought it looked great, what were your thoughts on the trailer? One thing’s for sure, Matt Reeves “The Batman” looks set to herald a brave and bold new era for the Batman film franchise!

Welcome to the day after Judgment Day! Check out the new the official trailer for Terminator Dark Fate, in theatres 11.1.19.

And here’s the new official poster as well! 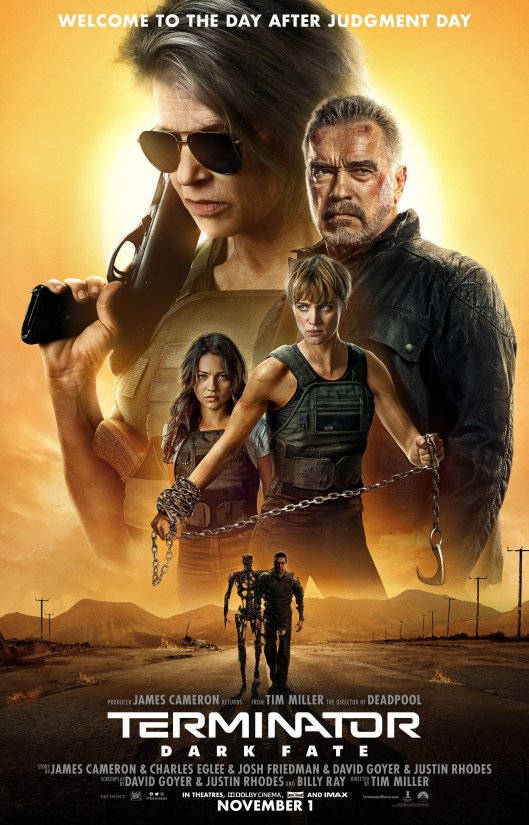 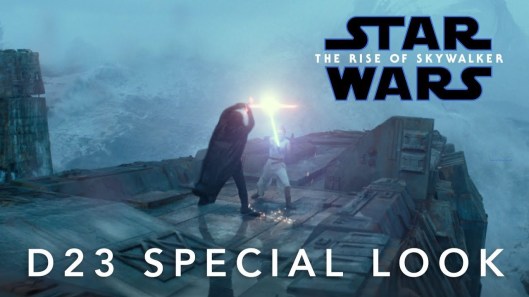 Lucasfilm have now released the much talked about sizzle reel of the Star Wars films which was shown at the D23 Expo last weekend. It begins with footage from the original film trilogy, and makes its way right through to The Last Jedi and beyond. With new glimpses of footage from Star Wars: The Rise of Skywalker, this final part of the new trilogy is shaping up to be an epic conclusion!

The first official trailer for Star Trek: Picard has been released at SDCC 2019, and it hits warp speed on every level! I’ve been looking foward to this series ever since it was announced, and the trailer looks awesome! Can’t wait to see Patrick Stewart return as Picard! It has also been confirmed that Jonathan Frakes, Marina Sirtis, Jonathan del Arco, Brent Spiner and Jeri Ryan will be reprising their roles as Will Riker, Troy, Hugh the Borg, Data, and Seven of Nine.

The trailer is packed with fan pleasing moments, seeing Data and Seven on Nine again was awesome, and I’m sure Star Trek Picard will be well worth the wait.

Engage! Check out the trailer for Star Trek Picard!

At the Star Wars Celebration in Chicago, it was announced that the new Star Wars film Episode IX would be called The Rise Of Skywalker. At the same event, the teaser trailer for the highly anticipated movie was also shown!

Every generation has a legend…

Check out the -new teaser for Star Wars: Episode IX!

I’m a big Star Wars fan, and really enjoyed this first trailer for Episode IX. It looks amazing and gives us a stunning first glimpse of what The Rise of Skywalker will have in store for us. The teaser trailer from Disney had so many great highlights: Rey getting advice from Luke, Rey in a face-off with some kind of TIE Fighter, Kylo battles soldiers in a forest, the Falcon, Chewie, and Lando Calrissian (played by Billie Dee Williams) is seen as well (YAY!), the late Carrie Fisher appears as Leia hugging Rey (in previously filmed footage from The Force Awakens), Rey stands with Chewbacca, BB-8, C-3PO, Poe and Finn seemingly preparing for battle, and we also hear menacing laughter from Emperor Palpatine!

I’m certainly looking forward to seeing how this epic saga in a galaxy far, far away will conclude in The Rise of Skywalker!

The new Avengers: Endgame official trailer has been released! This epic trailer givers us our first good look at what this major turning point in the Marvel Cinematic Universe will have in store for us. Avengers: Endgame, Directed by Anthony and Joe Russo, follows on from Avengers: Infinity War’s devestating cliff-hanger which saw fifty per cent of the MUC’s heroes turned to dust by Josh Brolin’s Thanos.. Now the saga reaches a shattering conclusion in Avengers: Endgame, and I can’t wait to see how everything is resolved after seeing this awesome looking trailer!

Whatever it takes. Check out the -new trailer for Marvel Studios’ Avengers: Endgame!

And there’s a great new poster as well!

In DARK PHOENIX, the X-MEN face their most formidable and powerful foe: one of their own, Jean Grey. During a rescue mission in space, Jean is nearly killed when she is hit by a mysterious cosmic force. Once she returns home, this force not only makes her infinitely more powerful, but far more unstable. Wrestling with this entity inside her, Jean unleashes her powers in ways she can neither comprehend nor contain. With Jean spiralling out of control, and hurting the ones she loves most, she begins to unravel the very fabric that holds the X-Men together. Now, with this family falling apart, they must find a way to unite — not only to save Jean’s soul, but to save our very planet from aliens who wish to weaponize this force and rule the galaxy.

I must admit, when the teaser trailer was released a while back I didn’t have much expectations for this film, as it looked like it was going to be a retread of 2005’s X-Men The Last Stand, but the full official trailer looks a lot more exciting and dramatic. Even though DARK PHOENIX marks the end of an era for the current run of X-Men films I’ll be looking forward to seeing it a lot more now on the strength of this trailer. How about you? What are your thoughts on X-Men DARK PHEONIX? 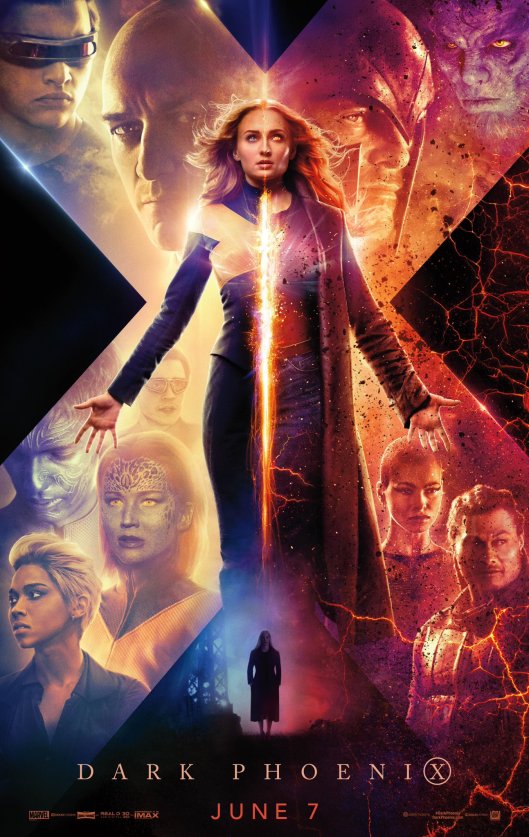 The first trailer for Spider-Man Far From Home has arrived webspinners!Peter Parker returns in Spider-Man™: Far From Home, the next chapter of the Spider-Man™: Homecoming series! Our friendly neighborhood Super Hero decides to join his best friends Ned, MJ, and the rest of the gang on a European vacation. However, Peter’s plan to leave super heroics behind for a few weeks are quickly scrapped when he begrudgingly agrees to help Nick Fury uncover the mystery of several elemental creature attacks, creating havoc across the continent!

I think its a great looking trailer, wery excited for Spider-Man Far From Home, what do you think?

Its time for the giant monsters to slug it out as Warner Bros. Pictures releases the second official trailer for their upcoming MonsterVerse movie Godzilla: King of Monsters!

Following the global success of “Godzilla” and “Kong: Skull Island” comes the next chapter in Warner Bros. Pictures’ and Legendary Pictures’ cinematic MonsterVerse, an epic action adventure that pits Godzilla against some of the most popular monsters in pop culture history. The new story follows the heroic efforts of the crypto-zoological agency Monarch as its members face off against a battery of god-sized monsters, including the mighty Godzilla, who collides with Mothra, Rodan, and his ultimate nemesis, the three-headed King Ghidorah. When these ancient super-species—thought to be mere myths—rise again, they all vie for supremacy, leaving humanity’s very existence hanging in the balance.

Godzilla: King of Monsters arrives in theaters on May 31st 2019.