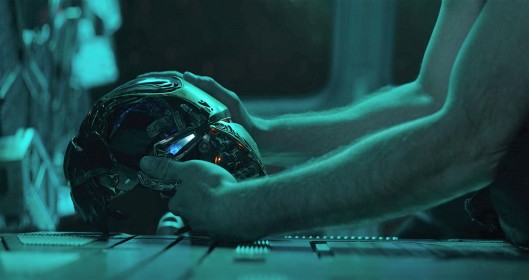 Avengers Endgame explodes onto the big screen in the wake of Avengers Infinity War’s devastating cliff-hanger from last year which saw fifty per cent of the MUC’s heroes turned to dust by cosmic super-villain Josh Brolin’s Thanos.. This spectacular, 22nd instalment of the Marvel Cinematic Universe, directed by Anthony and Joe Russo, and written by Christopher Markus and Stephen McFeelyand, brings the saga to a shattering conclusion – and yes Avengers Endgame is every bit the triumphantly bombastic finale we could’ve ever hoped for! 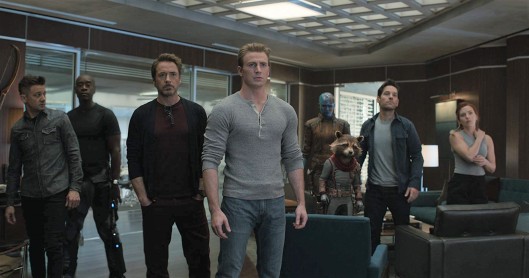 The  surviving Avengers are back, with the classic trinity of Robert Downey Jnr., Chris Evans and Chris Hemsworth returning as Iron Man, Captain America, and Thor, along with Mark Ruffalo’s Bruce Banner / Hulk and Scarlett Johansson’s Black Widow, and a wealth of other surviving MCU heroes including Jeremy Renner as Clint Barton, Don Cheadle as James Rhodes / War Machine, Karen Gillan as Nebula, and Paul Rudd as Scott Lang / Ant-Man to name just a few of the films star-studded ensemble cast uniting to avenge their fallen comrades by striking back to defeat the all-powerful Thanos and save the universe.

This time though the Avengers will have Brie Larson’s cosmic powered Captain Marvel fighting alongside them! Captain Marvel certainly brings a fresh new dynamic to the team. Captain Marvel’s presence somewhat redresses the slight gender imbalance in the Avengers team line-up, she’s a major powerhouse in her own right, and has a mischievous no-nonsense attitude and slight disdain for following orders. 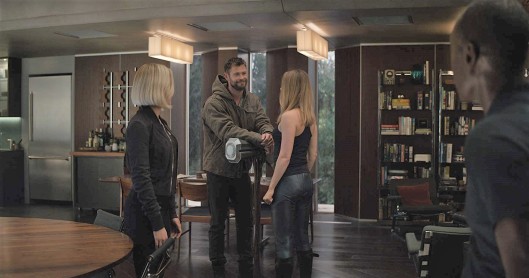 Josh Brolin remains as compelling and powerful in the role of Thanos. The Mad Titan is confident to the extreme, sure in his power, and as ruthlessly intelligent as ever. As villains go in the MCU, Thanos is one of the most well written and developed so far, and Avengers Endgame delivers a spectacular showdown between the Avengers and their intergalactic arch-enemy.

Anthony Russo and Joe Russo have weaved their spellbinding magic again with Avengers Endgame. If you thought Infinity War was epic in scope and scale, well you better buckle up, because you ain’t seen nothing yet! Avengers Endgame is packed with awesome action-set-pieces, jaw-dropping CGI, and plenty of glorious character moments for Earth’s Mightiest Heroes as they dust themselves off and take the fight to Thanos. 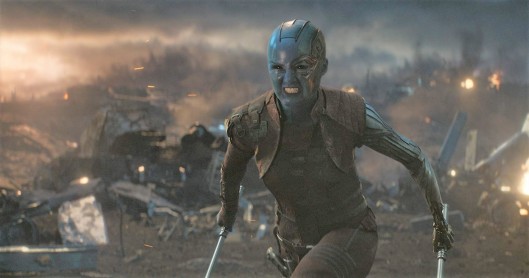 With its three hour run time of thrills, action, and shock surprises, Avengers Endgame will have you on the edge of your seat as the plot twists and turns through a myriad of plot threads that skilfully encompasses the entirety of the MCU amidst all the spectacle.

To say more could end up risking spoiling this incredible cinematic event. So, suffice to say Avengers Endgame provides an emotionally charged finale to the current MCU film series, its also brilliant fun, and one of the most epically action-packed superhero movies ever! 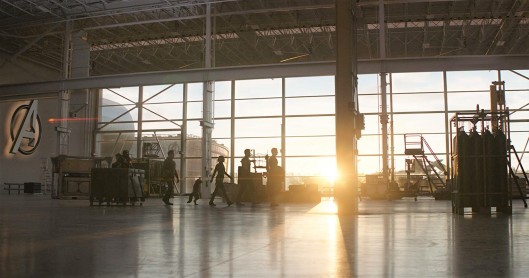 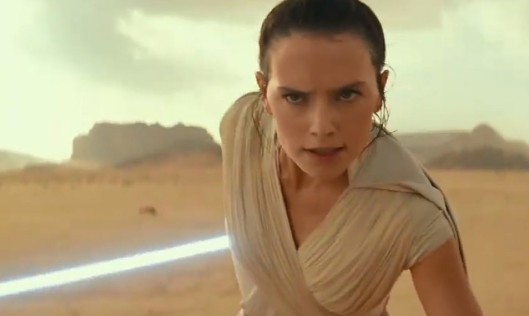 At the Star Wars Celebration in Chicago, it was announced that the new Star Wars film Episode IX would be called The Rise Of Skywalker. At the same event, the teaser trailer for the highly anticipated movie was also shown!

Every generation has a legend…

Check out the -new teaser for Star Wars: Episode IX!

I’m a big Star Wars fan, and really enjoyed this first trailer for Episode IX. It looks amazing and gives us a stunning first glimpse of what The Rise of Skywalker will have in store for us. The teaser trailer from Disney had so many great highlights: Rey getting advice from Luke, Rey in a face-off with some kind of TIE Fighter, Kylo battles soldiers in a forest, the Falcon, Chewie, and Lando Calrissian (played by Billie Dee Williams) is seen as well (YAY!), the late Carrie Fisher appears as Leia hugging Rey (in previously filmed footage from The Force Awakens), Rey stands with Chewbacca, BB-8, C-3PO, Poe and Finn seemingly preparing for battle, and we also hear menacing laughter from Emperor Palpatine!

I’m certainly looking forward to seeing how this epic saga in a galaxy far, far away will conclude in The Rise of Skywalker! 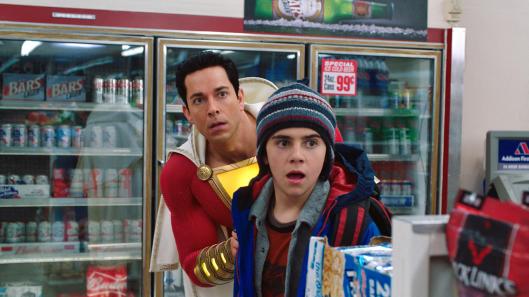 Shazam! is a confident and fun addition to the DC Extended Universe. Magic and monsters collide in this wildly entertaining mix of superhero action movie and body-swap comedy Directed by David F Sandberg, and written by Henry Gayden (with story by Henry Gayden and Darren Lemke).

Thanks to an encounter with a mysterious ancient wizard (Djimon Hounsou), when Billy Baston (Asher Angel) shouts the word SHAZAM! the streetwise 14 year old foster kid is now magically transformed into the adult superhero Shazam (Zachary Levi). Billy is still a kid at heart though, albeit one in a muscle-bound, godlike body, with incredible strength, speed, and the power to throw lightening bolts from his fingertips! Shazam delights in suddenly being an adult version of himself by having terrific fun with his superpowers. But he must also master his powers quickly in order to confront the evil Dr Thaddeus Sivana (Mark Strong) and the threat of the monstrous demons known as the Seven Deadly Sins being unleashed on the world. 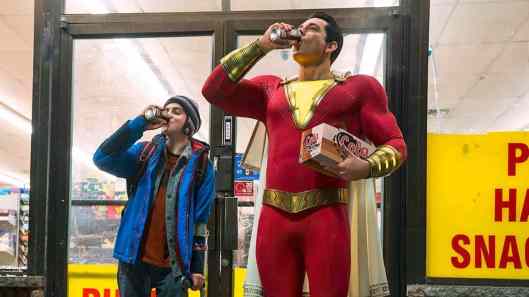 With a script that essentially feels like a super-powered spin on Tom Hanks’ 1988 comedy film Big – even paying homage to it at one point during a fight in a big department store – Shazam is a goofy adventure packed with jokes and exuberant fun. Asher Angel is perfectly cast as Billy Baston, a kid that suddenly finds himself bequeathed with incredible power and responsibility, who, along with Zachary Levi playing his amusing super-powered alter-ego, brings a gloriously frank and excitable sense of wonder to the character. 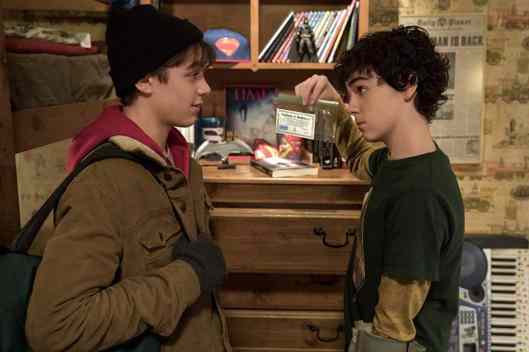 The strong emotional dynamic is enhanced further by Billy’s foster family. Jack Dylan Grazer is a delight as Billy’s nerdy foster brother Freddy Freeman, and Faithe Herman is also great as Billy’s foster sister Darla. It is this warm grounding in reality that’s the key to Shazam’s success, you become more invested in the characters as a result, and it also provides a nice counterbalance to all the fantasy elements as well.

Mark Strong is well cast as the wickedly evil super-villain Dr Sivana and provides an excellent adversary for Shazam to face-off against in David F Sandberg’s sickly directed movie. Although Shazam doesn’t have quite the same epic wall-to-wall action of more recent superhero blockbusters, the conflict between Shazam and Dr Sivana still provides plenty of crowd-pleasing superhero action to enjoy, and the exciting finale featuring the scary CGI onslaught of the Seven Deadly Sins rounds everything off in fine style. 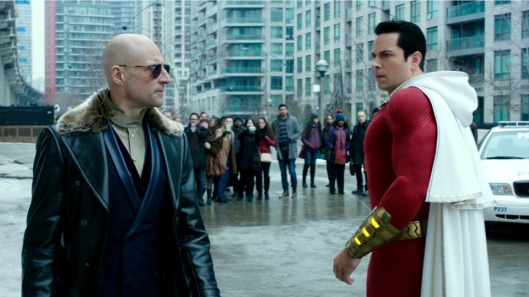 Shazam, created by Bill Parker and C.C. Beck in 1939, might be one of the lesser known comic book characters (he actually sold more comics than Superman at one point and was originally called Captain Marvel until legal problems saw the character side lined for a time until he was resurrected by DC Comics as Shazam), its great to see the character appear now in the DCEU and get a well deserved share of the limelight.

Boasting a superb cast and wry blend of action and laughter, Shazam is without doubt one of the most entertaining and funny superhero movies I’ve seen in a long while. The DC film universe is really finding its feet now! 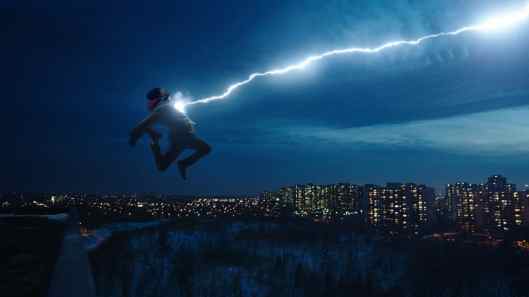