The alternative universe of Earth 2 was rocked to the core when its Trinity of Wonders died saving the Earth during the Apokolips War. Facing insurmountable odds Superman, Batman, and Wonder Woman made their last stand against Steppenwolf and his Parademon horde in the ruins of Metropolis. They fought bravely, but even Superman was overpowered by the Parademon’s, forced to watch helplessly as Steppenwolf ruthlessly slaughtered Wonder Woman, before he too was vaporised and killed. After Batman sacrificed himself to destroy the Metropolis beacon tower, Steppenwolf’s forces lost their connection to Apokolips. 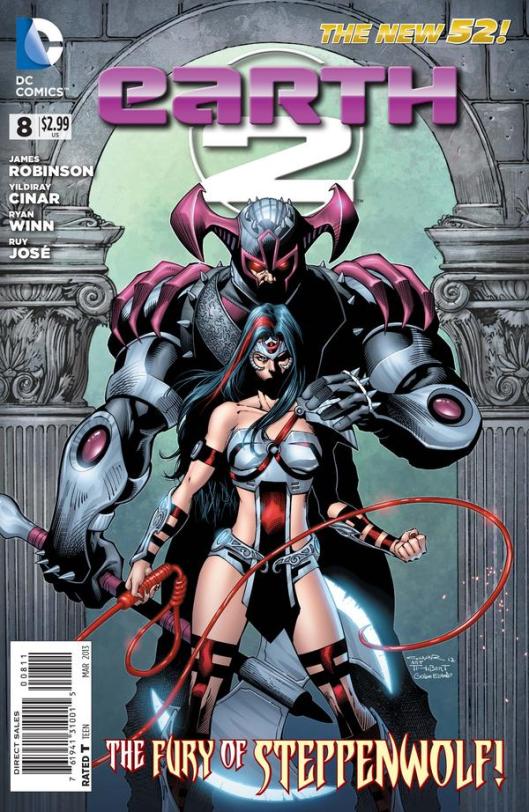 Steppenwolf managed to escape through a Boom Tube, and until now his whereabouts have been unknown. Now in Earth 2 #8 writer James Robinson finally reveals what happened as we rejoin the alien war criminal five years after the Apokolips War. Having taken refuge in Dherain, the stranded alien has made an alliance with King Marvo, who assisted Steppinwolf’s invasion during the war and has since managed to evade the World Courts by implementing a treaty which allowed him to close the borders of his country at the end of the war.

Having benefited from Steppenwolf’s advanced technology; King Marvo has grown tired of his alliance with the alien General, and lures him to a meeting where Dherain’s military forces stand ready to kill him. Using suits of armour developed from Parademon schematics, Marvo and his elite Northern Cavalry attack Steppenwolf. But the monarch has gravely underestimated Steppenwolf, he is not alone, and as he rises to face his former ally, Steppenwolf’s most loyal soldier emerges from the shadows to strike back at Marvo’s army.

Guest artist Yildiry Cinar is on hand to ensure Earth 2 #8 is as spectacular as ever. After the pace slowed somewhat while the World Army and its New Wonders dealt with the fallout from their battle with Solomon Grundy, Earth 2 #8 sees the long awaited return of this series first protagonist and the debut of the mysterious Amazon warrior: Fury! When we first get a glimpse of Fury she strikes down two soldiers who are talking about Steppenwolf and their Kings plan to betray the alien, and she promptly ends their lives with a snap of her whip.

Yildiry Cinar’s art is as impressive as ever, with great inks by Ryan Winnn and Ruy Jon, perfectly rendering every moment of the Amazons rampage through the Dherain army – cutting a swathe through the troops with her energized whip before smashing their bodies with a tank that has had the audacity to fire at her. It is here, in the heat of the battle, that Steppenwolf reveals to King Marvo that Fury is actually Wonder Woman’s daughter, who he took from Amazon Island, corrupting and training her in the ways of Apokolips to be his most deadly and trusted warrior. 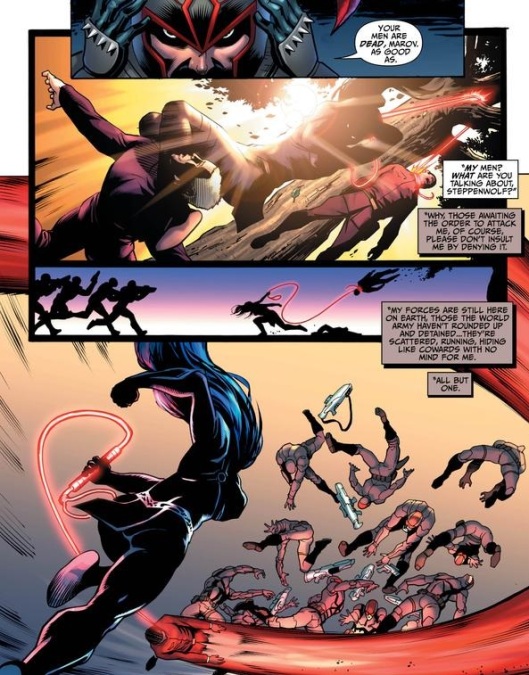 As the issues races towards its climax, Steppenwolf cuts down King Marvo in mid air with his axe, in probably one of this series most brutal scenes yet. Fury stands by her master’s side as he lifts Marvo’s severed head up for his people to see. Steppenwolf addresses the crowd and demands their obedience and they kneel before him as Fury declares he is their new king.

The activities of the World Army and the New Wonders take a back seat this issue as Steppenwolf and Fury carve a bloody trail of death and destruction through Dherain’s futuristic cityscape of gleaming towers. Although it dose seem a little strange how Steppenwolf could have remained hidden for this length of time, with only a cleverly worded treaty to keep the World Army at bay, I’m sure all will become clear as Robinson reveals the full extent of Steppenwolf’s plans.

It’s also going to be interesting to see how Fury’s character will develop over time. She is a real powerhouse, who seems to revel in using her immense strength and deadly whip to dispose of anything that stands in her way. I’m looking forward to the impending showdown between Steppenwolf and the New Wonders of Earth 2. Although it’s unclear how, or if, Fury will switch sides and stand with Earth 2’s heroes against Steppenwolf and his army, I’m sure the Amazon warrior will have some part to play in bringing about her masters downfall.