A deadly threat crashes to Earth in X-Men #8, brining peril to the Mutant nation of Krakoa from the farthest reaches of Shi’ar space. The New Mutants have returned from their intergalactic adventures, unwittingly brining trouble home with them, sparking conflict involving the Brood, the Shi’ar Empire, the Starjammers, and the Imperial Guard!

From the dawn of a new day on the island of Krakoa, to the chilling scenes on the fringe of Shi’ar space, and Cyclops and Havoc finding their brother Vulcan has been partying a little too hard at their lunar homestead writer Jonathan Hickman implements a slight gear shift in the overall narrative of this new X-Men series to propel the New Mutants and the X-Men into a cosmic spanning saga. With the defence of Krakoa at stake as the Brood attack, searching for the King Egg the New Mutants brought back to Earth, the Summers brothers hatch a plan to use the said egg to lead the oncoming Brood horde away into space via a Shi’ar stargate.

The action is frenetic and well rendered by Mahmud Asrar, especially the opening moments where the parasitic Brood are depicted swarming in space, initial scenes with Cyclops and Magik coordinating the defence of Krakoa are also excitingly dynamic, and colorist Leinil Francis employs a rich palette of tones and hues that nicely accentuates the action. 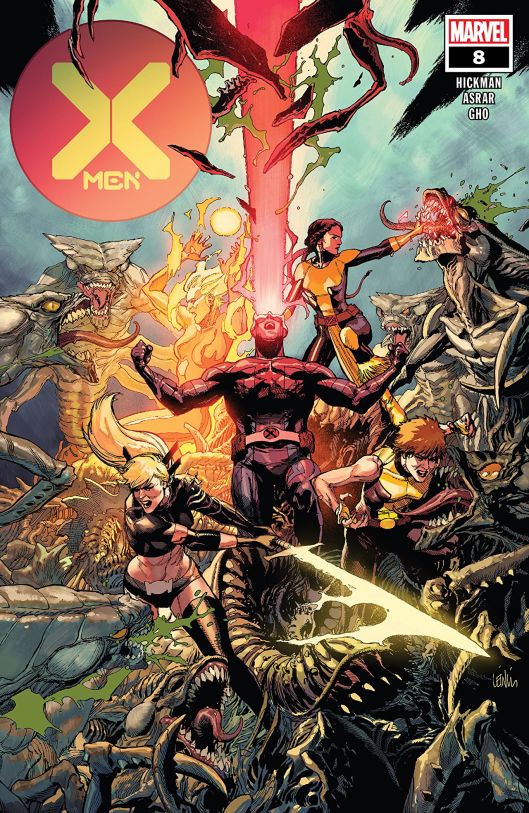 Considering how dramatically the Dawn of X relaunch of the X-Men range has evolved in recent issues, with the new Mutant nation of Krakoa developing its own rituals and customs, resurrection protocols, the brutality of the Crucible, and the X-Men’s plan to prevent the creation of the super Mutant killing robot, Nimrod, on the Orchis space station orbiting the sun, along with Professor X’s rather unsettling demeanour (especially the coercive manipulation of Mystique in their attempt to achieve this goal), X-Men #8 feels like a distraction – albeit an exciting one – from the core narrative Jonathan Hickman has built since the game changing events of House of X and Power of X.

For me Jonathan Hickman’s flagship X-Men book remains the pinnacle in terms of quality and good storytelling. Hickman may be acting as a kind of show runner for the entire range of X-Men comics now, but few of the other X-titles that Marvel has been churning out have really grabbed me, save for X-Force and Wolverine by Benjamin Percy. So, if you only have time for one X-Book, I’d make it Hickman’s X-Men, it was bit of a slow burn at first, but has proved well worth sticking with. The X-Men don’t necessarily feel like heroes anymore either, they are now one united Mutant nation on the living island of Krakoa, and the X-Men are certainly making the rest of the world sit up and take notice in a way that’s never happened before in the history of the X-Men. Sure, I miss the days where the X-Men felt more like a crazy mutant soap opera, but I really like how Hickman is doing something so fresh, different and innovative with X-Men right now.

In closing, X-Men #8 juggles a number of plot lines, with the Cyclops, Havok and Vulcan jetting off into space, the Starjamers runing into trouble with a Kree Accuser, and Gladiator and the Imperial Guard finding a new target to hunt. Jonathan Hickman continues to deliver engaging storylines and strong characterisation on every level, the Broods return and epic scale of the issue is impressively realised by Mahmud Asrar’s artwork, and the overall tone of the issue energetically paced. X-Men #8 might leave us chomping at the bit as wider issues are put to one side momentarily, but this unexpected jaunt into space makes for an action-packed diversion nevertheless, and the return of the Brood always provides a challenging threat for the X-Men to contend with.