Everything comes to a head in The X-Files #17 as the pieces of the epic conspiracy FBI agents Fox Mulder and Dana Scully have faced begin to fall into place. This case has already tested Mulder and Scully to breaking point in their relentless pursuit of the Truth, and now dark forces have infiltrated the highest levels of government…

Kicking off with one of Menton 3’s gloriously striking covers; an epic season finale feel permeates every aspect of this issue of The X-Files. From here writer Joe Harris quickly builds the tense, brooding atmosphere that’s become so indicative of this story-arc as military forces in the Sea of Japan experience uncanny systems failures east of North Korea, before the scene shifts to Alexandria, Virginia, where Mulder finds Scully. However, recent events have caused them both to question each others judgement, and the fallout from last issues explosive cliff-hanger inevitably leads to some pretty heated exchanges between them! 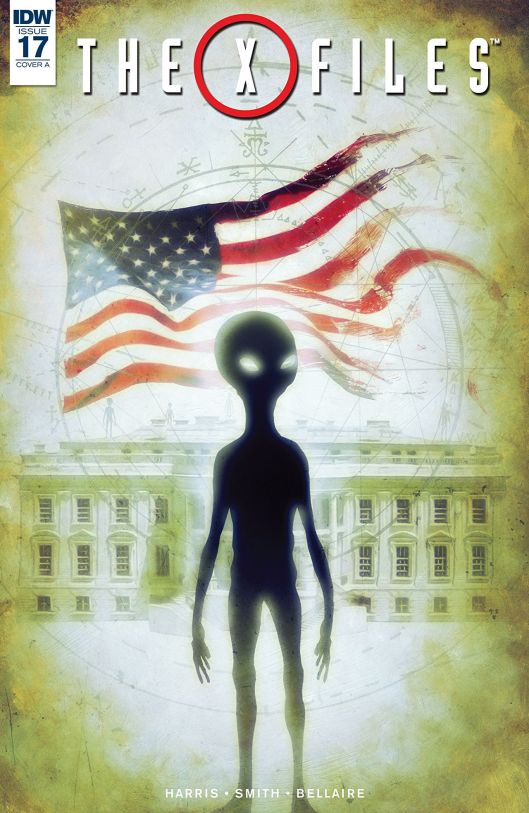 Harris has deftly woven the X-Files mythology together with pertinent and contemporary issues over the course of the Resistance storyline, and this issues subtexts of the unpredictable nature of a new administration and rising tensions between the Pentagon and North Korea proved an extremely timely backdrop for Mulder and Scully’s quest for the truth. The schism between the Old Ones and the Black Site is also clarified as events bring Mulder, Scully, and Director Skinner to a secret facility where the fate of the mysterious Firas Ben-Brahim and the full scale of the conspiracy with alien forces collide with startling results.

Matthew Dow Smith’s excellent artwork, as always, superbly recreates the look and tone of the TV series. The finer nuances of Joe Harris’ script are also brilliantly realized, Dow Smith’s art captures that unique chemistry between Mulder and Scully perfectly, and together with Skinner as well in this issue we are treated to some truly fantastic scenes between them. The panel layouts are stylish in their simplicity and give a nice flow to the narrative. The colors by Jordie Bellaire infuse every scene with subtle shades and rich tones, with dusky greys and vivid greens in particular all beautifully accentuating the shadowy settings in this issue. From the scene setting opening on the Sea of Japan, to Mulder and Scully’s visit to Peters Mountain, and the spectacular extraterrestrial tinged finale this issue looks every bit at impressive as the powerful story it conveys.

Although I’m sad IDW’s X-Files ongoing series is finishing, as they say, all good things must come to an end… The creative team of Joe Harris, Matthew Dow Smith, and Jordie Bellaire have collectively done some truly outstanding work on the X-Files comics over the last three and a half years, their contribution to the legacy of the X-Files has been unparalleled, and will always be held in high regard. I’ve had the pleasure of reviewing many issues of The X-Files and I’m genuinely going to miss this IDW series. The X-Files #17 may close the comic book files on UFO‘s, the unexplained, and the paranormal for now but its not the end of The X-Files at IDW Publishing, and just like the spookiest of X-Files TV episodes Harris, Smith, and Bellaire leave us wanting more and sure in the knowledge that the Truth is still out there…