The original Kid Flash finally meets the new Kid Flash in The Flash #9 as terrible danger strikes! In this special issue from Joshua Williamson, Jorge Corona, and Ivan Plascencia, Wally West and Wally West must team-up to help the Flash as the Scarlet Speedsters investigation into the events from DC Universe Rebirth #1 continues.

The Flash #9 offers a wonderful blend of action, mystery, and nostalgia, as writer Joshua Williamson continues to build on the bold new era for Barry Allen in the wake of DC’s Rebirth event – of which The Flash has arguably been one of the most consistent and integral parts of DC Comics brand-wide revitalization.

Kid Flash of Two Worlds is a charming and insightful single story issue. Its Halloween in Central City, an accident has left the Keystone Bridge badly damaged, and its up to the Flash and Kid Flash to race to avert disaster. The dynamic between the Flash and the new Kid Flash is handled really well by Williamson, it’s still complicated slightly because Wally doesn’t known Barry is the Flash, and things get notched up a level when the original Kid Flash arrives to help out as well. But this historic meeting inadvertently causes some major trouble for the Flash and they must unite to bring the Flash back from the brink of oblivion. 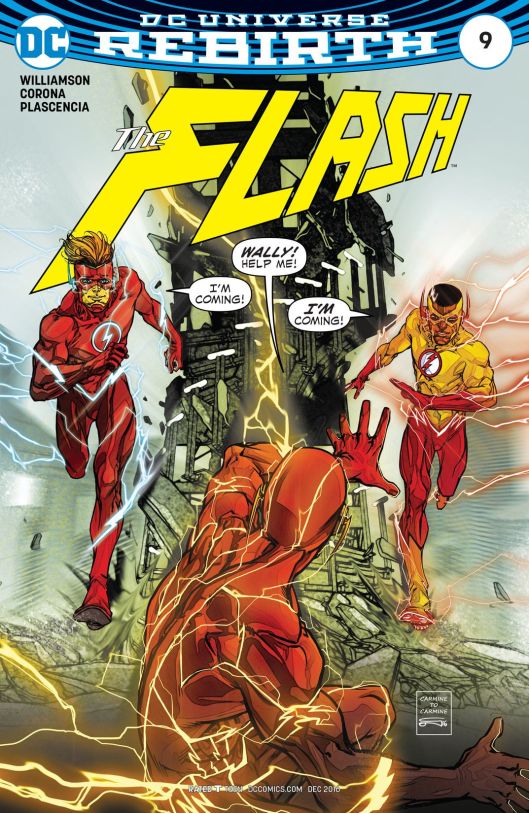 This sets in motion a chain of events which leads to some startling revelations for the new Kid Flash. One thing that shines though in this issue is the close bond between the speedsters and their loved ones, they are like family now, and as such they look out for each other. There are some wonderful scenes in this issue between the Wally West’s, and later Barry and Wally, as the Flashes’ mull over the mystery of why the world forgot the original Wally West, and the identity of who is sending Iris flowers is another beautiful touch. In short, The Flash #9 is a superb character driven issue, which also sets out some tantalizing possibilities for the future.

Jorge Corona’s artwork skilfully balances the emotional warmth and electrifying action in this issue. There are some highly impressive splash pages, dynamically angular page layouts also match the beats of the story perfectly, the characters and their expressions are well realized, and the urgency when Kid Flash’s past and present have to save the Flash is skilfully portrayed. It is in the quieter moments though, where Corona’s art really excels, there’s a short interlude with Wally’s friend Chunk, moving scenes as Wally talks about his parents, and a coda between the original Wally and Barry that is almost too magical for words. The colors by Ivan Plascencia look as impressive as ever, the speedsters scenes are awash with bold, vibrant tones as the speed force crackles around them, while the more emotional, thoughtful moments take on a sombre quality with somewhat duskier hues and richer shadows, and that final page is simply to die for.

The Flash #9, with its stunning cover by Carmine Di Giandomenco, beautifully emulates the classic Silver Age “Flash of Two Worlds” story and cover from The Flash #123 (1961), and writer Joshua Williamson does a fantastic job of melding those classic elements with a distinctly modern spin for this DC Rebirth take on it. The Flash #9 is an unmissable super-speed delight, and one that tips its hat to the past, present, and future in fine style.