Batwoman confronts her father and Red Robin battles against impossible odds as the epic showdown with the Colony reaches its thrilling climax in Detective Comics #940, and it’s an issue destined to rock The Dark Knight’s world to the core. Batman, Batwoman and their new team of young heroes will soon face the chilling reality that, no matter the outcome, this battle to save Gotham may have already been lost…

For me, Detective Comics, with Batman and Batwoman fronting the team consisting of Spoiler, Red Robin, Orphan (Cassandra Cain), and super-villain seeking redemption Clayface, has been the highlight of DC Comics Rebirth and the new Bat-Books in general. From the moment it was announced, this titles concept and team structure, along with the inclusion of Clayface, captivated my imagination, and I love the dynamic that’s evolved between this fledgling superhero team as its evolved and learned to work together under Batwoman’s stewardship. 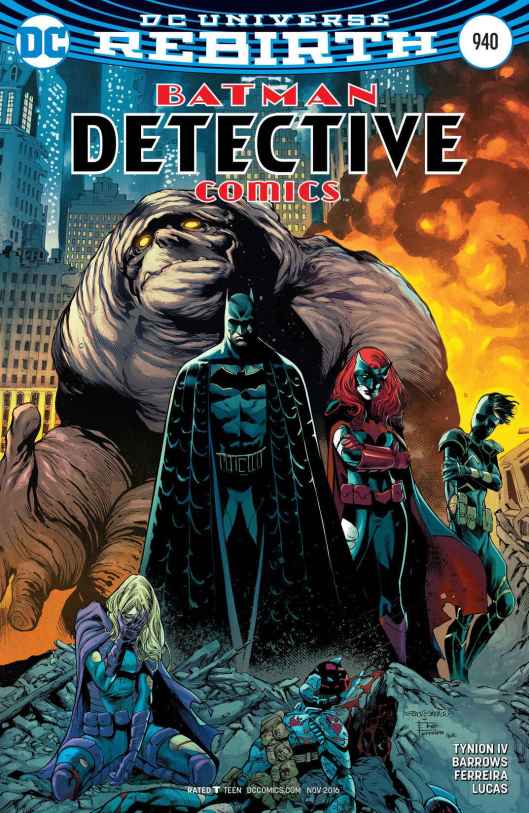 James Tynion IV ensures that Rise of the Batmen: Part 7 delivers a powerful finale for this first arc. I really like how Tynion has developed the bond between Bruce and Kate over the course of this storyline. Now they are forced to face the most challenging and difficult of circumstances, with Batwoman finally confronting her father’s treachery, as leader of the Colony and the one responsible for unleashing this army of Batmen and drone on Gotham, while Batman faces a desperate race against time to reach Tim at the old Wayne Tower.

Eddy Barrows gorgeous artwork for this issue of Detective Comics elevates the drama and tension to the max, with dynamic, almost cinematic page layouts. The scenes on and around the Colony Airship are spectacular, Barrows dazzles us with smashing action-packed moments of high drama as Batwoman’s fury spills over, but it is the moments where – having made himself the sole target of the drones – Red Robin makes his stand against this ultimate no-win-scenario that will truly have you on the edge of your seat. Eber Ferreira’s inks complement Barrows’ art brilliantly, enhancing the finer details and nuances of every scene, and the colors by Adriano Lucas meld with sublime grace to reflect the action and emotional beats of the story perfectly.

Detective Comics #940 is good, frustratingly good in fact, because to say more would completely spoil it. Suffice to say, James Tynion IV that pulled out all the stops for this one, its a master class in storytelling, plotting, and characterization. This issue has some of most powerful and emotional scenes that we’ve seen for a long time in a Batman comic. Barrows, Ferreira, and Lucas have also made this one of their most visually impressive issues so far. The emotional fallout from the cataclysmic events in Detective Comics #940 are conveyed in the most heartrending way, its moving stuff, and, needless to say, the ending will completely blow you away.

Rise of the Batmen has been a terrific start to Tynion’s run on Detective Comics. If this arc is anything to go by, I‘m sure Detective Comics will have become a must read Bat-Title for many fans, and now with the Night of the Monster Men crossover event about to begin, I can’t wait to see what Tynion and the whole creative team on Detective Comics have in store for us next!

A new threat is rising in Gotham City. Batman and Batwoman have assembled a new generation of heroes against this secret army of the Colony and their extreme tactics. Now, in Detective Comics #936, Batman is missing, and the time has come for Batwoman to take charge. But will she able to make Spoiler, Red Robin, Orphan (Cassandra Cain), and erratic super-villain seeking redemption Clayface work together as a team?

Rise of the Batmen Part 3: Army of Shadows, continues the brand new story-arc by James Tynion IV, where Batman and Batwoman have begun training a new strike force of young heroes to face the soldiers of the Colony that have modelled themselves on the Dark Knight and begun scouring the city, ruthlessly dealing with anything perceived as potential a threat – including it now seems, even Batman himself!

Tynion deftly builds on the series’ new direction and concept with Detective Comics #936, as Kate Kane confronts her doubts about training Batman’s team over a drink with former love interest Renee Montoya (she was also the Question), who makes a long awaited return here after being absent from the DC Universe – for the most part – since the New 52 reboot. It is a powerful, moving, and insightful scene for both characters. However, Montoya can easily see though Kate’s tough façade, and her parting words of advice are tinged with bittersweet sincerity for them both. From there an emergency call brings Batwoman to the teams new Belfry HQ, where Red Robin presents Kate with the news that Batman has been ambushed by the Colony, and that its now up to her to must decide what they do next.

This issue rattles along at a cracking pace. Batwoman quickly ascertains the Colony forces have military form, but it is Red Robin who really helps Kate to address her issues concerning Batman and her ability as a leader. It’s a great scene for both characters, and it offers a fascinating insight into how they both perceive Batman and feel they’ve earned his trust. The time has come for Batwoman and Red Robin to summon Spoiler, Orphan, and Clayface to the Belfry and to bring them up to speed with their mission, together with some expert advice from Kate’s father, to prepare them for what they must face with Batman now MIA.

Detective Comics #936 is a mighty fine looking issue, with pencils by Alvaro Martinez and inks by Raul Fernandez, every scene flows seamlessly into the next, and the staggering level of detail on every page skilfully accentuates the many subtleties and nuances of Tynion’s excellent scrip. From Kate’s musings on her past reflected in a her own beer glass during a quiet drink in a bar with Renee Montoya, to the dual functionality and visual spectacle of the Belfry’s huge window, this issue also delivers its fair share of big-action set–pieces as well. The colors by Brad Anderson are another major highlight of this issue of Detective Comics, with glorious tones and rich shades enhancing ever scene, especially those set in the Belfry.

James Tynion IV has done a fantastic job with this issue; it’s packed from cover to cover with action, suspense, and great characterization. Everything builds to a thrilling cliff-hanger in Detective Comics #936, a hidden agenda is revealed, the Belfry comes under attack, Clayface’s unpredictable abilities prove crucial, and Batwoman finally learns that she has what it takes to be the leader that Batman trusted her to be.

Of all the new comics that I’ve been reading recently, Detective Comics has easily been the standout new Bat-title from DC’s Rebirth event for me. Everything from the writing, the art, and its exciting cast of characters just seemed to click together right from the start. This creative team have really raised the bar with Detective Comics, its fresh, different, and TEC #936 is another excellent issue in this new story-arc.