Ever wanted to watch Doctor Who and tweet along with friends on Twitter while you enjoy the show? Well now you can! TARDIS Tweets is a group of Renegade Time Lords who love Doctor Who. So we decided to ban together and decided to share our thoughts on randomly selected Doctor Who stories by tweeting about them while watching the story at the same time.

What we do is pick a story from any of the 11 Doctors era’s and watch and tweet our thoughts about that story. Whether positive or negative our views are our own and most of the time the tweets will be comical and fun to read.

We will be holding regular sessions on Friday and Sunday. The Friday session is USA based and will start Friday August 10 at 7:15 with a press play at 7:30. We will be starting off with newer Doctor Who with popular Doctors David Tennant and Matt Smith. We picked The Unicorn and The Wasp and The Doctor’s Wife as two opposite stories as the Tennant story is funny and light hearted and the Smith story more serious and emotional. We picked those stories as a way for us to demonstrate our unique styles in tweeting along with two completely different stories from Doctor Who.

The UK version of TARDIS Tweets will launch on Sunday August 26 at 7:30 with a press play at 8:00 PM BST. Again we picked newer Doctor Who to get the ball running. We will be watching the stories that have the Weeping Angels in them. Those are the ever popular Blink, Time of Angels and Flesh and Stone.

What we emphasize is having fun. Have a good time watching Doctor Who and hopefully bring about exposure to the older classic Doctor’s and their stories. We use our own DVD’s, Blu Rays, Netflix Streaming or downloads to watch Doctor Who and tweet along with the story.

The website does not have live streaming so you have to do the work yourself and pay attention to the hash tag #TARDISTweets and wait for the press play now tweet and enjoy the fun. If you want more info on TARDIS Tweets then check out our site and pay attention the schedule side bar to see if we will be watching your favourite story or to see what’s up next and hopefully you will join us. 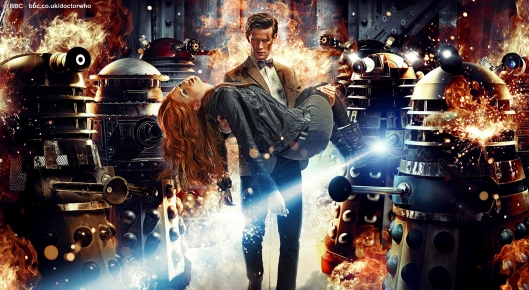 The stunning promotional picture for Asyum of the Daleks!

A spectacular new trailer for the Seventh Season of Doctor Who aired in the UK this morning at 6.00am! Fans have been eagerly waiting for another glimpse of what the new season of Doctor Who would have in store for the Doctor, Amy, and Rory. Now at last we can finally get a really good look at some of the exciting episodes coming up – particularly Asylum of the Daleks!

The trailer opens with the TARDIS flying through space and then cuts to Rory asking: “How much trouble are we in?” as the scene shifts to the Doctor and his companions seemingly trapped by an army of Daleks! The Doctor turns to his greatest enemies and exclaims: “You got me, what are you waiting for? At long last, here I am!”

We are then treated to a montage of different scenes from future episodes: Dinosaurs go on the rampage in a spaceship, some very cross robots berate the Doctor, the TARDIS crew go walkabout in New York, and Weeping Angels of all shapes and sizes lurk in the shadows!

The Doctor and Amy argue and she says: “This is what happens when you travel alone for too long!”  before they appear on a platform surrounded by Daleks, with Amy shrugging her shoulders as the Doctor tells them not to be scared, Amy turns to him and says: “Who’s scared? GERONIMO!!” and they all plummet through a tunnel of light towards a planet! The action then shifts at a blistering rate: with some explosive sequences in the Wild West, the Doctor being chased by Pterodactyls, intercut with a brief glimpse of River Song, exploding Daleks, and the Doctor and his friends riding a Triceratops!

As the trailer comes to an end we see Rory surrounded by dead Daleks, he turns to ask the Doctor: “Who killed all the Daleks?” and is shocked to see the Doctor carrying Amy’s body.

“Who do you think?” the Doctor says solemnly.

This brilliant new trailer heralds what will be the last days of the Ponds’ adventures with the Doctor in the TARDIS! Soon Amy (Karen Gillan) and Rory (Arthur Darvill) will be leaving Matt Smith’s Doctor after a heartbreaking showdown with the Weeping Angels, but the Doctor will soon be joined by his new companion played by Jenna Louise Coleman in the Christmas episode, before the series continues again next year and builds towards Dr Who’s 50th Anniversary! Season Seven will have Fourteen epic blockbuster movie episodes that are sure to be some of the most exciting yet!

The clips from Asylum of the Daleks look amazing, the little cherub “Angel” was really creepy, there were some brilliant Dinosaur effects, and the sight of seeing the Doctor carrying Amy at the end leaves us all on the edge of our seats! I was thrilled by this new trailer, it is one of the best I’ve ever seen for Doctor Who, and I can’t wait for the new season to start!

And here is a link to trailer on YouTube