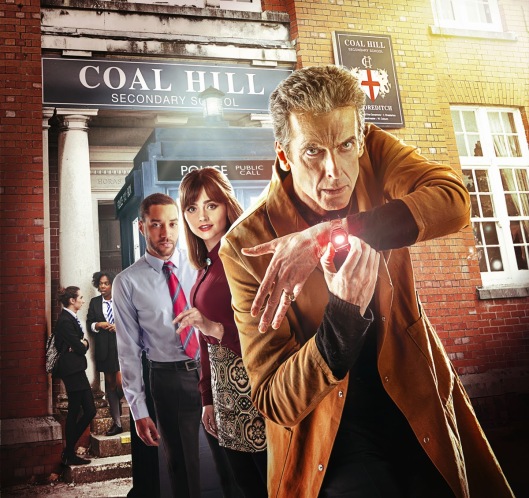 Clara is just about managing to keep her life under control, with her job at Coal Hill School, her adventures in time and space; a new boyfriend, and the Doctor, things are all ticking along nicely. However, when the Doctor needs to go undercover in Coal Hill School as its new Caretaker, things get decidedly complicate for Clara. With strange events happening near the school, the entire world is soon at risk as the terrifying Skovox Blitzer prepares to wipe out all humanity, and if that wasn’t enough for the Impossible Girl to deal with Clara’s well organised world is suddenly thrown into complete turmoil when Danny Pink finally meets the Doctor…

Coal Hill School takes centre stage in The Caretaker, the sixth episode of series eight, co-written by Gareth Roberts and Steven Moffat, and directed by Paul Murphy (Robot of Sherwood). The school played a prominent role in the very first episode of Doctor Who in 1963; it was revisited by the 7th Doctor in Remembrance of the Daleks (1988), before featuring in the 50th anniversary special The Day of the Doctor (2013), and again most recently in the 2014 eighth series episodes Into the Dalek and Listen. Gareth Roberts has written several Doctor Who stories: including The Shakespeare Code (2007), The Unicorn and the Wasp (2008), the Lodger (2010), and Closing time (2011), Roberts has also written many episodes of The Sarah Jane Adventures (co-writing the pilot episode Invasion of the Bane with Russell T Davies) and co-wrote the second story in the Doctor Who series of specials in 2009, The Planet of the Dead (also with Russell T Davies). The Caretaker has some similarities with The Lodger, from Matt Smith’s first season, when the 11th Doctor moved into Craig Owens flat to defeat a hidden alien menace, where the Doctor’s attempts to blend also were far from successful.

The Caretaker sees the Doctor taking a new job as Coal Hill School’s new Caretaker, Mr John Smith (A popular alias used by many of the Doctor’s incarnations over the course of the series, and first used by the 2nd Doctor in the 1968 story The Wheel in Space), much to Clara’s horror, and soon the grouchy old Time Lord is causing all sorts of problems for her when he moves the TARDIS into the Caretaker’s storeroom at the school to investigate a new threat facing the Earth. Peter Capaldi has some brilliant comedic moments as the Doctor in this episode, its great fun to see his grumpy and impatient incarnation of the Time Lord trying to get on with his mission, but he soon finds that “boring little humans” and everyday life at Coal Hill School have a way of upsetting his carefully mapped plans to defeat the Skovox Blitzer.

With an increasingly exasperated Clara trying to stop her life imploding around her, matters are complicated even further when events draw Coal Hill pupil Courtney (Ellis George) into the fray. We first saw Courtney momentarily in Deep Breath and Into the Dalek, in The Caretaker we get to know her a bit more, she turns out to be something of a kindred spirit for the Doctor, and she can be every bit as blunt and direct to the point is the Coal Hill’s cantankerous new caretaker.

Clara Oswald is busy living two completely separate lives, having exciting adventures with Doctor one moment, before returning to her life as a teacher at Coal Hill School, while also dating ex-soldier turned maths teacher, Danny Pink. So, when the Doctor postpones Clara’s next adventure because he’s busy with something else, she’s far from impressed when the Doctor later walks into the staff room at Coal Hill School and introduces himself as the new Caretaker. While a Police CSO (Nigel Betts) investigates a disturbance in a nearby abandoned building, only to discover something extremely nasty hiding in the shadows, the Doctor instigates his plan to scan for the alien technology that is threatening the planet. Meanwhile, Clara’s frenetic attempts to keep the Doctor from meeting Danny ultimately prove unsuccessful, and results with a series of misunderstanding between all three of them.

Series eight has shown that although Clara still travels with the Doctor, she‘s still very much a control freak, insisting the Time Lord returns her to her own time moments after she left so that she doesn’t miss out on events happening in her own life. However, it’s becoming increasingly difficult for Clara to balance her normal life with her time travelling adventures, things start getting really chaotic in The Caretaker with the Doctor working at the school, especially now that she’s also dating ex-soldier Danny as well. Having set up a circle of time mines around the school to deal with the alien threat, the scan reveals the Skovox Blitzer’s location, and the Doctor finally explains to Clara how he will use a special watch that can make him invisible to lure the machine creature back to the school where the Chronodyne Generators will drag it into time vortex – sending the Skovox Blitzer billions of years into the future. But when Danny finds some of the devices and accidentally deactivates them, the Doctor’s plan only manages to send the Skovox Blitzer three days into the future – leaving Clara with some serious explaining to do now that Danny knows about the Doctor and the TARDIS, and Clara’s mortified when Danny initially believes she’s an alien and that the Doctor is her space dad!

Samuel Anderson also returns as Danny Pink in The Caretaker, and with all the strange happenings at the school it’s not long before Danny figures out what’s been going on. So, when the one thing that Clara has worked so hard to avoid finally happens, naturally all hell breaks loose as Danny Pink meets the Doctor for the first time. The Doctor is very rude to Danny, particularly after he discovers Danny’s a former-soldier, something the Time Lord has voiced reservations about since his regeneration, and this episode goes some way to addressing the Doctor’s stance on this issue – which has seemed somewhat at odds with the character especially considering his past friendship with UNIT and Brigadier Lethbridge-Stewart. There’s a magnificent scene where Danny uses the Doctor’s watch to make himself invisible to observe the Doctor when he’s with Clara, but when the Time Lord notices Danny a furious argument breaks out between them inside the TARDIS – one that offers us an entirely new perspective on the Doctor’s relationship with his companions when Danny compares the Time Lord’s attitude to that of a military officer.

The Skovox Blitzer (Jimmy (Vee) is one of the most deadly and efficient killing machines ever constructed, its ruthlessly efficient, following its programming to the letter, and has hidden itself near Coal Hill School as it prepares to bring about the destruction of all humanity. The Doctor states the Skovox Blitzer homed in on this location because of the high concentration of atron emissions that have accumulated in and around this area over the years, probably due to its special connection with the Time Lord’s many adventures, and that it has enough explosive firepower in its armoury to take out the entire planet. 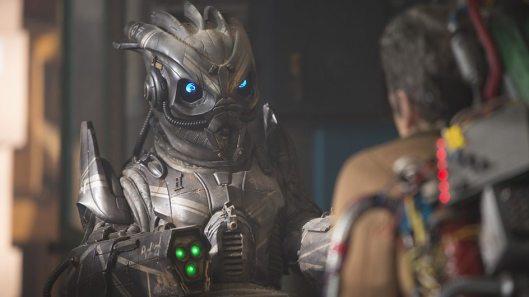 When the Skovox Blitzer reappears earlier than expected during Coal Hill School’s parents evening, the Doctor has to act quickly or everyone will be killed. With Clara acting as a decoy to draw the Skovox Blitzer to the storeroom, and with Danny’s timely intervention to distract it, the Doctor is finally able to shut the lethal machine down before it self-destructs. As the Doctor sends the deactivated Skovox Blitzer into space and welcomes a newfound friend to the TARDIS, Clara and Danny reach a mutual understanding about her adventures with the Time Lord, and somewhere in space and time a new arrival reaches the Promised Land.

The Caretaker is a fun, action-packed story from Gareth Robert’s and Steven Moffat. Peter Capaldi is really making the role of the 12th Doctor his own now, and he seems equally at home playing the lighter, more comedic elements as he does with the darker aspects of the Time Lord’s character. There are some great scenes for Jenna Coleman and Samuel Anderson as well, especially when Clara and Danny team up with the Doctor against the Skovox Blitzer, and director Paul Murphy strikes a perfect balance between the humours moments and fast-paced action sequences.

The Caretaker also features a coda where the Police CSO killed by the Skovox Blitzer finds himself in minimalist office situated in vast white corridor, where he’s greeted by the a sinister man, Seb (Chris Addison). When asked, Seb tell him this place has a number of names: heaven, afterlife, the Promised Land, and the Nethersphere. Missy (Michelle Gomez) enters the corridor from another door, but she says nothing and walks away. It would seem she is too busy to see the latest arrival to her realm, and as he looks out of the window, the Police CSO is visibly shaken by what he sees. This unsettling scene continues to build upon the mystery surrounding this uncanny Mary-Poppin’s like character, presenting us with even more tantalising questions about what she’s up to, and this time her demeanour is darkly sever and far from welcoming. 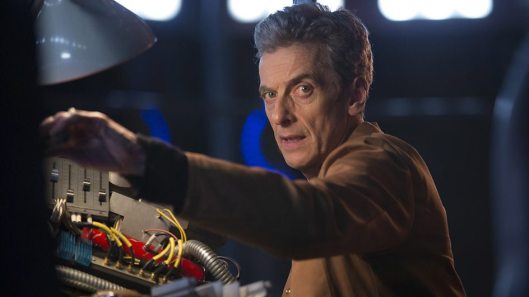 Although the threat of the Skovox Blitzer is resolved a little simplistically, its alien technology still presents a very unusual menace for the Doctor and Clara to battle. The Caretaker really puts Clara’s friendship with the Doctor to the test, which provides lots of fun moments throughout the episode, especially when the Doctor gatecrashes one of her lessons and later mistakenly thinks Adrian (Edward Harrison) is Clara’s boyfriend because he looks similar to the 11th Doctor and wears a bow-tie. However, now that Danny has met the Doctor, and with Courtney also discovering the Time Lords secret, it looks like Clara’s delicately balanced double-life as school teacher and time traveller is about to become even more hectic than ever before.