The Woman Who Lived 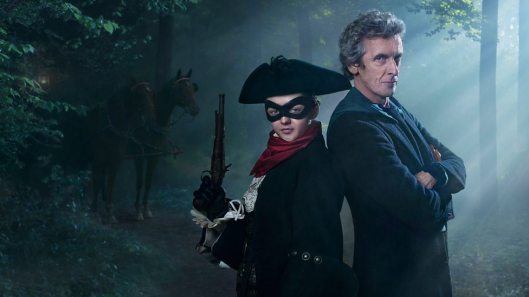 The Doctor arrives in England, 1651, in search of a powerful alien artefact, where the Time Lord will soon have to face the consequences of his past actions – and this time the Doctor meets someone who won’t just let him walk away from what he has done. This adventure sees the Doctor clash with the highwayman called The Knightmare. They form a tenuous alliance to reach a common goal, but the Doctor soon learns you should never trust a highwayman, and what is the fire-breathing creature hiding near The Knightmare’s home? Is The Knightmare really friend or foe? Only time will tell, betrayal will strike, and the Doctor will have to give the hangman’s noose the slip if he is to save the world in time from The Eye of Hades…

The Woman Who Lived provides an exciting conclusion to the story that began in The Girl Who Died, however this is not your average run-of-the-mill two-part story, and the way it all knits together is ingeniously done. The Woman Who Lived is written by Catherine Tregenna, and she makes her Doctor Who debut here with this episode, having written for theatre plays, Torchwood, and Casualty. Now, with The Woman Who Lived, this tale by Catherine Tregenna explores the notorious era of the highwaymen, as the Doctor (Peter Capaldi) goes off on an adventure while school teacher Clara (Jenna Coleman) is off taking Year 7 to taekwondo. The Woman Who Lived is also directed by Ed Bazalgette and features the second appearance of guest star Maisie Williams (The actress who plays Arya Stark in the HBO series Game of Thrones) in Series 9 as Ashildr – the Viking girl who gained immortality when the Doctor used The Mire medical repair kit implant to save her in The Girl Who Died. 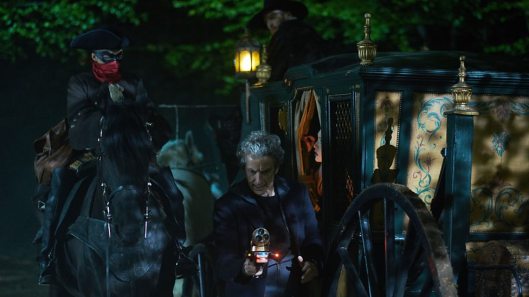 Stand and deliver! Arriving in England, in the year 1651, the Doctor begins his search for an alien artefact but he soon runs into trouble when he interrupts the notorious highwayman, known as The Knightmare, holding up a carriage in the dead of night. But the Knightmare is no ordinary robber, this is Ashildr! “What took you so long old man..?” Suddenly that line for the Series 9 trailer is given a whole new perspective as Maisie Williams character makes herself known to the Time Lord. But Ashildr is no longer the person the Doctor once knew, the price of immortality has cost her dearly, and she refuses to even acknowledge the name of Ashildr anymore – as everyone she’s ever known or loved is now long gone… It seems that Ashildr, or “Me” as she insists on being called, has done rather well for herself as a Highwayman, obtaining riches, and even an impressive looking home where a mysterious creature lurks in the grounds. 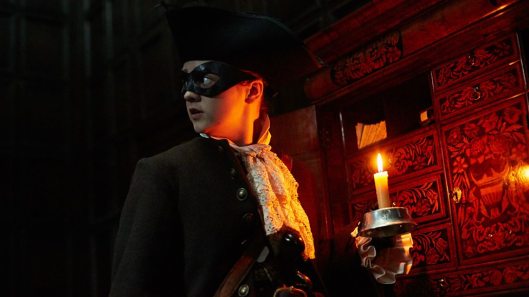 Peter Capaldi is on fine form again, he seems completely settled into the role of the Doctor now, and his performance here is spellbinding. It is a shame that Clara is sidelined for much of this story, but we do have Maisie Williams returning as Ashildr / “Me” to make up for it, as the young Viking girl who acquired immortality, and she proves more than a match for the Doctor as well – even outwitting him at times. Maisie Williams gives a terrific performance in The Woman Who Lived as Me, her character is much darker here, having been deeply affected by her long life of immortality, and even the Doctor is shocked by how dangerous and unpredictable she has become. Me has had 800 years of adventure, we soon explore the events of her immortal life since The Girl Who Died, all the battles, plague, and even the heartbreak of losing her children, and as the Doctor browses though the many journals of her life he finally begins to understand the implications of what he has done. Me wants the Doctor to take her with him, to be free of this life and travel the stars, but how she could possibly know “the man who runs away” has a “ship”? 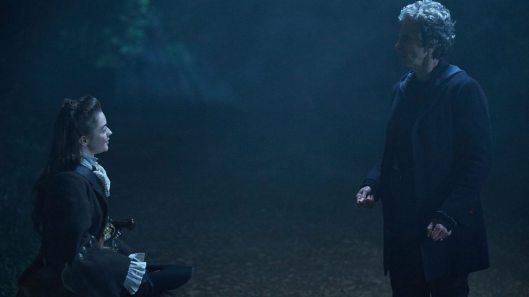 The Doctor’s and Me’s scenes are often a curious mix of witty and moving moments, Peter Capaldi and Maisie Williams make a fantastic team in this action-packed, emotional episode, and their performances magically reinforces the uncanny bond between the Time Lord and the young immortal. After they agree to work together, the Doctor and Me housebreak into the Fanshawe House where the alien artefact – The Eye Of Hades – is held, where the sonic shades serve as the Doctor’s “mask” and Me becomes increasingly exacerbated by her Time Lord “sidekick”, especially when their robbery goes awry and puts them in a tight spot – where Me takes the opportunity to confront the Doctor about how many people he has lost. The Woman Who Lived also has comedian and Doctor Who fan Rufus Hound, as highwayman Sam Swift “The Quick”, who also has a run in with the “Knightmare” and the Doctor, and his scenes with Peter Capaldi and Maisie Williams are brilliantly done – especially when Sam Swift hilariously thinks the Doctor is the Knightmare’s dad / sidekick! Best of all though is when the Doctor stops Me from killing Sam, it’s a menacingly powerful line, one that makes the Time Lords warning absolutely crystal clear, and a great moment for Capaldi’s Doctor.

The strange fire breathing creature, Leandro, who wanders the Knightmare’s grounds and home, is played by Ariyon Bakare. This regal looking feline beast claimed to be marooned on Earth and trapped in the 17th Century. He made an alliance with Lady Me / Ashildr, that once she acquired the missing amulet (The Eye of Hades) for him, they would travel the universe together, but the artefacts presence in 1651 drew the Doctor here and instigated his reunion with Ashildr. But when the Leonian’s presence is revealed the Doctor is shocked to discover that a life will have to be sacrificed in order to opens this insidious portal to another realm.

With the Doctor charging to the rescue on horseback, Sam Smith’s impressed there’s been such a good turn out for his hanging, and the gallows humour which follows is gloriously funny – especially when the Doctor joins in. However, when Ashildr uses the amulet to open the portal; it seems Leandro is not the last of the Leonians after all, and an entire Leonian invasion force is waiting on the other side of the portal to invade the world. The Doctor’s hope to get Ashildr back on track succeeds, realizing she’s been duped by her Leonian ally, she takes the second medical repair chip the Doctor gave her in The Girl Who Died, and uses it to heal Sam Swift and seal the portal – whereby Leandro’s “brothers” punish him for his failure and vaporise him. 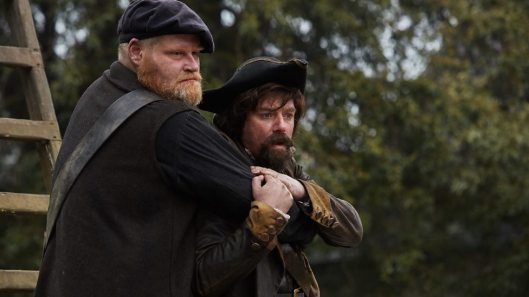 The wonderfully evocative closing scenes in the Inn leave us with almost as many questions as it does answers. Sam is healed by the chip, but the energy from the amulet has burnt it out, meaning he won’t be immortal, probably… However, it is how the Doctor compares his and Me’s immortality to how beautiful and precious life is to all the ordinary people around them, that really strikes an emotional cord, and when the Doctor is finally reunited with Clara there’s a chilling coda that indicates Me’s story is not over just yet…

While not quite so chock full of continuity references as previous episodes in this season, there are a still one or two interesting things that get mentioned, and the psychic paper also proves quite useful in this story too. When the Doctor tells Me / Ashildr about the Great Fire of London, he mentions that it was caused by the Terileptils, the alien race the 5th Doctor encountered in The Visitation (1982). The Doctor also mentions that he once travelled with another immortal, Captain Jack Harkness (John Barrowman), and the Doctor is sure Captain Jack will probably get around to meeting her eventually.

The Woman Who Lived is a fun historical themed episode, with a dark cosmic mystery resting at the heart of the story, and it’s actually quite moving and though-provoking at times as well. Catherine Tregenna’s script captures the mood and tone of this era perfectly, the Doctor and Ashildr’s moving debates about their immortality is profoundly realized, and the episode is beautifully directed by Ed Bazalgette. Peter Capaldi and Maisie Williams are superb throughout, balancing the humour with the gravatis of their characters immortality, and Ashildr’s story has been handled really well. But once all the laughter, merriment, and thoughtful exchanges are over, this Clara-Lite episode holds some sinister undertones. With the knowledge that Ashildr always takes note of everyone’s weaknesses, along with her self-styled appointment as the Doctor’s patron saint of leftovers, and her somewhat unsettling presence in the background at the end of the episode, it sets up a foreboding portent that might perhaps foreshadows events later in the this season…