Doctor Who The Eaters of Light

It is an enduring mystery, the Roman legion of the ninth vanished in the swirling mists of Scotland long ago in the past. Bill has an uncanny theory about what might’ve happened, and seeing how the Doctor just happens to have a time machine… But once the TARDIS has materialised in ancient Aberdeenshire they soon discover something mush deadlier than a Roman army, because in a secluded cairn there is a doorway, one that leads to the end of the world!

The tenth episode of series ten, The Eaters of Light, is perhaps one of the most eagerly anticipated episode this season, as it is written by Rona Monro, who returns to the series nearly thirty years after her first script for Doctor Who – the highly-regarded 1989 Seventh Doctor adventure Survival. The episode is directed by Charles Palmer, who, along with helming the series ten episode Oxygen., also directed 2007’s Smith and Jones, The Shakespeare Code and the acclaimed two-parter Human Nature / The Family of Blood. 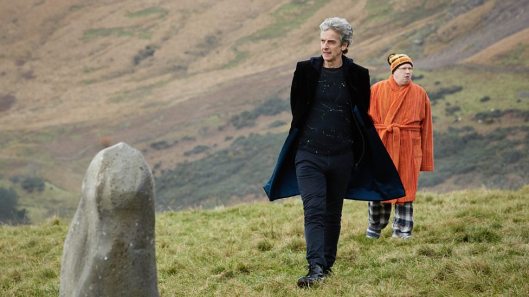 Nardole isn‘t too pleased the Time Lord is off neglecting his oath to guard the Vault again; but he still goes along with Bill and the Doctor to investigate the bizarre mystery surrounding what really happened to Rome’s Ninth Legion who disappeared back in second-century Caledonia in AD120. In this hauntingly evocative episode strange music comes from the earth, the crows are talking, there’s a light-eating monster prowling the night, a Police Box has been carved in a standing stone, and a strange inter-dimensional gateway awaits as the TARDIS trio joins forces with Roman Centurions and Pictish warriors against a terrifying horror like something from Celtic myth that now haunts the lands.

Since she wrote Survival, the last story aired in the class series’ original twenty-six year run, Rona Munro has gone on to become one of the UK’s most renowned playwrights, writing also for radio, TV, and film screenplays. Munro’s wonderful script for The Eaters of Light weaves a magical thread of history, fantasy and sci-fi through this spooky saga of ancient legend, lost youth, and the fate of the Ninth Legion. As well as being a life-long fan of Doctor Who, Rona Munro now also has the added distinction, so far, of being the only person to have currently written stories for both the TV’s Doctor Who’s twentieth and twenty first century versions of the programme. 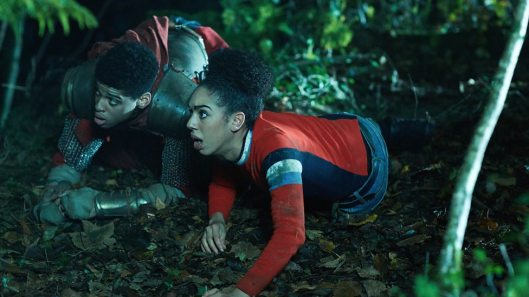 Peter Capaldi gives an especially towering performance as the Doctor in this episode, being both wise and heroic to a fault. Meanwhile, Bill finds this motley and diverse bunch of Roman’s are far more open-minded than she could’ve expected, especially where topics of sexuality are concerned, and Pearl Mackie one again brings a delightful sense of wonder and charm to the role of Bill Potts. Matt Lucas of course gets most the fun lines as Nardole, whose wry observations bring a welcome dash of mirth to the narrative. The Eaters of Light also features a great supporting cast: including Rebecca Benson (Kar), Daniel Kerr (Ban), Juwon Adedokun (Simon), Brian Vernel (Lucius), Ben Hunter (Thracius)), Arron Phagura (Marcus), Sam Adewunmi (Vitus), Billy Matthews (Cornelius), Jocelyn Brassington (Judy), and Lewis McGowan (Brother).

After discovering most of the Ninth Legion has been slaughtered by a “beast” known as the Eater of Light, Bill finds sanctuary with some of the surviving Roman soldiers. Meanwhile the Doctor and Nardole have found the remaining Pict warriors, the sole defenders against the Eaters of Light, whose weapons can refract and poison the light the monsters feed on. Their cairn holds the portal – where time flows more slowly – to the beast’s realm. Once in every generation, a lone warrior must enter to protect the gateway from an invading creature. Though they would survive only a few hours, it would be long enough to protect the world, but the Picts never suspected that each beast they battled was just the first of a deadly swarm that lurks beyond the portal. 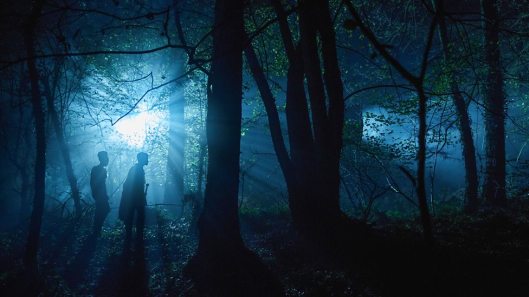 It perhaps comes as no surprise that, much like The Empress of Mars which preceded it, The Eaters of Light also has a distinctly classic series feel about it. Charles Palmer’s excellent direction really makes the most of the impressive scenery. The episode is a bit low action in some places, but there is some great characterization, and the dark and atmospheric setting more than compensates for any lull in the overall pace of the story. This is an episode that once again has the Doctor and Bill separated for part of the story, so we get the Time Lord and Nardole teamed up for a bit, and the banter between them proves quite fun at times.

The Ninth Legion did really exist and they did disappear mysteriously. The Easters of Light is far from the first story in the programmes history to focus on such unexplained events. Real life mysteries have often provided the basis for many Doctor Who stories over the years: such as the inexplicable sightings of the Loch Ness Monster in Terror of the Zygons (1975), the extinction of the dinosaurs in Earthshock (1982), and Agatha Christie’s famous disappearance in The Unicorn and the Wasp (2008), are just a few examples where fact, mystery, and Doctor Who’s timey-wimey fictional world have collided with spectacular results. In the Easter of Light the Doctor’s companion Nardole also refers to the mystery of the Mary Celeste as he chats to the Picts when the Time Lord is absent for two days because of the time distortion while he’s investigating the portal. The abandoned Mary Celeste was found in the Atlantic Ocean in 1872, an enduring enigma, it has never been solved, but the 1st Doctor (William Hartnell) adventure The Chase (1965) had the Daleks appearing briefly on board the Mary Celeste which then frightened the crew into abandoning ship! 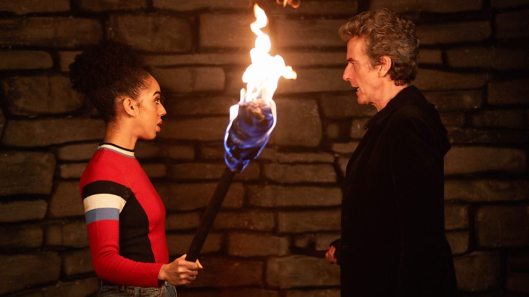 I really liked how the way the TARDIS can translate languages is woven into the story in The Eaters of Light. First discussed in The Masque of Mandragora (1976), when the 4th Doctor (Tom Baker) explained to Sarah Jane Smith (Elisabeth Sladen) how it is a ‘Time Lord gift’ that allows them to understand and interpret local languages. In the modern series its also become something linked to the TARDIS as well – which Bill quickly deduces in The Eaters of Light. It’s a moment that’s pivotal in getting the Roman and Pict survivors to put aside their differences and work together to fight the beast. Following the Doctor’s guidance, they mange to trap the beast at the gateway during daylight. Someone must stay and stop the monsters escaping until sunset. Because of the portals time dilation the Doctor believes only his Time Lord Physiology will enable him to complete the task, but the Kar and the last of the Ninth Legion overrule him and enter the gateway together to finally end this ancient battle and prevent humanity from being cast into darkness forever.

The Doctor offers no definitive explanation for the origins of the Eaters of Light; we get some idea of how these light-eating locusts can breach the dimensional cracks between worlds to feast on light. For the most part, the eponymous “beast” of the story only appears fleetingly. 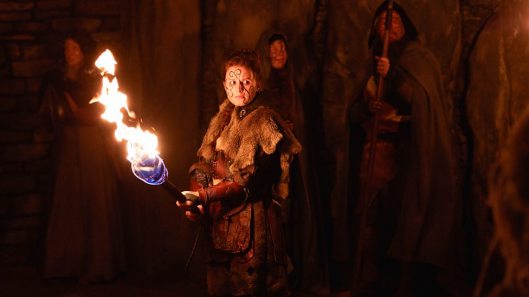 Every hour of sunlight that feeds the monster makes the world darker by the moment. Striking from the shadows, the way it drains the light from its victims and hunts the humans is, initially at least, really effective. Sadly, when the monster finally appears in its entirety for the climatic final battle in the cairn, the CGI rendered creature isn’t that satisfying, which is rather disappointing considering all the effort that’s been put into establishing its threat to the world.

As the Doctor, Bill, and Nardole depart in the TARDIS leaving the remaining Picts to honour Kar’s memory, The Eater of Light has a wonderful coda featuring Michelle Gomez as the ever repentant Time Lady, Missy. It transpires she’s been on board during this adventure the whole time at the Doctor’s behest, doing maintenance on the TARDIS, and also observing their adventure – much to Nardole’s and Bill’s chagrin. We even get to briefly explore the complex nature of the Doctor’s relationship with Missy / the Master in an especially moving moment; and the dramatic tension Peter Capaldi and Michelle Gomez create here in this short scene is mesmerising. 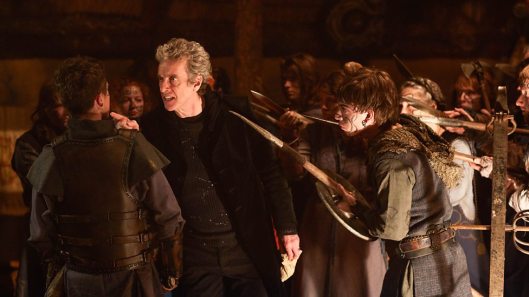 Slightly ropey CGI monster effects aside, The Easters of Light is still an extremely good episode. Rona Munro’s script is bursting with pertinent themes and strong characterization for this final standalone episode of series ten, Capaldi, Mackie, and Lucas are all at the height of their game, and it’s all impressively directed by Charles Palmer. Now the stage is set first part of the big series finale World Enough and Time, and with the incredible ‘next time’ trailer also offering a glimpse of John Simm as the Master, and the original Mondasian Cybermen, I can’t wait to see what happens next!