Having managed to smuggle himself into the Saviors camp and killed some of Negan’s men with an Abraham’s machine gun, Carl is captured and is now Negan’s guest. Negan delights in tormenting his young captive, introducing him to his harem of wives, forcing Carl to remove his bandages and reveal his wounded eye socket, before allowing him to watch as Negan savagely punishes a man who has been foolish enough to have an affair with one of his wives. Negan brands Mark with a hot iron, melting his face, so everyone will know his crime – a knowing look between Dwight and another of Negan’s wives indicates that this is something he once endured as well at Negan’s hands. Negan leads Carl away, telling Carl that he will have to pay for killing his men. 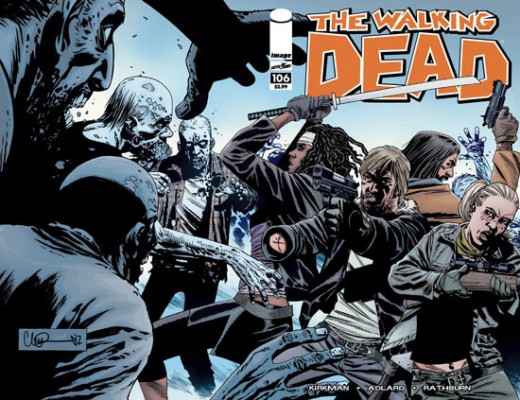 This issues eye catching cover with Rick, Michonne, Jesus, and Andrea grouped together and fighting back the advancing Walkers

After escaping from Negan’s men, Jesus manages to hotwire a car to escape from a pack of Walkers, and sets off for Alexandria to tell Rick where The Saviors camp is. Rick has enlisted the help of Michonne and the others to help him look for Carl, but they are almost overrun by Zombies, and are forced to call off the search and retreat to the safety of Alexandria. Jesus sneaks into Rick’s house while Rick and Andrea are sleeping to tell him what he has discovered about The Saviors.

Together with Michonne, Jesus, and Andrea, Rick takes a van to drive out to The Saviors camp, where Jesus tells them about the undead killing field surrounding Negan’s base, where Zombies have either been staked to the ground or chained to the fences to act as a terrifying first line of defence. Before they can arrive, a truck carrying Negan and his men block their path. Rick gets out and confronts Negan, where Glen’s murderer gloats that he can’t wait for Rick to see what he’s done to Carl!

Robert Kirckman and Charlie Adlard continue to build on the plight of Carl’s perilous situation as The Walking Dead #106 sees Rick going all out to find his son. Not everyone at Alexandria shares his views though, some like Spencer have serious doubts about the choices Rick has made, while Erick and Aaron begin to consider leaving Alexandra for good. While these new character may not have quite the same impact as their predecessors, they have a lot to offer, and provide a clear indication of just how tenuous Rick’s leadership is at the moment.

Negan brands Mark with a hot iron, melting his face

The scenes involving Negan and Carl as they goad one another are extremely chilling, and continue to form the most interesting aspect of this new storyline. Negan may be a ruthless monster, but he’s not as crazy or deranged as the Governor, which perhaps makes him even more dangerous. Although it might seem that this story was initially going to be a retread of the Governor story arc, it’s slowly evolving into something far more unsettling. Carl gives as good as he gets as he stands up to Negan, at times it almost seems as if Negan is encouraging Carl’s violent outbursts, perhaps seeing something that reminds him of his own childhood in Carl. Of all the characters in Kirckman and Adlard’s nightmarish Zombie apocalypse it is Carl who has arguably suffered the most. Having lost everything he’s ever known, with his face now horribly mutilated, Carl’s future could well see him become just as psychotic and twisted as Negan or the Governor should he survive into adulthood.

The Walking Dead #106 contains a good amount of Zombie action this time around, with Charlie Alard’s shambling Walkers making their presence felt at every opportunity to hamper Rick’s quest to find Carl. I also really liked this issues eye catching cover as well that showed Rick, Michonne, Jesus, and Andrea grouped together and fighting back the advancing Walkers. This issue ends with a tense standoff between Negan and Rick, with Carl’s fate still hanging in the balance, and the people of Alexandria doubting his leadership; Rick Grime’s looks set to risk everything in order to rescue his son from Negan and The Saviors.

Having taken his first tribute from Alexandra and humiliated Rick in front of his friends, Negan and his men drive away with their spoils. Determined to get revenge, Carl secretly hides in the truck and gets a ride all the way back to the Saviors camp. Once they are inside the heavily fortified perimeter of the compound, Carl leaps from the truck and opens fire with an assault rifle, killing some of Negan’s men before he is overpowered by Dwight and brought before Negan.

The Walking Dead #105 sees Robert Kirckman and Charlie Adlard place Carl right in the heart of enemy territory, leaving us on the edge of our seat as Negan casually takes the boy under his wing and shows him around. We get to see another, even darker side to Negan as we witness the almost fanatical devotion of his followers, who seem willing to submit to his oppressive regime in return for food and shelter from the Walkers.

Negan introduces Carl to his harem of wives before finally being left alone in the tyrant’s private quarters. What follows is both horrifying and tragic as Negan bullies Carl into removing his bandages to reveal the gaping wound where his right eye used to be, reducing Carl to tears as he callously admires the gory wound of ragged flesh and bone. Negan seems to enjoy threatening his trembling captive, goading and taunting him, before making Carl sing a song while he practices some killing moves with his prized baseball bat Lucille (the deadly weapon he used to beat Glen to death with).

With this scene Robert Kirckman shows just why The Walking Dead is the leader of the pack with its uncompromising vision of the Zombie Apocalypse. This brief moment is really unsettling, particularly when Carl breaks down after Negan forces him to confront the reality of his injuries. This series is never afraid to give its characters room to grow and evolve, even though the pace may seem to slow dramatically while the main characters are effectively sidelined for an issue, it is these quiet interludes that make The Walking Dead so riveting. This issue may be devoid of Zombie action, but Charlie Adlard still captures our attention with ever panel as we follow Carl’s progress through this industrial nightmare. 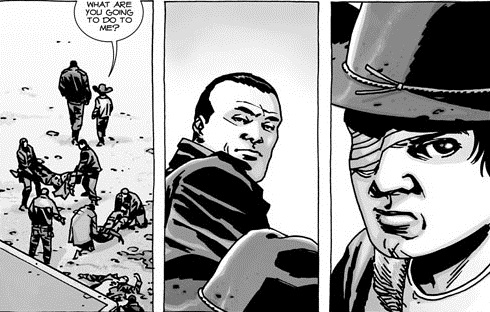 If the scenes between Negan and Carl weren’t unpleasant enough, what follows is a lesson in just how tight a grip Negan has over his followers. On learning that one of his wives, Amber, has “cheated” on him with her former partner, Negan exacts a terrible punishment on the man. To be chosen as one of Negan’s wives is deemed a privilege, one that will ensure the woman no longer has to earn points to trade for goods inside the camp. However, if she is ever caught with another man, that man must then be punished with a molten hot iron and have the flesh seared from one side of his face so that everyone will always know the shame of what he has done.

As Negan brands the offender before a baying mob, a knowing glance between Dwight and another of Negan’s wives seems to indicate the reasons behind Dwight’s horrible scars. With a wealth of unspoken history between Negan and Dwight conveyed in a single panel, The Walking Dead #105 continues to play with all our expectations, and as Negan leads Carl away to face an uncertain fate we are left wondering how on earth he is going to escape this hellhole alive.