for the Season 10 Finale!

A new image has just been released for the Doctor Who series 10 finale, featuring Missy (Michelle Gomez) and the Master (John Simm) together for the first time. The pair are seen either side of the Doctor (Peter Capaldi) as they put their own chilling spin on the iconic poster image that previously accompanied Doctor Who’s 50th anniversary special, The Day of the Doctor. 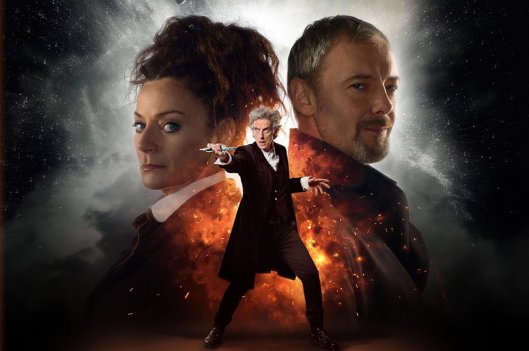 Simm is returning to Doctor Who as the Master for the first time since New Year’s Day 2010, when he was instrumental in brining about the Tenth Doctor‘s regeneration. Now the Master will come face-to-face with Missy, his own later regeneration, and battle the Doctor in the series’ two part finale which begins next weekend.The episodes also feature the return of the Cybermen – including the original Mondasian Cybermen, for the first time in over 50 years. Peter Capaldi’s 12th Doctor is accompanied by Bill Potts (Pearl Mackie) and Nardole (Matt Lucas) in an epic story that will change Doctor Who forever!

Doctor Who’s series finale begins with episode 11, World Enough and Time, at 6:45pm on Saturday 24 June on BBC One. It concludes on Saturday 1 July with episode 12, The Doctor Falls – an extended, 60 minute episode.