The biggest upheaval in Iron Man’s history begins in Invincible Iron Man #12 as the events of Civil War II start to tear Tony Stark’s world apart. This issue is a major Civil War II tie-in, divisions have formed, and concerns are mounting that Tony is about to go to war with Captain Marvel because of the precognitive Inhuman known as Ulysses! But Tony’s role as Iron Man and the fate of his company will soon hang in the balance, and what has Doctor Doom been planning as all-out Civil War strikes the Marvel Universe?

From the moment you see this issue ominous looking cover by Mike Deodato, featuring a dark figure with an arc reactor stood atop a pile of rubble strewn with the Stark logo, it’s clear that some major upheaval is waiting in the wings for Tony Stark. With the recent announcements from Marvel that 15 year-old MIT student Riri Williams is all set to become the new Invincible Iron Man post Civil War II and that Victor Von Doom will also become the Infamous Iron Man, Tony Stark will soon be replaced by two brand new Iron Men!

The build up to these sweeping changers starts here in Invincible Iron Man #12, as writer Brian Michael Bendis kicks everything off with some pretty cataclysmic developments over at Stark Tower. From here we flashback to a press conference held weeks ago in the same aforementioned building, where Tony Stark apologized to his investors and employees for faking his death so that he could assist S.H.I.E.L.D and the Avengers with the international terrorist threat poised by Techno Golem Tomoe and her biohack ninjas in Japan. 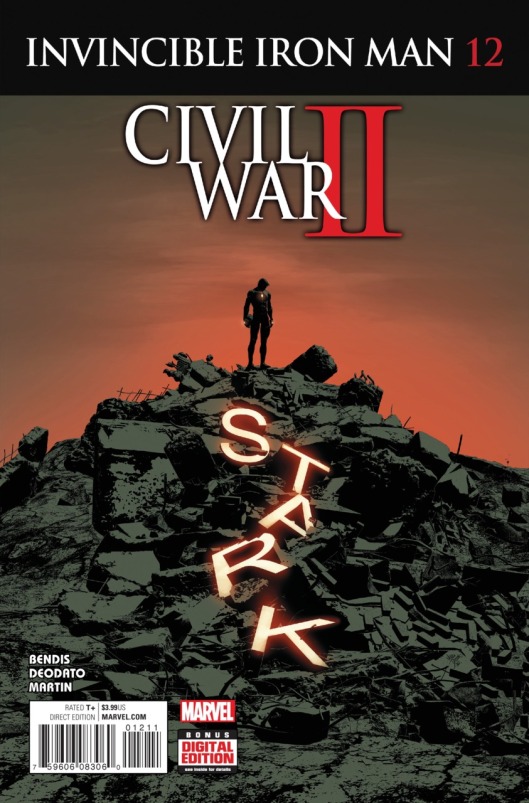 I love the way that Bendis handles the scenes where Tony confronts his board of investors. The dialogue is witty and sharp, some major home truths are aired on both sides, but even with MJ and his AI Friday to back him up, it’s clear the board isn’t going to let this one go without a fight. Mary Jane Watson and Friday also make a great team here, and they certainly keep Tony on his toes! If all that wasn’t enough, Tony also has some making up to do with new love interest Amara as well, something which proves far more elusive to resolve than expected.

Mike Dedato’s brilliant artwork skilfully conveys the emotional depth and narrative of this tautly scripted issue. His work on Invincible Iron Man continues to play to Bendis’ strengths as a writer. This issue features some gorgeously detailed page layouts: the apocalyptic opening scenes amidst the swirling rubble and dust are hauntingly powerful, the press conference and scenes in the lab flow with seamless precision, our first glimpse of Riri Williams home life with her mother in Chicago are another big highlight of the issue, and the raw emotional roller coaster ride of scenes which later follow as Stark’s world begins to come tumbling down around him are magnificently depicted. Color Artist Frank Martin once again excels, velvety earthy tones and dusty greys dominate the early scenes, while the use of dusky shadows and refined hues delicately accentuate the diverse range of emotional beats of that make this issue such a compelling read.

That wonderful first meeting between Riri, her mother, and Tony is certainly a defining moment for everyone involved. It’s great to finally learn more about this 15 year old genius M.I.T student, her mother certainly seems a force to be reckoned with as well, and we also discover something rather poignant about Riri’s name too.

Invincible Iron Man #12 finishes where it begins. It is here that we actually witness the most powerful scenes, as Tony addresses Rhodey’s death – which tragically happened in Civil War II #1 – and his thoughts about Carol Danvers and the Inhumans are revealed to a somewhat shell-shocked audience amidst the ruins of his life – and it is in these moving scenes that Brian Michael Bendis’ stellar writing will leave you hanging on Tony’s every word.

This run on Invincible Iron Man by Brian Michael Bendis and Mike Deodato reaches even greater heights with this issue. While it might be light on actual Iron Man action, the drama, suspense, and impeccable characterization are elevated to a whole new level with this Civil War II tie-in, and the cliff-hanger ending looks like it has the potential to be a real game-changer for the series. Invincible Iron Man #12 branches out into the wider arc of Civil War II with assured confidence and paves the way for even bigger events to come!