Well, now that DC Universe Rebirth #1 has set the ball rolling, its time for the rest of the DCU titles to follow suit. Batman Rebirth #1 builds on the events of that landmark 80 page one-shot Rebirth issue, with a rejuvenated Bruce Wayne / Batman, who is also now restored to the peak of his mental and physical prowess. This issue marks another rebirth of sorts for DC’s main Batman title, with Tom King (Grayson, Omega Men) now taking over writing duties on Batman from Scott Snyder (Although Snyder does co-write this issue with King), and together they kick-start a whole new era for the Dark Knight detective.

Batman Rebirth #1 throws us right into the thick of the action, the narrative unfolds across the accelerated seasons, with Batman dealing with a dire threat to Gotham, while Duke Thomas makes a major decision, and Lucius Fox has a poignant meeting with Bruce Wayne. I like how the issue embraces the concept of Rebirth wholeheartedly to bring a us fresh perspective to many of the established elements in the Bat-Books, there’s almost a sense of passing the baton so to speak, as we begin to move on from Scott Snyder and Greg Capullo’s run and Tom King starts to bring his vision for the character into sharper focus. The story meanders in a timey-wimey fashion somewhat, but that’s probably to be expected when the main antagonist in this issue Calendar Man. 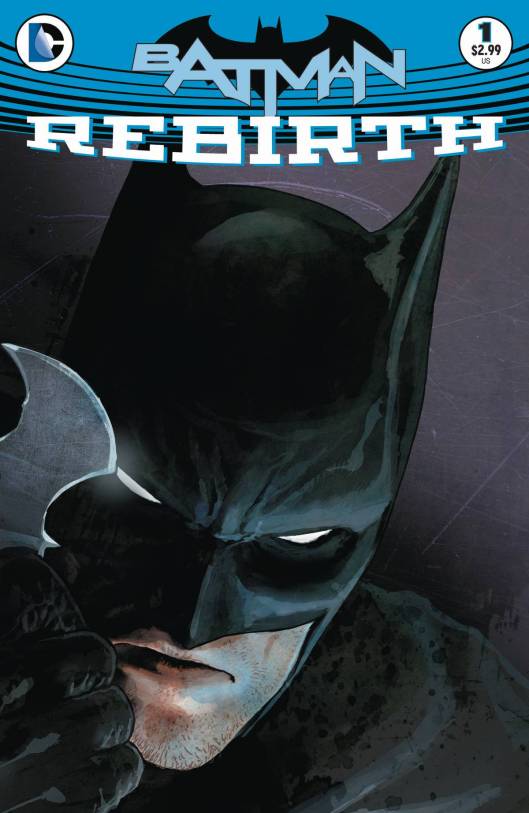 Calendar Man might seem a like strange choice of villain for this Rebirth issue, especially as he’s not exactly from the higher echelons of Batman’s rogue gallery, but he actually turns out to be a perfectly fitting choice for this story and Batman Rebirth overall, and his scheme here presents Batman with a major challenge. This version of the Calendar Man arguably takes the seasonal themes on which his crimes are always based to a whole new level, it was something I wasn’t expecting, and the character gets a much needed overhaul that effectively sees Calendar Man reborn in the most unique and unsettling way over the course of the story as well.

With its striking cover and impressive artwork by Mikel Janin, and fine colors by June Chung, Batman Rebirth #1 is certainly an eye-catching issue. There are some truly stunning set-pieces, especially those involving Batman’s confrontation with Calendar Man, a vertigo inducing work out, some intense underwater action, and Duke’s inauguration into Batman’s world continues to offer up something entirely new and unexpected. Seriously, the Bat-Cave looks stunning in this issue, the scene with Lucius Fox is also especially moving, and there’s a terrific bond that’s developing between Bruce and Duke as well that is sure to bring a whole new dynamic to the Dark Knights world.

Batman Rebirth #1 is an action-packed, emotional, and thoughtful issue. We now begin to get a greater sense of how DC Rebirth will resonate through the legacies of all the major DC characters, and if the rest of the Rebirth issues are half as good as this, the DCU is well on the way to reinvigorating their characters in fine style.

In short, I’d recommend Batman Rebirth #1, and I’m really looking forward to what Tom King and David Finch have in store for the Dark Knight even more now. Featuring a solid storyline, powerful and emotional scenes, a new role for Duke Thomas, and Calendar Man’s stomach churning – sure to make you recall a certain forth season X-Files episode – rejuvenation, Batman Rebirth #1 heralds a promising new chapter for the Dark Knight. One thing’s for sure though, no matter what the future might hold, the word can’t is still something that will never, ever exist in Batman’s vocabulary!