After months of speculation and rumours, the origin of the new Batman of Earth 2 is finally revealed. It is a tale that follows the original Batman’s investigation into a series of brutal murders, where each of the victims skulls have been crushed by someone with enhanced strength. Batman visits crime boss Frankie Francavilla to find the connection between the victims, and learns Francavilla also knew Thomas Wayne. Having discovers the truth behind his parents murder Batman tracks down the man killing Francavilla’s men, a man destined to become the New Batman of Earth 2 and claim the mantel of the Bat as his own…

Ever since the new Batman first appeared in the Earth 2 Annual #1, the speculation about his identity has continued to build month after month, with each issue he subsequently appeared in teasing us with even more hints and clues about who he might be. Now as the forces of Apokolips begin their invasion, the identity of this mysterious character is finally revealed in this months eagerly waited Earth 2 Annual #2. Since Tom Taylor took over writing Earth 2 expectations for this issue have been high, so I’m happy to say that Taylor has really surpassed himself with this issue. 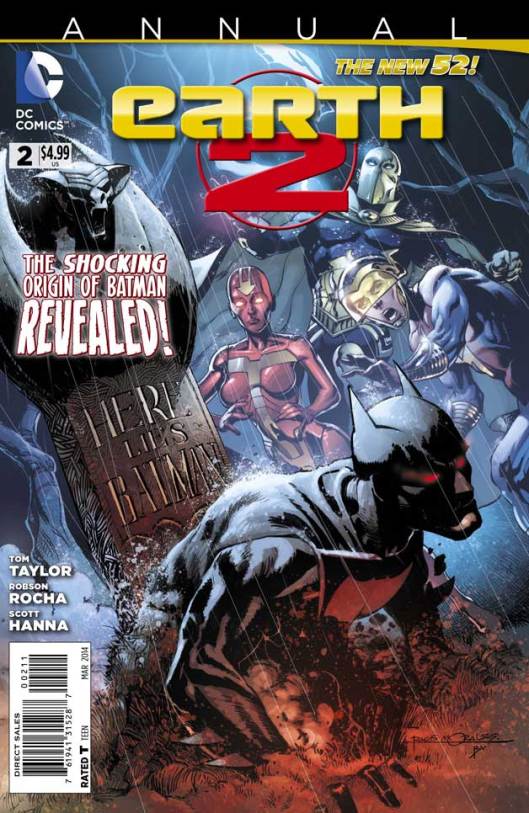 Taylor sets the tone perfectly from the outset, as the gunshot rings out on that fateful night in Crime Alley, before we rejoin the story in 1994 as the original Earth 2’s Batman examines a corpse in the Gotham morgue. I like how Batman’s investigation ties directly into the man who killed his parents, Joe Chill, which in turn then leads the Dark Knight to Frankie Francavilla and the discovery of the events leading up to the murder of Thomas and Martha Wayne.

I like the banter that Taylor writes between Alfred and Batman as he prepares to break into Francavilla’s mansion, where we learn Batman has just spent the last two years training with the League of Shadows. After the Dark Knight has gotten Francavilla to talk, his story about Thomas Wayne proves an enlightening one, as we discover how Wayne became drawn into crime lord’s circle of friends and met Martha for the first time. However, when Thomas marries Martha and Bruce is born, Wayne’s friendship with Francavilla turns sour, and Thomas quickly finds that Frankie Francavilla is not a man you can simply walk away from…

Frankie finishes his story as the killer attacks the mansion and begins shooting the guards. Batman rushes to confront the balaclava clad intruder, but soon finds he is no match for the killers enhanced strength.  Even though he is injured, Batman stands his ground, telling the assailant that Francavilla will answer for his crimes. The Batman’s words seem to get through to the intruder, who suddenly breaks off the attack and escapes into the night.

Earth 2 Annual #2 looks amazing. Robson Rocha’s pencils and Scott Hannah’s inks perfectly convey the dark, brooding atmosphere surrounding the new Batman’s origin. The flashback sequences are really good, especially the opening in Crime Alley, which has very a surreal and nightmarish quality to it.  Its very clever how the scenes involving Thomas Wayne are intercut with Francavilla as he talks to  Batman, while Peter Pantazi’s colors also helps enhance the different time periods, ensuring the narrative never  once feels stilted, or forced. 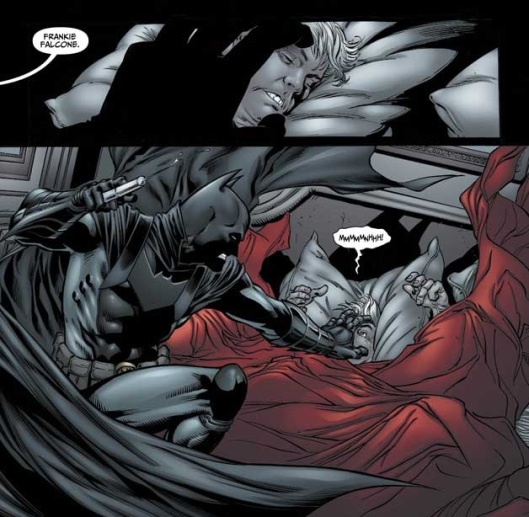 It’s also good to see the original Batman in action again, as we only really got to see him for one issue before he sacrificed himself to save the world. We get to see Batman searching for clues at the morgue, he frightens the living daylights out of Francavilla in the mansion, and the fights between Batman and the masked killer are also really fast and brutal. Taylor keeps us on the back foot, right up until the very end, until Batman follows the killer to the place where their lives will converge in the most startling discovery of all.

Cometh the hour, the time comes for the new Batman reveal his true identity to his allies. The origin of this character, while steeped in the legacy of the Bat, also splices other aspects from the Golden Age to deliver an unexpected dose of nostalgia in a way few could have predicted. However, now this Batman’s allies know his strength, as well as weaknesses, we are left wondering if they will ever be able to trust him in quite the same way again?

I really enjoyed the Earth 2 Annual #2; in fact, the story was so good I wanted to read it again immediately. Tom Taylor has crafted a brilliant origin for Earth 2’s new Batman, it’s been a long, agonising wait, but it’s sure as hell been worth it!