With the fate of the world resting heavily on the shoulders of Earth 2’s reluctant new hero, various battles rage around the world, as the final World Army command post is crushed by the evil Superman and the hordes of Apokoilips. Batman and his new allies can only watch as events unfold. Commander Khan oversees his forces after they retreat to their last safe haven, meanwhile a secret project make preparations to abandon this doomed world, and having set Superman’s prisoners to work Bedlam makes a startling discovery…

Earth 2 #21 doesn’t exactly hit the ground running, instead Tom Taylor grabs you by the arm right from the very first page, and then proceeds to drags you dizzily through an action packed issue filled with brutal violence and more than a few surprise plot twists to keep you on the edge of your seat. The Kryptonian Part 1 pulls no punches, the evil Superman’s reign of terror has crushed the World Army and the New Wonders that opposed him, leaving the survivors from the carnage scattered and dazed by the ferocity and sheer speed with which Darkseid’s herald and his Parademons horde have decimated all resistance.

Earth 2 #21 is epic in scope and scale: from the opening battle in Moscow, events spiral outwards from Gotham, taking in the wonder of Amazonia, and even the majesty of Altantis itself. Perhaps most striking of all though is Project Beyond, a privately funded initiative by the rich and powerful, which despite their desperate attempt to abandon Earth, proves that in the end all the money in the world is ultimately worthless when you suddenly find yourself at the back of the queue just as the shit is about to hit the fan. 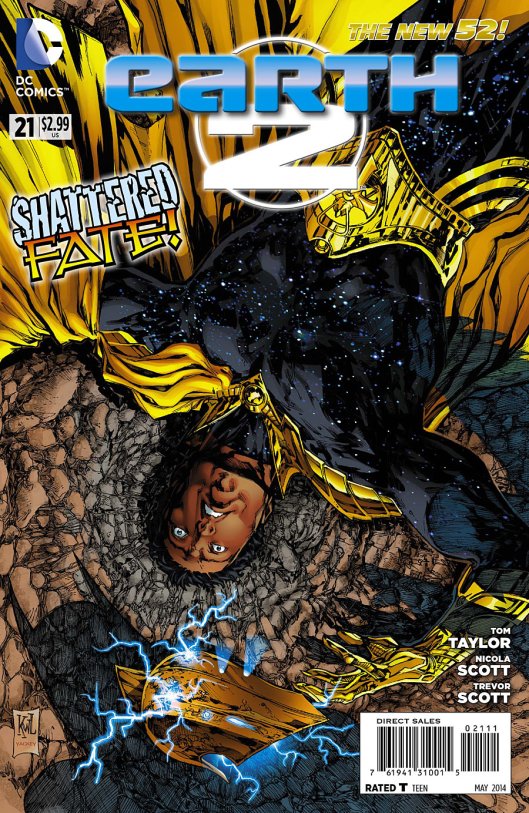 We also get to catch up with Commander Khan this issue, his shock and guilt about what he perceives as his failure as commander of the World Army is almost palpable as Colonel Dodds reports how many people he was able help evacuate. Tensions are still running high back at the Batcave as Batman and Red Arrow argue, Lois / Red Tornado intervenes in a great scene, being openly critical of  the new Batman’s tactical skills compared to his predecessor, who she knew was a tactical genus, and urges him to take decisive action while they wait for Val’s powers to develop.

The art by Nicola Scott for Earth 2 #21 looks as good as ever, with inks by Trevor Scott, their work elevates the thrilling events of this story further still, especially with the world wide scope that this issue presents them with. The numerous locations featured in Earth 2 #21 are vividly brought to life by Nicola Scott’s art, the attention to detail here is astounding, which, together with Trevor Scott’s inks and striking colors by Peter Pantazis, really encapsulates the increasing darkness of the apocalypse that Taylor has unleashed on this alternative world. This is brutal stuff as well. The opening scenes in Moscow, where the Atom valiantly stands his ground against Superman, are shocking and violent in the extreme. The carnage continues as Project Beyond meets a particularly nasty end on the edge of space after Superman makes an example of them.

Its not all doom and gloom though, we do fortunately have some lighter moments, especially after Major Sato manages make contact the World Army. Jimmy Olsen is quickly becoming one of my favourite characters, not only does he point out everyone’s arguing in the Batcave isn’t exactly helping to inspire Val’s confidence un humanity, the scene where the young super genus  hacks into a conference call between Commander Khan and Aquawoman is priceless; especially the banter between Olsen and the Queen of the Sea.

As Earth 2 #21 draws to a close we are also reunited with Mr Terrific, Terry Sloan, and Mr Miracle, as Bedlam begins to instigate the next stage of Apokolips’ master plan for Earth 2 and its civilization. These closing moments also lead to the fateful discovery of a secret that could change everything.

Tom Taylor cerographs the action perfectly, with each scene moving seamlessly to the next big event, and the series certainly seems to be building towards a titanic showdown. I also really liked that we got to see so many different locations and characters in this issue, sure it’s taking a while for everyone to regroup, but I think that really helps build the suspense as the World Army and the New Wonders formulate their plans – unaware of the knowledge gained by the forces of Apokolips that could now force their hand in the battle to come.

I would have liked to have seen more scenes with Hawkgirl and Dr Fate, especially as the brilliant cover for Earth 2 #21 by Ken Lashley and Matt Yackey featured Dr Fate so prominently, but that minor quibble aside, I really enjoyed this issue and can’t wait to see what Tom Taylor does next with Earth 2, especially now that Superman looks really, REALLY, angry! Bring it on!!!