A new era begins in Doctor Fate #1 as a storm rages over Brooklyn., the Egyptian Lord of the Dead is set to unleash a terrifying flood upon the world, and soon the young Egyptian-American med student Khalid Nassor will become the next person to wear the fabled helmet of Fate – but learning to control his newfound mystical abilities will prove far from easy…

DC Comics brand new Dr Fate series, written by Paul Levitz, together with art by Sonny Liew, colors by Lee Loughridge, and letters by Nick J. Napolitano, ushers in a bold new direction for the character.

Doctor Fate #1 follows on directly from events seen in DC’s free Dr Fate Sneak Peak, as Khalid Nasser takes refuge from the storm in the Brooklyn Museum, and encounters an exhibit where an unearthly voice reveals that Amun-Ra has decreed that he use the helmet of Fate to save the world from the flood Anubis has released to usurp the natural order of things. 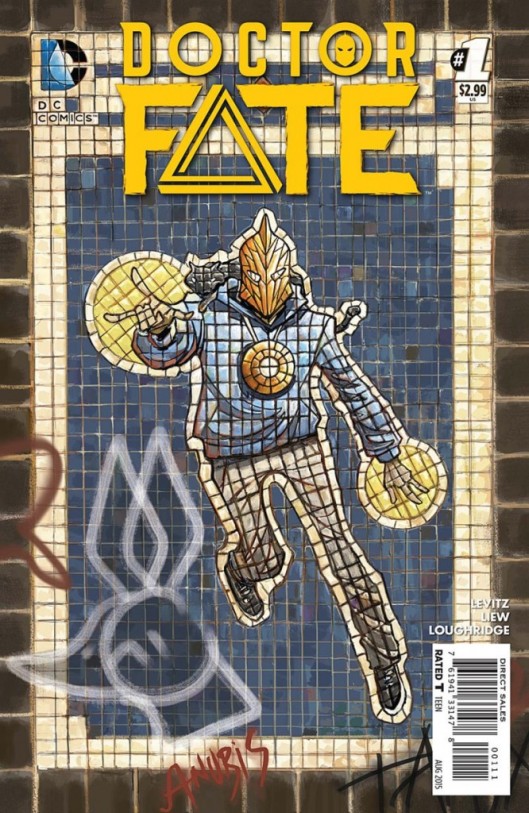 Blood of the Pharaohs is an engaging and thoughtful opener to this new Dr Fate series, there’s plenty here for fans of the character to enjoy, and it also provides an excellent jumping on point for new readers too. Paul Levitz skilfully mixes the myth and magical elements with Khalid’s life in the modern world. Freaked out by what he’s seen, Khalid legs it out of museum and decides to make his way home on the subway. Levitz uses this opportunity to introduce us to Khalid’s world as he ambles down to the platform: there’s a fun series of text messages between Khalid and his girlfriend, Shaya, a call from his mom, his cat, Puck, meanders home between the raindrops, and Khalid’s dad is busily driving an irate passenger to the airport in his cab.

Considering how Dr Fate has spent the latter half of his time in The New 52 either being beaten senseless or left raving half out of his mind, this new version of Khalid / Dr Fate comes across as just an everyday student, someone with an everyday life and family, and it brings a refreshingly modern slant to the character.

With his distinct sketchy cartoon style, Sonny Liew’s artwork is a perfect fit for this modern take on the character, and it brings Levitz’s magical blend of Egyptian mysticism, wry humour, and brooding atmosphere together with the legacy of Dr Fate to craft something very special indeed. The characters expressions are rendered beautifully, conveying every nuance and emotion. The rain swept streets of Brooklyn look brilliant, I adore how Puck the cat wanders so casually through the narrative, its sublime, and the big set-piece in the subway station is absolutely thrilling. The colors by Lee Loughridge gloriously complements Levitz’s art with vividly eloquent tones, and the letters by Nick J. Napolitano bring a distinct edge and heightened sense of clarity to the issues most pivotal scenes.

As the fates converge the time comes for Khalid to accept his destiny, the issue brings this origin story full circle, and a new Dr Fate emerges amidst a wonderful mosaic of images that meld reality and magic like never before. Throw in this issues closing, and somewhat sinister final scene, and you will be left eager for more. Sonny Liew’s imaginative cover is amazing, it really makes this book jump out at you, and I also really liked Ibrahim Moustafa’s variant cover as well. I think Paul Levitz has done a fantastic job with the characters and the storyline for this first issue, the premise works so well, and with Sonny Liew’s excellent artwork, Doctor Fate looks set to become one of DC’s standout new titles of 2015.