Ascension of the Cybermen

In the distant future the Doctor and her companions face a brutal conflict in Ascension of the Cybermen. A war between humanity and the Cybermen has raged across the farthest reaches of space, and now the Doctor must do whatever it takes to save the last remnants of the human race from the relentless onslaught of the Cybermen!

Written by Doctor Who show runner Chris Chibnall and directed by James Magnus Stone, Ascension of the Cybermen gets the first half of Series 12’s eagerly anticipated two-part finale off to a great start. Seeing how the 13th Doctor’s already defeated a Dalek in the 2019 New Year’s Day Special Resolution, it was inevitable the Cybermen would be next on the list of classic Doctor Who monsters for her to confront next. 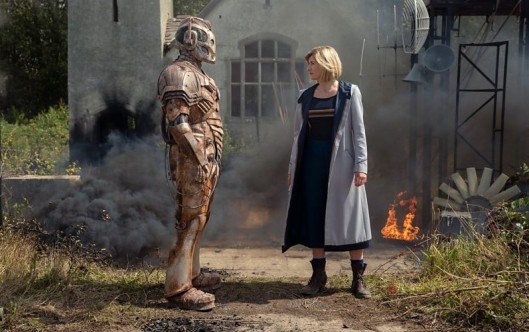 The Doctor (Jodie Whittaker) has already faced the Lone Cyberman, Ashad (Patrick O’Kane), in The Haunting of Villa Diodati, where she made a fateful choice, and now together with her companions Ryan (Tosin Coyle), Yaz (Mandip Gill) and Graham (Bradley Walsh) she must fight the Cybermen in force, who return with their previous Nightmare in Silver redesign now sleekly updated (including new handles!), and seemingly more ruthless than ever!

Having given the Lone Cyberman the Cyberium (The embodiment of the Cyber-Races knowledge and history) the Doctor and her friends have travelled far into the future in Ascension of the Cybermen, to a ravaged planet during the immediate aftermath of the Cyber-Wars. The Cybermen have wiped out the majority of the human race, but the Cyber-Race has also been decimated. Now the last refugees of humanity are on the run from the last of the deadly Cybermen, it has brought them all to this dark corner of the universe, and the final battle in which the Doctor must prevent the Lone Cyberman from rebuilding the Cyber-Army!

Opening with the ominous aftermath of the Cyber-War in space (featuring a stunning transition through the eye of destroyed Cyberman into the title sequence), the Doctor and her companions soon end up facing some pretty extreme situations in Ascension of the Cybermen. Fortunately they find some help in the form of Ravio, played by Shetland star Julie Graham, as one of the desperate human refugees still battling for survival against the Cybermen on this planet – one of the last settlements of humanity in the universe. Despite brining countermeasures specifically attuned to some of the Cybermen‘s previously known weakness, the Doctor’s initial plans to help the human refugees fails when two Cyber Shuttles arrive, brining the Lone Cyberman and his Cyber-Guards to the planet – along with some especially lethal Cyber-Drones as well! The TARDIS team get separated during the attack, with Graham and Yaz fleeing with the surviving humans in their Grav-Raft vessel while the Doctor, Ryan and Ethan (Steve Toussaint) escape in one of the Cyber-Shuttles.

Intriguingly it transpires that Ravio and her fellow refugees are in search of something called Ko Sharmus, the fabled boundary to the gateway which they believe will allow them to escape to the other side of the galaxy. Chris Chibnal’s scrip is packed with action and suspense as the Doctor and her companions work alongside the refugees as they split into two teams, with each encountering vastly different outcomes during their quest to reach Ko Sharmus.

Another major subplot of the episode revolves around the mysterious flashbacks to 20th century Ireland involving Brendan (Evan McCabe), the child abandoned at birth whose life unfolds over the course of Ascension of the Cybermen as he’s adopted by a young couple and grows up and becomes a Police Officer. He even gets killed in the line of duty at one point but miraculously seems unable to die – in a way that seems strikingly similar to Captain Jack Harkness! There is also an especially disturbing sequence involving Brendan near the end of the episode, where he is confronted by sinister versions of his father and mentor, although quite how this man’s life relates to humanities struggle against the Cybermen in the future remains a mystery for now. He presents a wealth of possibilities and no doubt Brendan’s story will be resolved in the second half of this series finale. 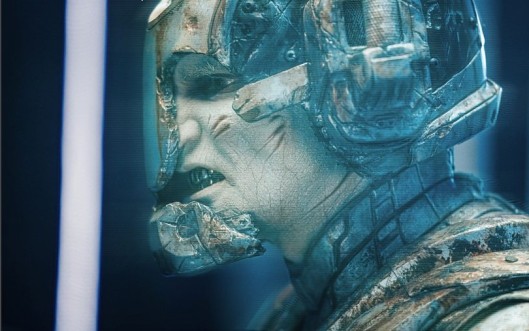 Patrick O’Kane is also back as the Lone Cyberman, Ashad, he’s every bit as frightening as he was before, and perhaps even more so this time around now that the stakes have become so high. The Lone Cyberman makes for an imposing figure as he strides though a flaming battle scene, his chilling presence is almost palpable as he corners Ethan in an abandoned building, and he seems to delight in his power almost malevolently. In fact he seems quite emotional at times for a Cyberman. It is in his unsettling holographic communiqué with the Doctor on the Cyber-Shuttle where the Lone Cyberman seems almost frighteningly unhinged, believing himself to have been chosen to revive the Cyber-Race and instigate the death of everything!

Impeccably directed by James Magnus Stone, Ascension of the Cybermen gradually draws the numerous strands of the plot together in the most exciting and ingenious way imaginable. Graham, Yaz, and the human refugees find a huge Cyber War Carrier drifting in deep space. This eerie scene is littered with countless bodies of dead Cybermen floating in the void. The human refugees believe they’ve found a ship to help them reach Ko Sharmus, instead they discover this vast carrier holds a sleeping army of Cybermen, and when the Lone Cyberman arrives he quickly sets about reviving them.

These new look Cybermen Warriors have been subtly redesigned enough to make them seem fresh and revitalised for their return. Featuring sleeker armour, a chrome-like finish, spikes, and a head reminiscent of the Invasion style Cybermen from 1968 to complete their new image. The new Cybermen look amazing, an unrelentingly powerful force to be reckoned with, and I got a distinct Earthshock vibe watching the Cyber-Army marching though the cavernous interior of the War Carrier. I was quite shocked how the Lone Cyberman seemed to terrify the new Cybermen as they were revived – scary to think there’s a being frightening enough to actually make a Cyberman scream!

Meanwhile, the Doctor, Ryan and Ethan are astounded when their journey reveals that Ko Sharmus isn’t a location, it’s actually a person! On this strange world they’ve discovered the man called Ko Shamus (Ian McElhinney) explains that he remained behind to help other surviving humans escape the Cybermen. He also leads the Doctor to the boundary, where the gateway-like portal opens to reveal the ruins of Gallifrey beyond, and the Master (Sacha Dhawan) suddenly steps though the portal to confront her! With Graham and Yaz facing an army of Cybermen in space and the Master gloating to the Doctor that everything is about to change forever, Ascension of the Cybermen delivers one of the best cliff-hangers of this entire series.

It seems this time the Doctor may well have put her companions in terrible danger – more than perhaps even she can handle! The Lone Cyberman has achieved his goal with the revival of the Cyber-Army, the revelations about Ko Sharmus were certainly unexpected, and the surprise return of the Master rounded the episode off perfectly.

Featuring terrific performance all round, Ascension of the Cybermen is a superb return to form for the series. It had the Doctor and her friends on the run from numerous threats, the danger from the Cybermen has never been greater, and the episode builds to a game-changing cliff-hanger that has the Doctor, Graham, Ryan and Yaz in a situation that looks seemingly impossible for the TARDIS team to ever reunite or escape from.

As you probably all know I’m a big fan of the Cybermen, so I’ve been really looking forward to their return in these episodes, and I’ve been very impressed with the results. I thoroughly enjoyed Ascension of the Cybermen, it was a thrilling, action packed episode, and I can’t wait to see how everything’s resolved in the final episode of Series 12: The Timeless Children.