Gotham is gripped by chaos, marshal law has been declared, and Commissioner Bard is in league with Hush. Now that Batman and his allies know the truth about Bard’s alliance with Hush, and with Catwoman, the daughter of the Lion, determined to reassert the natural order of crime in Gotham, all Hell is about to break loose in Arkham Asylum. The spirit of Deacon Blackfire has possessed Maxi Zeus, the Deacon and his supernatural forces now control Arkham. Batwing and Jim Corrigan are trapped. The power of the Spectre is all that can help them now, but the Deacon has other ideas, one that will unleash Hell on Gotham City itself!

The pieces of Hush’s grand design begin to fall into place in Batman Eternal #29, as the Dark Knight evaluates the full extent of the corruption within the GCP, Bard’s betrayal, and the nano-swarm in the Narrows. The City of Shadow and Doubt also brings Arkham’s role in events to the fore, in this dark storyline by writers Scott Snyder and James Tynion IV, with script by Ray Fawkes, and consulting writers Tim Seeley, and Kyle Higgins, as Batwing and Jim Corrigan face the supernatural resurrection of Deacon Blackfire in Arkham Asylum. 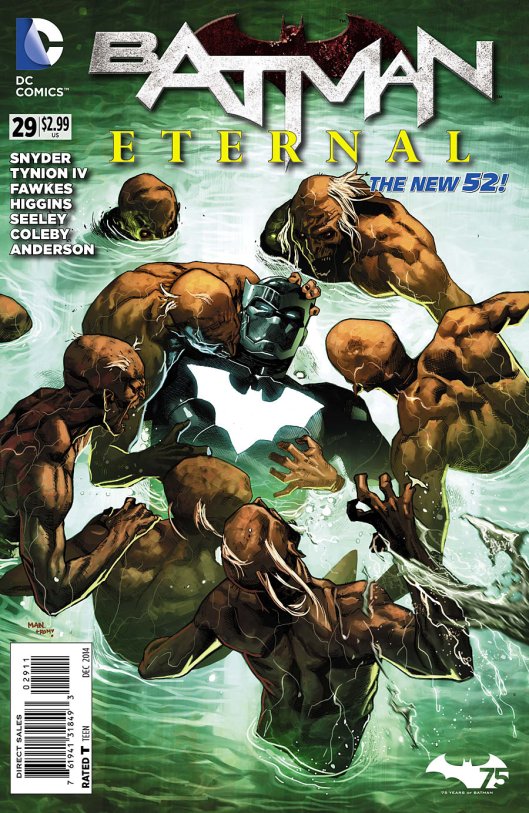 Batman Eternal #29 picks up this supernatural subplot with ghoulish relish, the sight of Alfred alone, raving in a cell, driven out of his mind after Hush injected fear toxin directly into his brain, is enough to send chills down the spine. There are some disturbing interludes with the Joker’s daughter, Hush is also stalking the streets of Gotham, implementing another stage in his plan, and Batwing has to claw his way back through Arkham after becoming separated from Jim Corrigan – who is now at the mercy of Deacon Blackfire.

Batwing’s struggle to escape from the phantoms beneath Arkham, trapped underwater, with his air supply running out, is another highlight of this issue. Its good to see how Batwing manages to cope with his predicament, especially with so many of his suits systems offline, he’s able to fight back against the supernatural forces and re-establish his com-link with Batman. This leads to a great scene, were Alfred’s daughter, Julia, now acting as Penny Two, is able to coordinate their efforts from the cave, and work together to attempt to decipher the cryptic code from the Riddler’s cell that Batwing’s suit has been analysing.

The art by Simon Coleby really helps to build the dark and sinister tone of this issue. The exterior scenes in Gotham, especially those featuring Hush and the Joker’s daughter, bring us right down to street level, while Batman takes to the air to tackle the GCPD’s heavy handed approach to the civil unrest in Gotham. Coleby’s art brings a dark, gritty tone to a variety of locations and characters, each superbly defined and illustrated, which, together with Romulo Fajardo JR’s intricate colors and subtle tones, really enhances the brooding atmosphere of impending dread that permeates every aspect of this issue as events unfold in Arkham.

Batman Eternal #29, with its diverse plot, extensive cast of characters, and spellbinding action, is the culmination of several plot threads that have been developing for a while now over the course of this weekly series. This issue builds to a nerve jangling climax; as Batwing races to save Jim Corrigan from Deacon Blackfire’s power, and the paranormal shocks and twists continue right up until the final page. Batman Eternal #29 continues to impress on every level, with its great story and art, this excellent issue sets the stage for some significant developments at Arkham Asylum just in time for Halloween!