With the chaos unleashed by Mr Bloom engulfing Gotham, the time has finally come for Bruce Wayne to reclaim his past in Batman #49, as he descends into the Bat-Cave to face his destiny. But can Bruce truly find it in himself to sacrifice his new life free of the shadow of the bat that easily? Can he embrace the legacy of the Bat again, to confront the past and become one with all the horror, madness, and violence that consumed him before as Gotham’s Dark Knight Protector. Now, in this special issue the fates of Bruce Wayne and Batman converge once more, and the Dark Knight’s world will never be the same again…

Last issue saw Gotham’s new Batman, Jim Gordon, captured by the gargantuan Mr Bloom, while the new super-villains super-powered-seed army emerged to wreak havoc. Meanwhile, Bruce Wayne, having begun to recover the memories of his former life as Batman, suddenly encountered the Joker, whose memories of his past life as the Clown Prince of Crime have also seemingly been wiped away like Bruce’s were after their violent showdown in Endgame. Now in Batman #49, part nine of the Superheavy arc reaches a major turning point, as writer Scott Snyder and co-writer James Tynion IV, together with artist Yanick Paquette, and colorist Nathan Fairbairn, bring us Bruce’s darkest, most challenging ordeal so far as he prepares to risk everything to become the Dark Knight once more…

It has all been building towards this moment, now its here at last! Alfred is now all that stands in the way of Bruce Wayne rediscovering the full knowledge of who he really is in Batman #49, as Scott Snyder and co-write James Tynion IV steer Bruce on a journey that will encompasses a myriad of infinite possibilities which will test his resolve, willpower, and perhaps even his sanity, as an inexorable date with destiny looms. 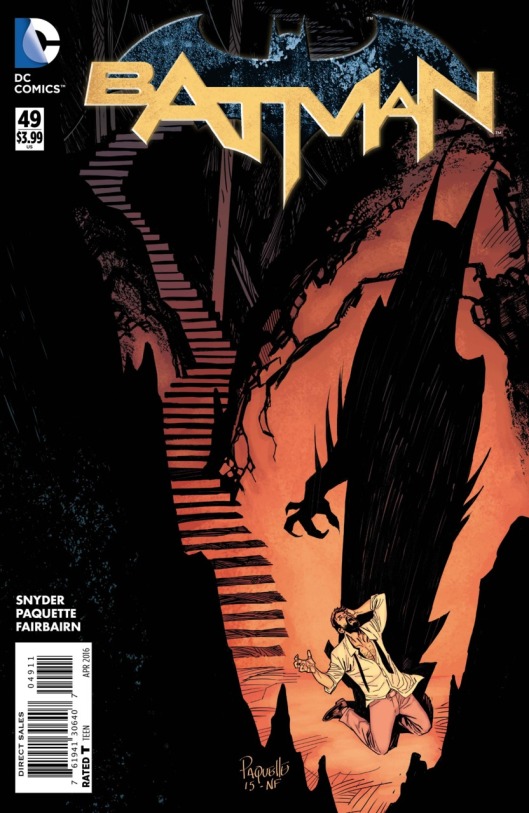 The copious multi-layered aspects of Bruce’s life that Snyder and Tynion IV have spliced into the ongoing narrative of the Supeheavy arc in this issue are mind bogglingly sublime. At times it almost feels as if we’ve sidestepped into the Martrix, with all the fragments all jostling for our attention, before two clear junctures in Bruce’s life slowly begin to run parallel to one another… Alfred is now all that stands in the way of Bruce Wayne rediscovering the knowledge of who he really is in Batman #49, unfolding at Wayne Tower and Wayne Manor as time itself simultaneously becomes a portal to save the future and the last barrier to lock away the past. Its heartrending stuff, the scenes between Bruce and Alfred are truly moving, but with the machinery that will restore Bruce’s mind in such a dire state of disrepair, the key to Bruce’s resurrection rests with what is perhaps the most unexpected – yet ironically obvious – act of trust and foresight of all.

With Greg Capullo busy getting ahead with Batman #50, Yanick Paquette (Wolverine, Batman, Swamp Thing, Wonder Woman) and colorist Nathan Fairbairn (Batman INC, Multiversity, Wonder Woman: The Trial of Diana Prince) take over the artistic duties for Batman #49, and what an awesome looking issue it is! I really like how Yanick Paquette alternates the more futuristic scenes with those in the present day, with the multiple projections of Bruce’s lineage often coalescing like temporal thought bubbles, and the uncanny symmetry between the dual entrances into the cave are both magnificently epic and ominously foreboding.

Yanick Paquette brings this gloriously mined seam of craziness that Scott Snyder’s and James Tynion IV have created to life with such vivid detail, the sheer power of the emotional scenes will take your breath away, while the stunning rendering of Bruce’s struggle across fracturing realities unfolds over numerous two-page spreads that will simply blow you away with the sheer scope and scale of it all. Batman #49 also features some of the very best Nathan Fairbairn colors you can possibly imagine, Nathan Fairbairn makes every scene come alive in exquisite detail, utilizing a rich pallet of colors that complement the story perfectly.

The final moments are heartbreaking in the extreme. Although we all knew this moment was coming, now that we are finally here, the reality of Bruce’s struggle, along with the sacrifice he’s prepared to make, are really hammered home. This is no mere sci-fi cliché resolution either. Scott Snyder has kept us guessing every step of the way with the Superhavy arc, we’ve had a glimpse of the man Bruce might’ve been if he’d never set foot in crime alley as a child, but now the time has come to pull the trigger on that new found life and happiness, and the way in which this point is finally reached is guaranteed to break everyone’s heart.

Batman #49 is a superb issue from Scott Snyder and James Tynion VI. It’s one that mixes truths and consequences, where raw emotion and devotion cascade towards the memorial waterfall of a time immemorial, until we reach the threshold of the one line that even the Batman cannot cross… The haunting cover by Yanick Paquette and Nathan Fairbairn is like a Bat version of The Scream with a side order of Nosferatu to send a chill down your spine, lets hope they do a poster or print of this stunning cover one day, its brilliant, and there’s also a terrific Neal Adams variant cover to look out for as well. Batman #49 is a fantastic instalment of the Superhavy arc; everything is now set up for the momentous 50th issue. Hell yeah, its time to go to work!