Jim Gordon’s new role as Gotham’s nano-carbon-suited Dark Knight continues in Batman #42, as the city recovers from the traumatic events of Endgame. Gordon now faces the challenges of life as Gotham’s robotic law enforcer, and more surprises await as the all-new Batman hits the streets of Gotham City…

Batman #42 mixes duelling action figures, Gordon’s new perspective of Gotham as Batman, and plenty of high-octane app driven action as Scott Snyder’s and Greg Capullo’s exciting new story-arc kicks into high gear. Its fascinating to see Jim Gordon’s viewpoint of Batman’s world, his “old person” translation of the tech and tactics continues to raise many a wry smile, but the former Marine and Police Commissioner has really stepped up following Batman’s demise in Endgame to become a corporate funded Batman, one that works inside the system in conjunction with the GCPD and the local governments for the people of Gotham.

Superheavy Part 2 continues to drive the narrative by flashing forward and backwards as events unfold. The city is still licking its wounds after the chaos inflicted by the Joker. Jim begins to find his new life as an “official” Batman to be far more complex than he first thought, Powers Corp and the GCPD are the one’s calling the shots, and as a result there are certain lines that Jim won’t be able to cross like his predecessor. 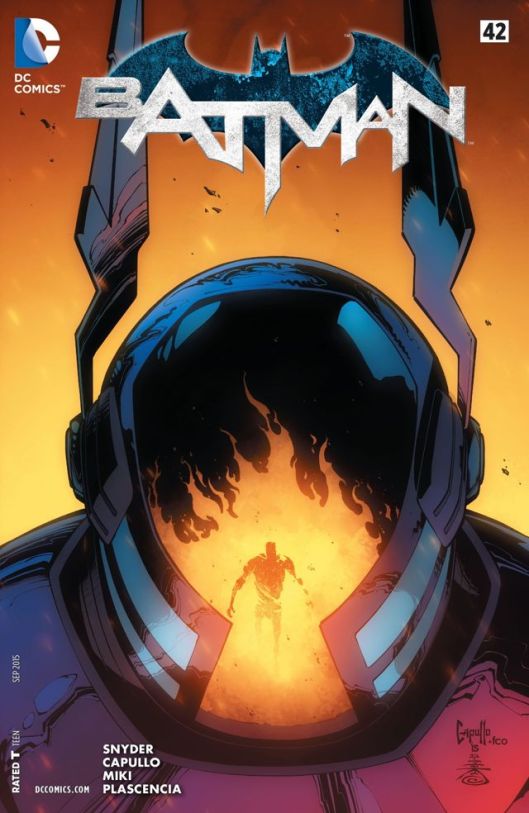 Batman makes a grim discovery at the morgue after Precious Precious mysteriously dies – poisoned by a high-tech radioactive implant. It would seem there have been other victims too, with implants that also gave them enhanced abilities, and the connection between their deaths provides an unsettling mystery for Gordon to mull over. Jim also attempts to hone his Batarang skills in this issue, his bond with Julia and Daryl continues to develop, and a new Batmobile debuts as another super-powered menace goes on the rampage in the Narrows.

I really like how Snyder is gradually developing this new story-arc. Gordon is striving to become the Batman he wholeheartedly believes Gotham needs, but Jim knows he’s got a lot to prove before the city will have faith in him – especially in the downtrodden communities of the Narrows. This new Batman isn’t all just about the high-tech Bat-Bot either. Jim has his own streamlined Bat-Suit for when he has to get out of the robotic-suit and work in the field as Batman, its a clever move by Snyder, and really creates an interesting spin on the new format. There’s a classic nod to the past as well; with a particularly apt use for some digital camouflage.

One notable difference I’ve found with this arc is the level of humour Scott Snyder has weaved into the narrative. It’s cleverly done, never overstated, and strikes a good balances between the wit and the big action set-pieces. The kids squabbling with the action figures and Commissioner Sawyer’s quip about the Bat-Bot being on charge are both priceless, while Gordon’s “superpower” and added incentive for giving up smoking are also nice touches, but it’s the running gag about Gordon’s Batman not having a Batmobile that really steals the show. 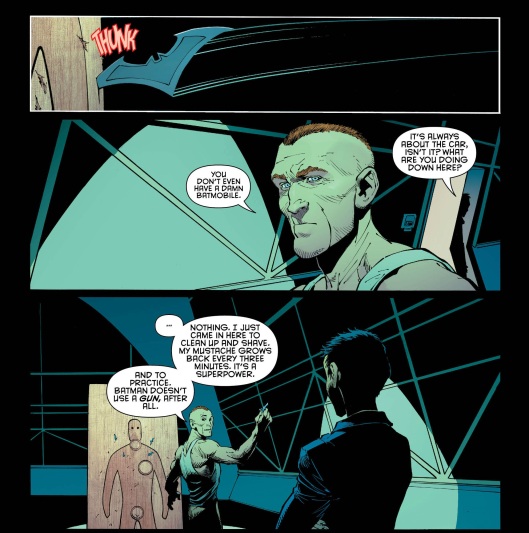 Greg Capullo’s art raises the bar once more for this series, the page layouts convey the pace and tone of the plot perfectly, and the sheer attention to detail in Batman #42 is stunning. The new Bat-Suit is really beginning to grow on me now, its got so many cool abilities, and Capullo is clearly relishing every opportunity he gets to show the suit in action. None more so than here, as the Bat-Bot goes toe to toe with a Triad leader with the ability to use the very bricks and mortar of Gotham itself against Batman. The sleek black Batman Bat-Suit that Gordon wears for his EVA’s from the Robo-Bat-Suit is also superb, and I love the classic hints of yellow trim on Gordon’s suit – especially the Bat-Symbol! As ever, Danny Miki’s sublime inks and FCO’s mesmerising colors fuse seamlessly with Capullo’s art to make Batman #42 another tremendous, almost cinematic experience. Batman’s fight with Gee Gee Heung is a ground shaking smack down, the scenes in the morgue are dark and brooding, and the new Batmobile / Bat-Van is a high-tech juggernaut that packs one hell of a punch!

Batman #42 is an action-packed issue that also sets up a wealth of plot threads for the rest of this arc. It would seem “Officer Batman” has found his first super-villain. While the mysterious Mr Bloom remains an enigma for now, there is a notable scene between Gordon and one of his colleagues as they reach a new bat-understanding, and last issues jaw-dropping ending is taken a step further too – with some very surprising results!

I think I’ve overcome my initial reservations about the bunny-eared Bat-Bot’s design and Gordon taking over as Batman. Seeing Jim Gordon experiencing Gotham from Batman’s perspective feels like a breath of fresh air for the title, if anything it actually brings us closer to Gordon’s character than we’ve ever been before. Batman #42 continues to build on the foundations of this new story-arc. Sure, the tone and style is very different from Snyder’s previous Batman storylines, but quintessentially it’s still Batman at its core, and if this issue is anything to go by Gordon and the legacy of the Bat are still very much as inseparable as ever…