Now that Zero Year is over, and events in Batman: Eternal have caused major upheaval in Gotham City, Batman #34 finds the Dark Knight faced with task of tracking down a mysterious killer who has been secretly haunting the streets of Gotham for many years. Now with the GCPD turned against him and Jim Gordon in jail Batman must work quickly to solve the mystery behind these heinous crimes before the killer can strike again…

Following the thrilling conclusion of Zero Year, Batman #34 sees the series move forward in time to coincide directly with the events and continuity that will follow the conclusion of DC’s current weekly series, Batman Eternal. Batman #34 is a stand-alone story, written by Scott Snyder and co written by Gerry Duggan (Who is also writing this October’s new series Batman Arkham Manor), is a spooky detective mystery, one that offers an unsettling insight into the mind of a killers deranged psyche, with art by Matteo Scalera.

When a patient from Leslie Thompkins medical clinic goes missing, Batman suspects that a killer is operating in Leslie’s neighbourhood. Batman #34 reintroduces us to a Gotham City still in turmoil following the events of Batman Eternal: the GCPD are no longer his allies, Selina Kyle is now a Kingpin, and Jim Gordon is locked up in Blackgate for murder. Now it seems a killer has been at work in Gotham and Batman didn’t notice. Furious with himself, Batman resolves to find this murder who has, until now, managed to evade the Dark Knight’s sight. 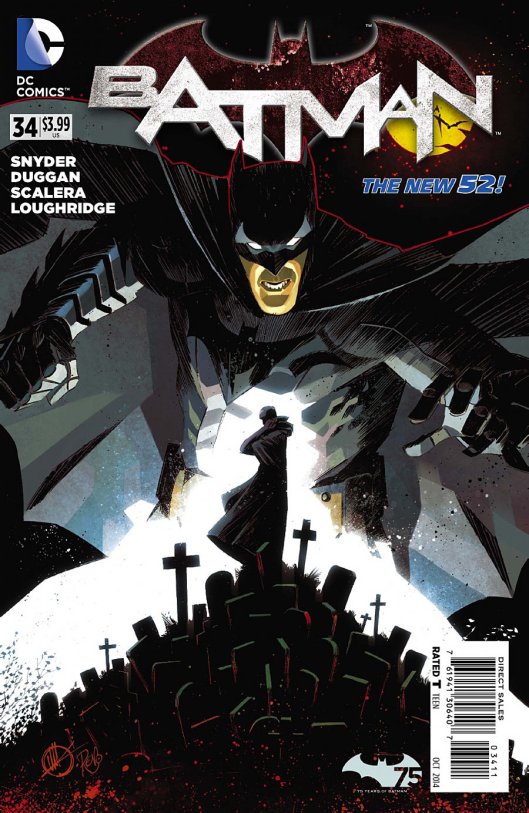 The Meek is dark and disturbing tale, one that simultaneously brings us bang up to date with current events in Gotham City while also providing a seamless transition from Snyder’s and Capullo’s 12 issue re-imagining of the Dark Knight’s origin in Zero Year. With its excellent story by Scott Snyder and co-written by Gerry Duggan, Batman #34 sees the Dark Knight working in a Gotham where the status quo has now been drastically altered. While so much has changed for Batman its good to see him working with his old friend, Leslie Thompkins, the medical practitioner who runs a clinic for the neglected and impoverished, during his investigation.

One of the aspects I really liked about this issue was the unsettling way it actually gets under the skin of the killer himself. This average guy, a person no one would notice, whose everyday life is as entombed within the realm of darkness, death, and despair as the poor and impoverished lost souls that he preys on at night. He’s one sick, twisted individual, someone who just happens to have slipped between the cracks, an opportunist nobody ever sees, his crimes blending into the dark underbelly of Gotham City, unnoticed even by the Dark Knight himself.

Matteo Scalera (Deadpool, Black Science) provides the art for Batman #34, capturing the dark and foreboding atmosphere of this tale with a series of dynamic page layouts that really pull you into events as they unfold. Scalera’s rendition of the Dark Knight’s world is perfectly suited to the tone of this story: from the cavernous shadows of the Batcave, to the headstones of Potters Field with Gotham’s skyline looming ominously in the distance, the concisely delivered recap of Batman Eternal forms a sublime collage of interconnecting images as Batman swings over the city, and the finale offers a chilling descent into the full horror of the killers design. The subdued grey and brown tones employed by colorist Lee Loughridge serves to enhance this issues dark atmosphere even further, creating a grainy mix of light and shadow that makes Batman’s search for the killer seem even more intense.

The issue concludes with a razor sharp double edged coda. While the Meek is effectively dealt with, the full extent of his depraved appetite and the dark legacy which it ultimately unearths is enough to render even Batman speechless. By the time you reach this stunning final page by Matteo Scalera and Lee Loughridge, the full impact of this issues story really hits home, and it’s an image that’s sure to send a few chills down your spine.

Batman #34 is a great self-contained issue, Snyder, Duggan, Scalera, and Loughbridge have crafted a deliciously dark and macabre story, and it certainly delivers plenty of shocks and surprises. Next we have a glimpse five years into the future, with September’s special tie in issue Batman: Futures End #1, before we return for the start of Snyder’s and Capullo’s next major Batman story arc, Endgame, that begins in October’s Batman #35, Endgame, is also set in during the same continuity established in Batman #34, and will subsequently take place directly after the conclusion of Batman Eternal.

Batman Endgame is Scott Snyder’s and Greg Capullo’s big event story for Batman’s 75th anniversary, featuring a large cast of characters and major events in store for the Dark Knight, together with back-up stories linking into the main story arc of Endgame, co written by Scott Snyder and James Tynion IV, with artists changing monthly, Batman Endgame promises to be Snyder’s and Capullo’s most epic storyline to date.