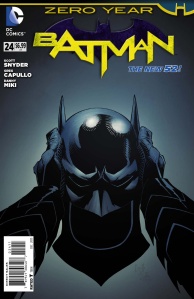 Batman #24 marks the moment where Bruce Wayne finally becomes the Batman, donning the cape and cowl for the first time in his war against crime, in this incredible double-double sized issue. Scott Snyder and Greg Capullo’s new take on the Dark Knight’s origin continues to reach new levels of brilliance as the fourth chapter of Zero Year unfolds, with Batman hunting down the Red Hood Gang and their mysterious leader. Secret origins are revealed as major events alter the course of Zero Year and Batman’s life forever…

Bruce Wayne has taken to the streets as the Batman to track down the members of the Red Hood Gang, who have been stealing chemicals and materials from various locations across Gotham City. As the Red Hood’s reign of terror builds towards its endgame, following Alfred’s advice Bruce goes to Philip Kane and asks him for information about the Red Hood Gang. Bruce is shocked to learn members of the gang branded his uncle with his Red Hood designation number, after they learned he’d tried to contact the Police. 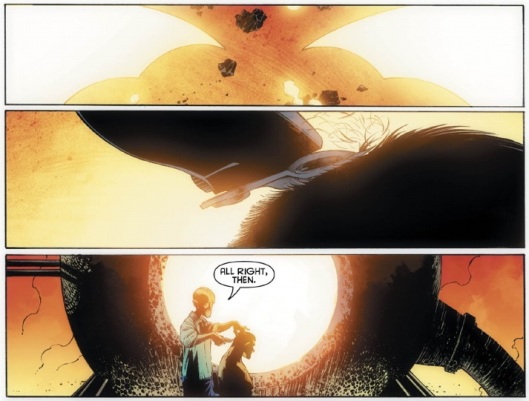 Back at the cave Bruce uses the key Philip gave him to access the tracking hub, it seems the Red Hood Gang have been targeting nearly every Wayne Depot, except for one, ACE Chemicals. Bruce decides to make a statement to the press outside ACE Chemicals, where he speaks of his hopes and aspirations for the future of Gotham, before revealing how the Red Hood Gang tried to kill him and are planning to poison the city with a deadly toxin they are manufacturing in ACE Chemicals.

The news report catches the attention of Commissioner Loeb, who sends one of his officers to investigate, Jim Gordon. At the scene, Gordon watches in horror as The Red Hood Gang launch RPG’s at the press conference. In the confusion Bruce manages to slip inside the building, where he is caught by the Red Hood. The Red Hood reveals how he intends to unleash the toxin the following day – the fifteenth anniversary of the murder of Bruce’s parents.

Alfred has been monitoring the situation from a van outside, he causes a power blackout, which helps give Bruce the opportunity to change into Batman. As the gang are left reeling from Batman’s attack, Gordon and his men burst into the building. Tragedy strikes for Bruce as the Red Hood makes for the roof. Evading Gordon and his men, Batman catches up with the Red Hood before he can escape and they plummet into the burning chemical plant to face each other one last time… 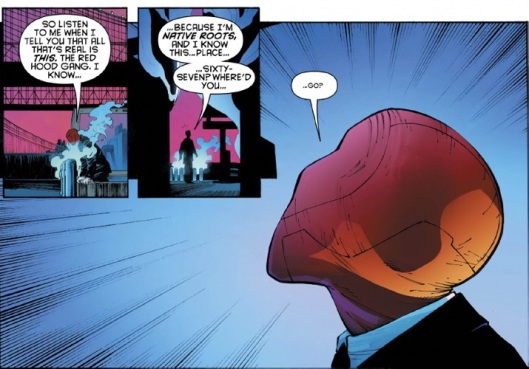 Its been a long wait, but from the moment you eagerly turn those first few pages of Batman #24 it becomes apparent that Scott Snyder and Greg Capullo have put their heart and soul into this issue. Dark City Part One not only gives us the first chance to see Batman in action in Zero Year, it also sees the culmination of the Red Hood’s plans, which lead to an explosive showdown in ACE Chemicals. Then of course we have the new design for Batman’s first suit, a sublime homage to Bob Kane’s original, a fusion of traditional styling with modern militaristic embellishments, snazzy gloves, and a sharper, more angular looking cape and cowl.

The suit is superb, the glimpse of a Batmobile covered by a sheet leaves your nerves tingling, the cave is being slowly equipped and assessed for expansion, and even Bruce’s close-cropped haircut shows how Snyder and Capullo’s new approach to the Bat-Mythology offers a clear insight into what Bruce Wayne’s journey to becoming Batman would be like today. As Zero Year is set six years ago, in terms of The New 52 continuity, this issue successfully reinvents itself though its present-day setting while reaming true to its time honoured past.

There are some really great nods to the past and the future in Batman #24, all effortlessly weaved into the plot by Scott Snyder. Members of the Red Hood Gang have already grown to fear Batman, speaking of him in hushed whispers, and comparing him with urban legends of witches and “Owls”. Alfred’s quip about Bruce not installing fire poles to access the cave, is a fun tip of the hat to the Batman TV series staring Adam West and Burt Ward, were Batman and Robin used to slide down the poles – inexplicably changing costume along the way – to get to the Batcave. Over at GCPD Bruce’s appearance on the news leads to a remark from the Commissioner about Harvey “Dent”, and we also see Gordon examining a board covered in pictures and clues pertaining to the Red Hood Gang and Batman. The explosive finale brings Gordon’s first encounter with Batman, yet another defining moment for Zero Year and the characters, where Batman saves Jim from a falling beam. 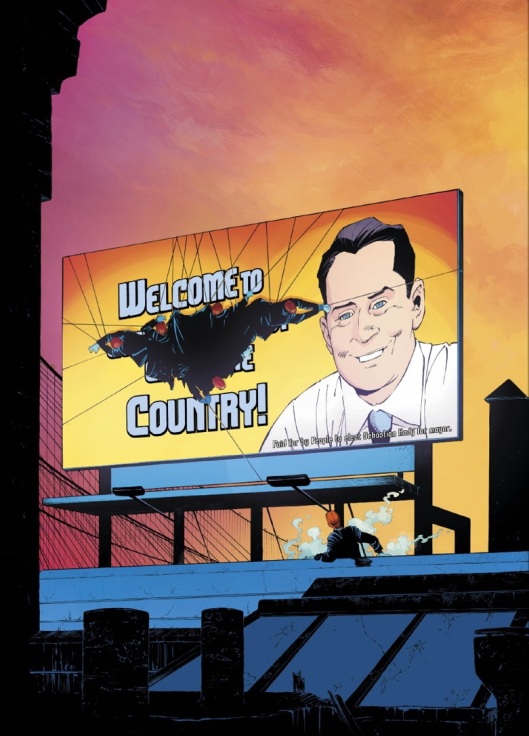 There are also some excellent character moments between Bruce and Alfred, with Pennyworth offering guidance as and when needed, as well as providing vital backup when Batman is inside ACE Chemicals. Bruce’s meeting with Philip Kane sheds new light on the Red Hood Gangs activities. They reconcile their differences, and although Bruce uncle’s motives may have been misguided, his attempt to redeem himself comes at a price.

The art by Greg Capullo and Danny Miki for Batman #24 is simply phenomenal, everything from the towering skyline of Gotham to the vastness of newly-equipped Bat cave and intricate detail of Bruce’s first bat-suit, Batman #24 looks amazing. The blackout Alfred instigates is beautifully accomplished by Capullo, a shadowy take on the bat-signal that rightly deserves its full page, and the sprawling network of gantries inside ACE Chemicals which lead up to the final confrontation between Batman and the Red Hood provide the ultimate payoff for Scott Snyder’s inspired approach to Batman’s origin.

Special mention must also go to the incredible colors by FCO Plascencia, which infuse this fourth chapter of Zero Year with an almost cinematic quality, serving up moody twilight skies as Batman stalks the Red Hood Gang across the rooftops, and making scenes between Bruce and Alfred in the cave feel epic as any blockbuster as FCO’s exquisite tones enhance the subterranean expanse that Bruce is rapidly transforming into his new base of operations.

As well as a superb cover by Greg Capullo, featuring our first glimpse of Batman’s cowl, Batman #24 also has a variant cover by Guillem March. This cover features the Red Hood plummeting towards a bubbling vat of green chemicals, with Batman’s image reflected in the red helmet as he reaches out to save him. Ever since the Joker’s origin story first appeared Detective Comics #168 in 1951, written by Bill Finger, “The Man Behind the Red Hood” has remained an integral part of the Clown Prince of Crime’s early years. Guillem March’s variant cover captures this iconic moment perfectly, indeed, as soon as it became clear the Red Hood would be a major player in Zero Year, speculation has been rife about whether the character would indeed become the Joker at some point. 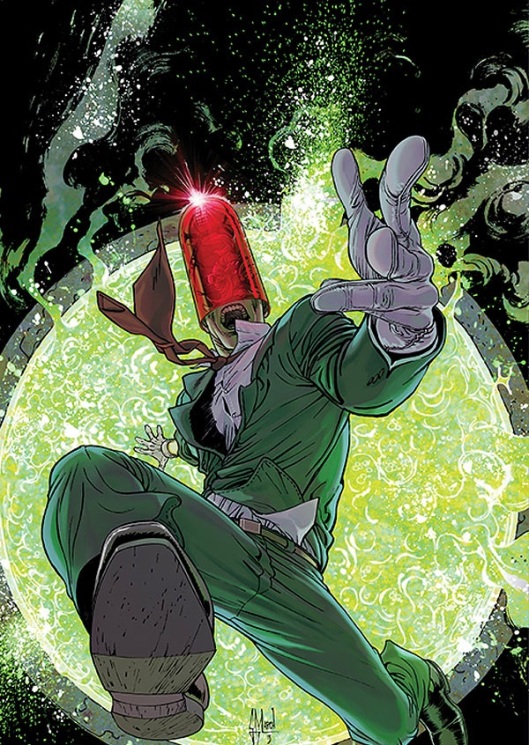 So, the burning question is, does Batman #24 see the Red Hood’s identity stripped away, his flesh seared white and his hair turned green after his fall into vat of chemicals, emerging with a maniacal grin on his face? Well, not exactly, lets just say that  iconic scene above the vat of chemicals does play out up to a point, but with a surprising twist that will leave you wondering long after you‘ve finished reading this issue.

The coda for Batman #24, written Scott Snyder and James Tynion, with art by Rafael Albuquerque, where Alfred and Bruce discover some rather interesting facts about the Red Hood, casting yet more mystery and intrigue over his true identity.  The Riddler also makes a return, providing us a glimpse of his new costume. Finally we get a  taste of what the next segment of Zero Year may hold as Nygma broadcasts a message, unleashing a riddle that plunges Gotham into darkness.

The early chapters of Zero Year saw how the young Bruce Wayne struggled to rid Gotham of the Red Hood Gang, before finally embracing his destiny to become the Batman. The Bruce Wayne of Zero Year, newly returned  from his travels around the world to complete his training, has been portrayed as a much less disciplined character, prone to angry outbursts, and more than a little overconfident in his own abilities. Its been fascinating to see him slowly finding his way throughout these early chapters of Zero Year, with Alfred playing a crucial role in keeping him grounded. His fighting style as Batman is a little rougher around the edges to what we‘re used to, but what Bruce lacks in finesse he more thank makes up for with his youthful aggression and intimidating presence. The scene where he takes out the members of the Red Hood Gang, tying each one to a sign to form a bat symbol, is brilliantly staged as Batman swoops from the shadows..

Zero Year has enabled Snyder and Capullo to draw on many of the iconic moments from Batman’s past, offering a different perspective just as Miller’s Year One did in the 80’s and Christopher Nolan’s more recent Batman trilogy based the character in a more grounded reality. Although the setting are indeed similar, Snyder’s modernisation of Batman’s origin helps bring an entirely new and more relevant slant on the villains and gangs that Batman would now be facing in current times. 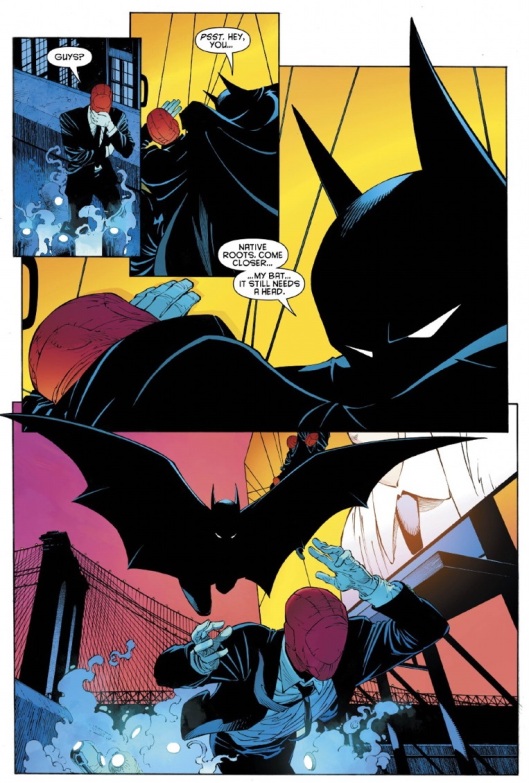 Batman #24 is a fantastic issue, loaded with stylish action, as well as some surprising twists, the fourth part of Zero Year delivers on every level. Just as the Nolan films rebooted the movie franchise, and with Fox developing a new Gotham TV series about Jim Gordon’s early years in the city’s police department, it is perhaps fitting that Zero Year is also readdressing Batman’s origins at this time. The legacy of the Dark Knight is continually evolving, offering writers and filmmakers the chance to expand on what has gone before, allowing us to revisit these character time and again, generation after generation.

Whether you agree that Batman’s early years needed retelling or not, Batman #24 is arguably a well measured attempt to update the story, insomuch that Snyder and Capullo have remained entirely faithful to the character – crafting a seamless fusion of past and present with a decidedly modern twist. Batman #24 not only manages to live up to the hype, it exceeds all expectations, and is a worthy addition to the legacy of the Dark Knight.