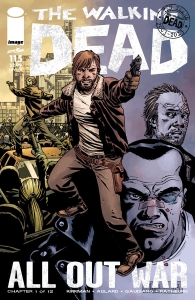 The Walking Dead #115 is the beginning of the 12 part All Out War story arc to celebrate the 10th Anniversary of  Robert Kirkman and Charlie Adlard’s epic comic book series. This monster event will tear through the lives of everyone as All Out War breaks out in The Walking Dead #115, the first chapter of a storyline that will see Rick Grimes and his group of survivors fighting for their lives in a conflict involving all factions of the Walking Dead universe: The Saviors, The Hilltop, and The Kingdom.

With the help of Jesus and Ezekiel’s troops, Negan and the Saviors were driven out of Alexandria. Now the battle lines have been drawn, sides have been chosen, the Kingdom and the Hilltop communities are united with Rick’s fellow survivors. Together they prepare to go to war with the Saviors and bring Negan’s reign of terror to an end… 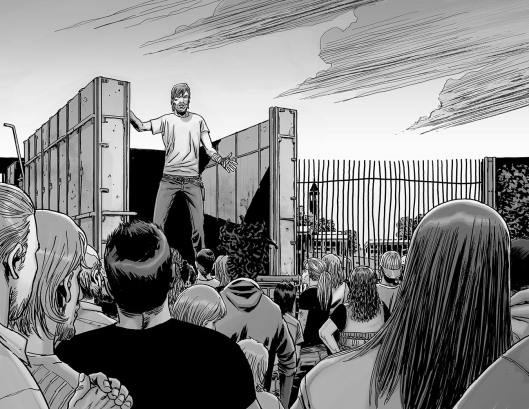 The Walking Dead #115 beings with moments of quiet reflection as Rick wakes early, the responsibility of the war he is about to start weighing heavily on his mind. Andrea reassures Rick that he has made the right choice, and that no matter what it takes to win this war, she knows the outcome will be worth it. Meanwhile, Ezekiel and Michonne have spent the night together, although neither are willing to commit to anything just yet. Whether anything will come of their relationship remains to be seen, however, Michonne does believe their time together may have the potential to “mean” something more eventually.

With everyone working flat out to prepare for the attack on the Saviors, Rick, Jesus, and Ezekiel get ready to move out, but before they leave Rick stands up and addresses everyone. Rick knows that everybody has put their lives on the line by supporting him in his fight against Negan, he thanks them all before they set out, saying how he believes the dark path they are about to take will lead them to a better place in the end.

Andrea, who is still recovering after fighting one of Negan’s men in the Bell Tower, is staying in Alexandria with Carl. Before he goes, Rick entrusts Carl with more responsibility, seeing as he did so well at organising the people on the wall after Rick’s failed attempt to kill the Saviors Leader backfired and left them easy targets for Negan’s snipers. Rick and the others board the trucks and drive to the Saviors base, where Rick issues his demands as Negan looks on. Rick offers Negan a chance to surrender peacefully or face the consequence, but Negan has a very different plan, and a surprise of his own waiting for them.

All Out War gets under way as Rick and his new allies embark on their mission to deal with Negan once and for all. The Walking Dead #115 opens with a brooding sense of anticipation, as Robert Kirkman shows us how Rick manages to face up to his own doubts and rally his forces in the build up to the confrontation with Negan. Kirkman includes some great scenes between Rick and Andrea, and there is a nice moment between Rick and Carl before he leaves for the battle.

We also discover that Ezekiel stayed over at Michonne’s, not that surprising really, as the chemistry between them has bee simmering ever since they first met. Its going to be interesting to see how their relationship develops over the course of All Out War, and I expect if they are going to live together, then Ezekiel’s pet tiger, Shiva, is going to have to be housetrained!

Negan is as vile as ever, delivering a foul mouthed diatribe at Rick from his vantage point above the Zombie infested barricade of the Saviors base, yes we do get to see some Zombies this issue as well! Of course no one seriously expects that Negan will give in to Rick’s demands, even though he is faced with the combined might of the hilltop communities, Negan has got a counter proposal that manages to keep him one step ahead of his enemies. 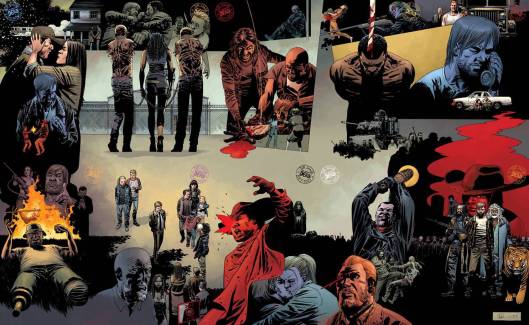 Charlie Adlard’s art on The Walking Dead is as excellent as ever, there are some great full page scenes crowded with characters, and the attention to detail is quite remarkable given how much the cast has grown recently. As The Walking Dead is now going bi-weekly during Al Out War, Adlard is assisted by Stefano Gaudiano’s inks, which  brings an added depth to the grey tones.

Along with the standard cover, The Walking Dead #115 has been released with a series of 10 individual connecting covers, each marked B-K, while cover O was a special NY Comic-Con- exclusive  that was only available at the show. Each cover draws on the major events over the last ten years of The Walking Dead comic series, and collectively they certainly get these 10th anniversary celebrations of to an impressive start.

The Walking Dead #115 if a confident opening to All Out War. The Battle is about to begin, all the major players are in position, and if the closing moments of this issue are anything to go by, the carnage is about to be epic.