Legacy of the Daleks

As the Doctor begins searching for his missing companion, Sam, a psychic cry of despair from his granddaughter Susan leads him to Earth in the late 22nd century where England is gradually recovering from the Dalek invasion. This is where the Doctor left Susan after she fell in love with David and stayed to help the survivors rebuild. However, when the Doctor arrives in Domain London he finds that Susan has gone missing and the city is now divided by political infighting.

The Doctor’s attempts to find Susan leads to a confrontation with Lord Haldoran, who is planning all-out-war against his enemies. Haldoran’s military advisor, Estro, has installed power cables down an abandoned mineshaft, where they are attempting to reactivate a mysterious device. When the Doctor meets Estro he instantly recognizes him as the Master. However, this is the incarnation who regularly battled against the 3rd Doctor, and he has been manipulating events so can he seize control of a powerful Dalek weapon. 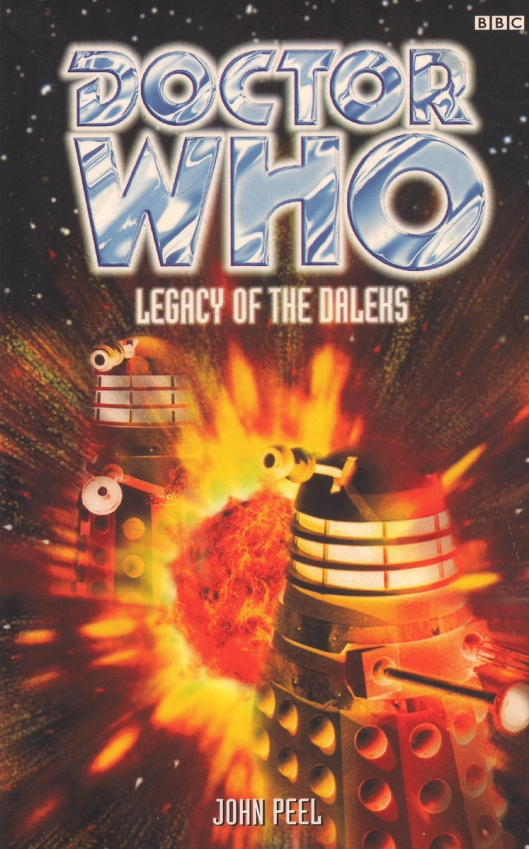 But have the Daleks really been vanquished, or are they secretly rebuilding? The Doctor is reunited with Susan, and together with her husband David, and Donna, a knight of Domain London, they must find a way to stop the Master from escaping with the core of the matter transmuter and destroy the Daleks.

Legacy of the Daleks is set thirty years after the Dalek Invasion of Earth, where humanity is gradually starting to rebuild, but the shortage of natural resources has begun to cause conflict as opposing political factions begin to turn on one another. Although the Doctor’s companion Sam dose not appear in Legacy of the Daleks, this offers John Peel the chance to reunite the Doctor with his granddaughter Susanhe, as well as her husband David, and introduce us to Donna, one of the Knights of Domain London.

One of the most interesting aspects of Legacy of the Daleks is way Peel develops these characters, these are harsh times, and it seem that Susan and David’s relationship is in trouble. David is struggling to cope with the fact Susan is not aging like him, because she is a Time Lord, and it’s beginning to put a strain on their marriage. Donna is another really strong character, she is the black sheep of her family, and has had to overcome great adversity in her own personal life. Haldoran is a maliciously evil character; his plot to overthrow his rivals is utterly ruthless.

The Eighth Doctor is right in the thick of the action in Legacy of the Daleks. It was interesting to see the Doctor reunited with Susan, and the added bonus of having the Delgado version of the Master included as well brought a nice twist to the story. It takes a while for the Daleks to appear, but when they do the plot becomes really action packed as the Daleks go on the rampage. After such an exciting story, the ending did seem a little rushed and a bit contrived for my liking, but it was still a thoroughly entertaining book.

9 thoughts on “Legacy of the Daleks Review”