Everything stops for tea in Batman #98 as the Dark Knight’s world reels from the chaos of Joker War. Joker has taken everything from Batman, his wealth, his arsenal of vehicles, and now Batman is more vulnerable than ever thanks to a massive overdose of Punchline’s new Joker Toxin. As the Dark Knight wrestles with haunting visions and darkness Harley Quinn must watch over him while he recovers, but Punchline is on her way, and she’s hell bent on killing the Dark Knight!

Writer James Tynion IV continues to weave his magic on DC Comics flagship Batman title with yet another spellbinding, emotional, and action-packed issue. Batman #98 crams so much into this fourth instalment of Joke War its difficult to surmise just how richly crafted and well put together it all is. Tynion has Batman tripping the light fantastic for much of the issue — thanks to a brew cooked up by Harley Quinn in her floral underground hideout to cleanse Punchline’s souped up Joker toxin from his system — and the Dark Knight’s ensuing hallucinogenic tea break with the dearly departed Alfred is both deeply moving and highly insightful. Alfred serves up a unique perspective on the twisted dynamic of the Batman’s and Joker’s eternal conflict. Tynion’s powerful script also manages to salvage a plausible outcome to the devastating fallout caused by Tom King’s idiotically deconstructive run on Batman, essentially turning lead into gold, and making Alfred’s senseless death and Bruce’s inability to face up to that loss seem all the more poignant and credible as a result. 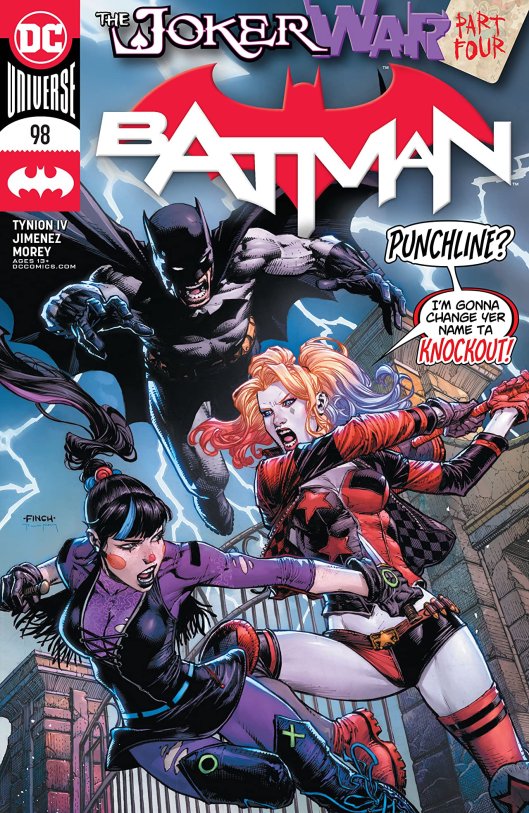 Ding! Ding! Seconds out… because the rest of the issue, as you’ve probably guessed by the cover, is indeed taken up by the face-off between Harley-Quinn and Joker’s new partner, Punchline. If, like me, their first clash left you feeling a bit underwhelmed then you will be pleased to know their showdown in Batman #98 is a real kick-ass fight that finally showcases both characters to their full potential. Tynion ensures the dialogue is as razor sharp as their combat, we also get to understand more about what motivates Punchline, and how she ingratiated herself with the Joker.

This issue features some truly fabulous artwork by Joege Jimenez’s as well. Stylish, overlapping page layouts capture the tone and pace of the story perfectly. Every scene focusing on Bruce’s conversation with the imaginary version of Alfred is beautiful crafted, with characters expressions conveying warmth, depth and unparalleled honesty. Punchline’s fight with Harley Quinn is — by stark contrast — a like ballet of exquisite violence and hate, with no quarter given and none taken. Jimenez’s art is enriched further by the striking tones and hues of colorist Tomeu Morey which makes Bruce’s hallucinogenic state and the stunning backdrop of Harley’s underground hideaway seem to almost leap from the page. Even the brief interludes with Catwoman as she recuperates at Penguin’s secret refuge along with the rest of the Gotham rogues to wait out Joker War are finely realised by Jimenez’s and Morey.

While this issue doesn’t redact Alfred’s death, it does go a long way to finally making Alfred’s loss feel less senseless than is once did. Finally this issues iconic “I’m Batman” scene is no-doubt the punch-the-air moment that we’ve all been waiting for since Joker War began, and its great to see Bruce putting his old friends advice — imaginary or otherwise — to good use without at moments hesitation.

Batman #98 is another terrific issue from the dynamic creative team of Tynion IV, Jimenez and Morey. They have revitalised the Dark Knight’s world with strong characterisation and striking visuals. Now with the penultimate chapter of Joker War and the landmark Batman #100 on the horizon this series continues to impress on every level, and I for one can’t wait to see how everything turns out.