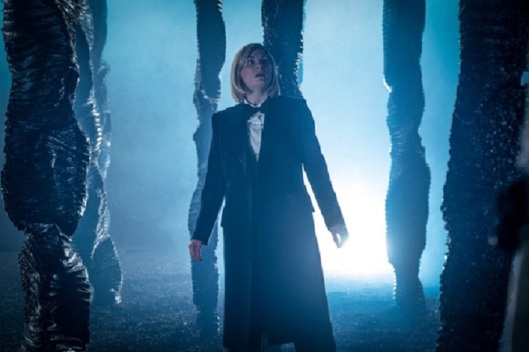 Following the epic cliffhanging season premier Series 12 of Doctor Who continues with Spyfall Part 2, where a terrifying plot to destroy humanity is about to be unleashed! The Master (Sacha Dhawan) has returned, and he’s more dangerous than ever! In the second half of this sci-fi spy thriller, written by Showrunner Chris Chibnall and Directed by Lee Haven Jones, the Doctor (Jodie Whittaker) and her friends must escape a plethora of deadly traps in their mission to foil the insidious alliance now threatening the universe.

Spyfall Part 2 certainly has quite an act to follow as it left us wondering how on earth the 13th Doctor and her “fam” of companions Ryan (Tosin Coyle), Yaz (Mandip Gill) and Graham (Bradley Walsh) could possibly escape their combined plight – with the Time Lord spirited away to a strange otherworldly realm and her friends about to face certain death on a plane rigged to crash by the Master! Yet that’s exactly what they do as Jodie Whittaker’s ever resourceful incarnation of the Doctor and her team bounce back to take on the fiendish alliance endangering multiple dimensions in their race against time to save humanity from the Master‘s diabolical scheme. 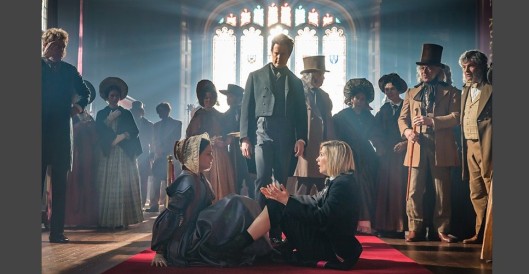 But escaping the unknown dimension of the Kasaavin and the plummeting aeroplane are just the start of the TARDIS team’s adventures. So, as Ryan, Yaz and Graham to land the plane in Essex (thanks to some Blink style prearranged help from the Doctor) and set off to figure out Daniel Barton’s (Lenny Henry) plans, the Master pursues the Doctor across time, first to an exhibition in 1834, and then to German occupied Paris in 1943. Jodie Whittaker gives one of her best performances so far as the Doctor in this episode, and she seems totally sure of herself in the role of the Time Lord now. Its also fun to see Tosin Coyle get to save his friends by piloting the plane, Mandip Gill sadly still feel a bit like a third wheel as Yaz, and Bradley Walsh hilariously steals everyone’s thunder when he puts some nifty 007 gadgets to good use!

This episode also features a strong guest cast who play the three key historical figures that team-up with the Doctor, with Aurora Marion as Women‘s Auxiliary Air Force, SOE agent and wireless operator Noor Inyat, Mark Dexter as mathematician, philosopher, inventor, and engineer Charles Babbage, and Sylvie Briggs as mathematician and writer Ada Lovelace. Chibnall keeps the Doctor separated from her companions for much of the episode, this actually works to Spyfall’s advantage to further expand the scope of the story, and it’s also interesting to see the 13th Doctor working alone and alongside these three historical characters as well.

In having the Master return Chris Chibnall has pulled something of a masterstroke – no pun intended – by launching this new series of Doctor Who with such a brilliant surprise that nobody saw coming. This latest incarnation of the renegade Time Lord is played by Sacha Dhawan (An Adventure in Space and Time, Sherlock, Iron Fist), and he brings a real sense of maniacal glee to the role. Of course last time we saw the renegade as Missy (Michelle Gomez) in 2017’s The Doctor Falls she’d apparently perished while confronting her former self, played by John Simm, so Sacha Dhawan’s latest incarnation heralds a new era for the Doctor’s greatest adversary. The beauty is that we never actually saw Missy regenerate, so the origins of Dhawan’s Master still remains full of intriguing possibilities that have yet to be fully explored.

The Master’s alliance with the Kasaavin, the shimmering aliens with the uncanny ability phase through matter and technology company CEO Daniel Barton (Lenny Henry) is finally revealed during this episode. The Kasaavin are cosmic spies that move through time collecting data, together with Barton their aim is to reformat humanity‘s DNA into biological hard drives, but it seems the Master has been playing them both off against each other simply to orchestrate a trap for the Doctor. The Master dominates much of the action when it comes to this trio of threats in Spyfall. Sacha Dhawan’s incarnation of the Master furiously chases the Doctor through time once she escapes the Kasaavin‘s dimension with Ada Lovelace, he gets very trigger happy with his favourite weapon, the Tissue Compression Eliminator, at times too, and there’s a number of riveting face-offs with the Doctor that become increasingly dangerous and unpredictable as the episode unfolds. 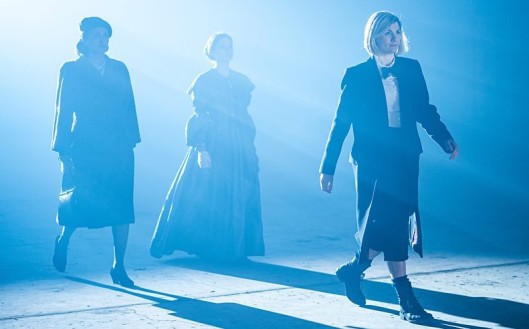 The resolution of the Kasaavin’s involvement in Spyfall Part 2 is handled quite well, although we still don’t get to know that much about these mysterious creatures apart from their name or scant details about the bizarre dimension they inhabit. Lenny Henry is ok as company CEO Daniel Barton, but his character seems a little sidelined, especially towards the end of the episode. Ironically it’s the Master’s own TARDIS (still disguised as O’s house from the Australian outback) that’s instrumental in getting the Doctor back to the present day UK in time to turn the tables on the Master and reunite with her friends.

It’s also no surprise that the Master’s double crossing ways see the Kasaavin turn against him and imprison him in their domain. The brief scenes which see the returning of Noor Inyat and Ada Lovelace to their proper place in time also provides good codas to their part in the story, and they each have some nice parting moments with the Doctor. 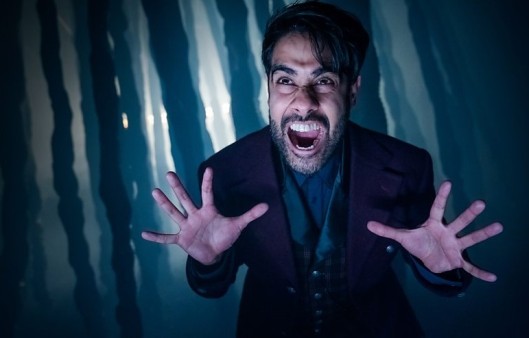 After the glitzy action-packed Series 12 premier things take a much darker turn in this second episode, the tone and visuals are far more atmospheric, and that’s thanks to the impressive direction from The Bay’s Lee Haven Jones who stylishly embellishes every ounce of drama from Chibnalll’s engagingly paced script. Despite cramming a plot bursting with action, time travel, along with the Doctor battling Nazis, a technological menace, together with an alien invasion across multiple dimensions and timelines, Spyfall Part 2 cleverly splices its complexities with a strong character driven narrative to deliver a highly satisfying adventure. If all that wasn’t enough there’s also wealth of Doctor Who themed Easter Eggs in this episode for fans to enjoy, both new, and classic old school Doctor Who as well – my favourite being the “contact” telepathic conference between the 13th Doctor and the Master, something which we first saw the Doctor do when the 3rd Doctor (Jon Pertwee) teamed up with his previous incarnations in The Three Doctors (1972/73).

There are also hints of a wider story arc bubbling away under the surface as Spyfall draws to a close, especially when the Doctor returns to Gallifrey following the Master’s cryptic remark about their homeworld to her in Paris at the Eiffel Tower, only to find it in ruins. The Master’s holographic message in the Doctor’s TARDIS potentially calls into question everything that he and the Doctor knows and stands for. But what could the Time Lords of Gallifrey have done that could have possibly horrified the Master so much that he’d unleash such carnage on his homeworld, and who or what is the significance of The Timeless Child (first mentioned in 2018’s The Ghost Monument) that is now clearly part of the main story arc Chibnall is setting up for the rest of the season? 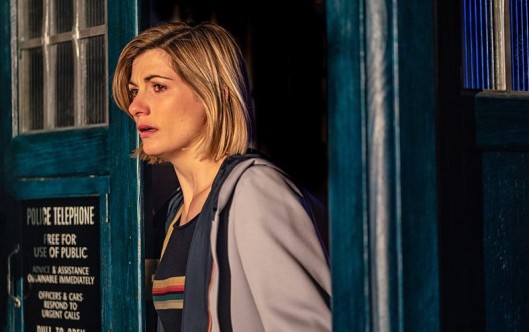 Spyfall Part 2 provided an ambitious and exciting conclusion to this opening two-parter. It was an excellent episode, the confrontations between the Doctor and the Master were brilliant, and the ending set up major plot elements for the rest of Series 12. Most notably though, before the credits roll the Doctor does find she has some explaining to do, seeing as her companions point out how she hasn’t been that forthcoming until now about her past or previous selves, but her companions unwavering faith in her reinforces the bond between them as the Time Lord humbly brings her team up to speed and they rally to her side to face the new adventures ahead.