Having caught up with Lightray to safeguard Highfather of the New Gods last issue, and with Orion’s life still hanging in the balance back at the Green Lantern Corps HQ on the sentient world of Mogo, the race is now on for Hal Jordan to prevent the Nth Metal Golems from destroying Highfather.

As with the previous issue in this story-arc, the pace hardly lets up for a moment, and writer Robert Venditti keeps the action and suspense building as the emerald jet fighter Hal’s constructed carries him and Highfather across space at unimaginable speed – pursued by a Golem’s lethal Omega Beams. Meanwhile, on Mogo, Kyle Rayner must muster every ounce of his willpower to maintain the artificial heart needed to support Orion – after Orion’s real heart was removed to trick the Metal Golem hunting him into believing that he was dead – while Corp’s leader John Stewart strives to discover the destination of the Golem’s new objective. 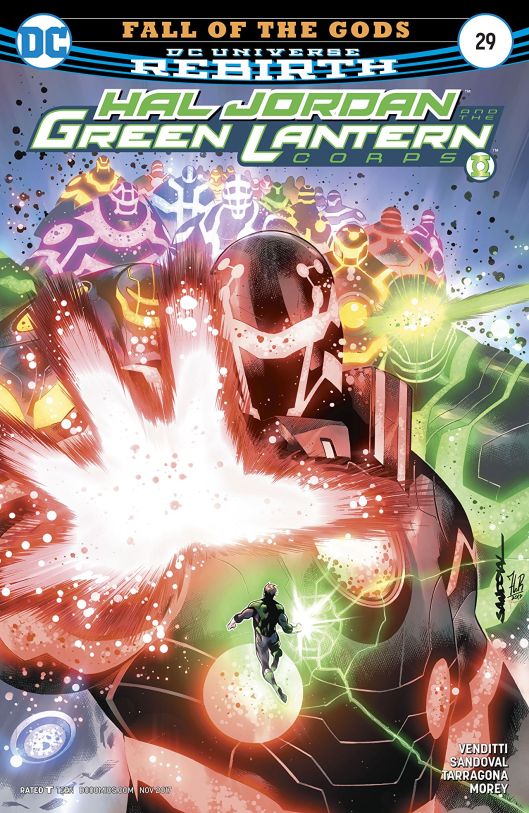 I’ve only been reading Hal Jordan and the Green Lantern Corps since issue #17, primarily because that issue featured a major turning point for Kyle Rayner (my favourite Green Lantern) in a story which saw him transformed from the White Lantern back to being a Green Lantern again. The Prism of Time and Fracture story-arcs which followed then got me totally hooked on the entire Green Lantern Corps again, and I’ve enjoyed catching up with the lives of Hal Jordan, John Stewart, Kyle Rayner, Guy Gardner, and many more characters besides.

Even though this issue is the final part of a big storyline, this title is still relatively easy for new readers to jump on board and get swept along with the action. Much like the Omega Beams stalking Hal and Highfather, this issue moves at lightening speed, and there’s no time for breakfast either as the Green Lantern Corps rally their forces to prevent the Metal Golems releasing Yugr-Khan from a mysterious cosmic barrier – The Source Wall!

Needless to say, the artwork by Rafael Sandoval and inks by Jordie Tarragona relays the frenetic action superbly, realizing the finer nuances of Robert Venditti’s script and dazzling the eye with bold, sweeping page layouts. Impressive vistas of the Source Wall and stunning scenes of the Green lantern Corps flying into battle with the Golems, all gloriously accentuated by colorist Tomeu Morey’s striking use of tone and shade, all serve to make this one of the most visually arresting issue so far, and it more than hit’s the sweet spot for delving all-out-action on such a grand scale.

Hal Jordan and the Green Lantern Corps #29 provides a rousing conclusion to The Fall of the Gods arc. The threat poised by the Golems and their plan to free Highfather’s father, Yugr-Khan from the Source Wall is resolved in a fittingly blockbusting, and satisfying manner, with an especially poignant scene for Hal and Highfather afterwards which resonates powerfully with the underlying themes of fatherhood that have bought added gravatis to this cosmic epic. In short, if, like me, you like your comics packed with more Green Lanterns than you can shake a power battery at, boasting wall-to-wall action, together with strong characterization, plotting, and fun camaraderie, then Hal Jordan and the Green Lantern Corps is the book you for you!