Land of the Blind begins in Daredevil #26, when a message from an absent friend sends Daredevil on a mission to the other side of the world to rural China. The Man Without Fear must not only contend with the challenges of his new environment, he must also face a new villain, someone that even Daredevil’s extraordinary hyper-senses can’t detect…

This new story-arc from writer Charles Soule, artist Ron Garney, and color artist Matt Milla kicks off in fine style as Daredevil acrobatically leaps across the rooftops of Manhattan. Having won a landmark case that will finally allow heroes testimonies to be used in court, Matt is now back in his traditional red Daredevil costume, and riding high after the Supreme Court ruled in his favour. So, with Hell’s Kitchen unusually quiet as the ramifications of this news begins to sink into the criminal community, Daredevil switches his attention towards those in Chinatown seeking the help of his former protégée Sam Chung – Blindspot. 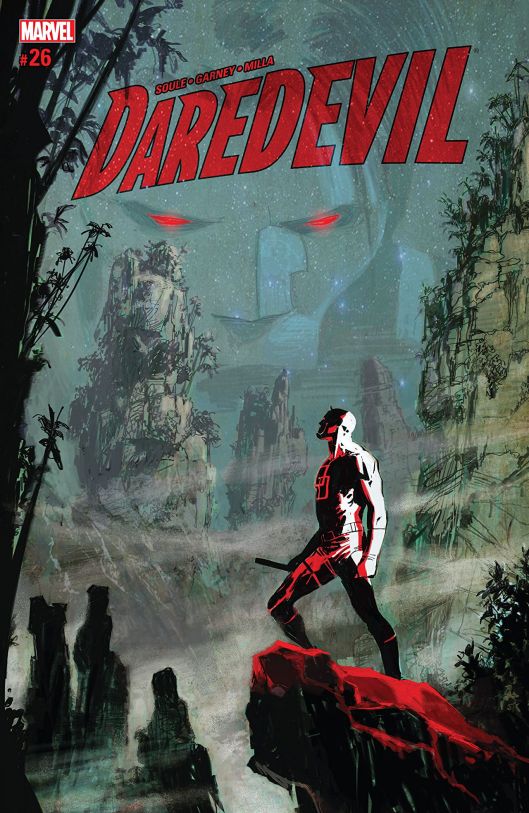 Blindspot was one of the defining characters of this new volume of Daredevil during its early stages. Sam Chung had built a suit that enabled him to turn invisible, he became Blindspot, and Daredevil chose to mentor him. Together they took down the gangster known as Tenfingers and saved Sam’s mother. Blindspot continued working with Daredevil until he was horrifically blinded (during The Dark Art storyline) by an Inhuman serial killer called Muse. After leaving hospital, Sam disappeared, and Daredevil hasn’t heard from his since.

As Daredevil brings the latest batch of messages for Blindspot to his sister in Daredevil #26, Charles Soule scripts some extremely powerful and emotional scenes as Sam’s sibling struggles to comes to terms with the choices her brother made, and Daredevil’s reasons for continuing to bring her the envelopes left for Blindspot in Chinatown. But not all of them are calls for help; one holds an invitation for Daredevil to go to China, where a fateful encounter with a deadly new enemy waits!

Ron Garney’s artwork stylishly envelops you in this broodingly atmospheric tale right from the outset: from the moody opening scenes in Chinatown, to the interlude at the DA’s Office, and enlisting Foggy’s help, Murdock’s journey to China is vividly detailed and culminates with a jaw-dropping vista of rural China as Daredevil goes in search of a hidden temple. Color artist Matt Milla employs a sumptuous blend of cool shades, rich shadows, and earthy tones over the course of this issue to great effect. Much as I really liked the darker costume Daredevil has worn in this series, its great to see him back in his red costume again, I think it’s a good move, and it makes the character look even more dramatic when seen in such a rural setting like this.

This issue builds to an ominous cliff-hanger as Daredevil finds himself face to face with some old enemies, but not even Matt’s enhanced senses are a match for the new foe waiting in the wings… From the moment you set eyes on that haunting cover Ron Garney you instantly know you are in for something truly special with this issue. Daredevil #26 begins another great chapter in this series, Charles Soule, Ron Garney, and Matt Milla deliver a sublime mix of powerful characterization, intriguing mystery, and eerily staged action sequences to make this issue of Daredevil a thoroughly enjoyable and suspenseful read from cover to cover.