Doctor Who World Enough and Time

A close friendship for the Doctor will become the catalyst for his most impetuous decisions of all time… In her bid to change her evil ways, Missy has joined the Doctor, Bill, and Nardole on their adventures in the TARDIS. When they become trapped on a gigantic spaceship caught in the gravity of a black hole, the Doctor faces the demise of someone he’s sworn to protect. But on this ship of uncanny life forms, where even time is working against him, old enemies await – the Mondasian Cybermen and the Master!

The inexorable path to the end of an era begins in the penultimate episode of series ten, World Enough and Time, the first part of the series finale, written by show runner Steven Moffat, and directed by Rachael Talalay (The director of the two-part 2014 series finale Dark Water and Death in Heaven, along with 2015’s Heaven Sent and the series nine finale Hell Bent. As the title for World Enough and Time suggests, it’s a reference to a poem by Andrew Marvel, entitled To His Coy Mistress, the lines of which resonate strongly with Missy’s role and the Vault story-arc that has been so prevalent across the entirety of series ten.

Kicking off with a startling pre-titles sequence as the Doctor emerges from the TARDIS into a frozen snowscape where he begins to regenerate, World Enough and Time is an episode that hit’s some powerful emotional beats right from the outset, and from there Steven Moffat’s taut script doesn’t let up the pace for a moment. In deciding to give Missy the chance to explore her newfound goodness as part of her rehabilitation, the Doctor lets her take the lead in a mission to save a 400 mile long colony spaceship attempting to reverse away from a black hole. Yes, there’s a new Doctor, In-The-TARDIS… well, sort of, as Missy glibly assumes the role of “Doctor Who”, along with Bill and Nardole acting as her trusty “disposables” while the Doctor observes from inside the TARDIS.

However, when the blue-skinned humaniod Jorj arrives and holds them at gunpoint the Doctor soon has to intervene. The ship is on full reverse, but because of the time dilation caused by the close proximity of the black hole, time is moving at significantly faster rate at the top of the vast colony ship than at the bottom. Fearing the beings about to arrive in the lift, Jorj shoots Bill when she admits to being human, fatally wounding her. Sinister humanoids dressed in hospital gowns then emerge from the lift and take Bill’s body away despite the Doctor’s protestations.

It is from this shocking moment, as we linger for what seems an eternity on the gaping wound in Bill’s chest, that World Enough and Time spirals momentarily into flashback mode to bring us up to speed with the events that have brought us to this point. There are some wonderful scenes as the Doctor and Bill discuss his long-standing friendship with Missy / the Master, its all beautifully played by Capaldi and Mackie, and it makes what is to come feel all the more heartbreaking as a result.

With the Doctor’s telepathic message instructing her to wait for him haunting her from this moment on, Bill awakes in a strange hospital to find a mechanical device has been grafted to her chest – effectively replacing her heart. Befriended by one of the hospital workers, Mr Razor, Bill gradually settles into life at this end of the colony ship as the population prepares to be upgraded for Operation Exodus, meanwhile the Doctor begins to piece together what really happened to the bridge crew, and the implications of the time dilation for the Doctor and Bill quickly become frighteningly apparent as we observe events seemingly conspiring to keep them apart.

Soon, the TARDIS trio are thrown into total chaos, dark secretes and treachery will strike, there are patients crying out quite literally in “Pain” in a creepy hospital, and old enemies are gathering against the Doctor. Peter Capaldi is, as you’d expect, is on magnificent form throughout as the Doctor tackles the rapidly evolving plight they now face. Pearl Mackie also gives a wonderfully emotive performance in this episode as Bill faces some chilling horrors in the hospital, and Matt Lucas continues to impress as Nardole. The guest cast also includes a good performance by Oliver Lansley as Jori, along with Paul Bright well (Surgeon), and Alison Lintott (Nurse).

Michelle Gomez is quite simply fabulous in World Enough and Time as Missy, the female incarnation of the Doctor’s arch nemesis, The Master. The subplot concerning Missy’s incarceration in the Vault, along with her subsequent desire to renounce evil and make up for her wicked ways, finally delivers the ultimate payoff in this episode as we get to see just what the self-confessed Queen of Evil is really capable of.

The World Enough and Time also marks the return of the Cybermen, and this time it’s the 1960’s style Mondasian Cybermen that Peter Capaldi’s 12th Doctor finds himself face-to-face with, and this iconic fan-favourite monster with its distinct low-tech cloth-faced look has been faithfully recreated in a the most remarkable way possible for their return here in the modern series. Superbly voiced by Nicholas Briggs, their unsettling form of speech – established with a very creepy rationale – together with their imposing presence ensures that this wonderfully dark and sinisterly toned episode will have you on the edge of your seat as a plethora of macabre and unsettling incidents unfold – especially with the episodes grim exploration of Cyber-Conversion

The Mondasian Cybermen first appeared in the 1966 story The Tenth Planet, staring William Hartnell as the 1st Doctor, it was written by Kit Pedler and Gerry Davis, and directed by Derek Martinus. Although for much of World Enough and Time we are actually only presented with their frightening intermediate stage, as seen en mass in the spaceships vast hospital wards, when an original Mondasian Cybermen does finally emerge from the shadows to face the 12th Doctor and Nardole in this episode the splicing of fan-expectation and nostalgia it generates is stunning. 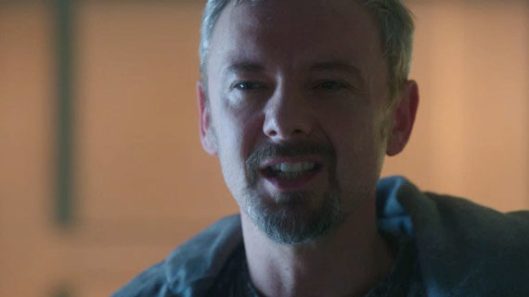 Once the lift brining Doctor, Missy, and Nardole eventually arrives at the bottom level of the ship, the Doctor and Nardole head off to find Bill while Missy is entrusted with finding out about the origins of the colony ship – which she soon discovers is from an Earth-like world; Mondas! Approached by Mr Razor, Missy is shocked when he peels away his disguise and is revealed to be her own previous incarnation – The Master!

Yes, its not just the Mondasian Cybermen who are back, John Simm also returns in World Enough and Time as the earlier version of The Master, last seen in the 10th Doctor’s 2010 swansong, The End of Time Part 2, and his brief presence really brings an electrifying sense of frisson and drama to this episode as events gradually begin to spiral out of control for the Doctor. Sporting greyer hair and a neatly trimmed goatee, John Simm ensures his portrayal of the Master is just as villainously evil and menacing as ever, and the scene stealing moment where the Master and Missy unite against the Doctor is brilliantly played by Simm and Gomez, and its made all the more shattering once the Doctor realizes the Mondasian Cyberman he’s found is Bill when it tells him that it waited for him. This has to be one of Doctor Who’s most powerful cliff-hangers ever. However, it is a great shame that John Simm’s return as the Master wasn’t kept secret though, as the build up to this big event is really good and it would’ve made one hell of a surprise when coupled with the horror of Bill‘s tragic fate.

While not as loaded with Cybermen references as I might’ve expected, World Enough and Time does hint to some other key points from the programmes past. Missy’s insistence on calling herself “Doctor Who” during her fleeting role as the Doctor in this episode is an interesting word-play on the Doctor’s actual name, which often tends to be used in this manner more like a question, like in The War Machines (1966) when WOTAN, the computer in the Post Office Tower, demanded: “Doctor Who is required.” John Simm is back as the Master, as is the renegade Time Lord’s penchant for disguises, something Roger Delgado’s Master often employed in his schemes following his debut in Terror of the Autons (1971) to outwit UNIT and the 3rd Doctor (Jon Pertwee), most memorable of which was probably adopting the identity of Reverend Mr Magister in The Daemons. When the Master returned in the 80’s played by Anthony Ainley other disguises included the elderly Portreeve in 1981’s Castrovalva and the wizard-like Kalid in Time Flight, and in 2007’s The Sound of Drums and Last of the Time Lords the John Simm incarnation of The Master took on the persona of the newly elected Prime Minister – Harold Saxon. In another clear link back to the 3rd Doctor’s era Peter Capaldi’s Doctor also uses some Venusian Aikido in World Enough and Time to deal with Jorj.

Even though Missy and Bill take centre stage over the Doctor for a time, Peter Capaldi still gets some incredibly dramatic scenes, there are some timey-wimey shenanigans as well, but Moffat doesn’t trowel it on so thick that it overloads the plot, and of course the return of Jon Simm as the Master is the icing on the cake in this brooding horror-tinged episode. Impressive in scope and atmospherically directed by Rachel Talalay, the sight of Bill fully converted into a Mondasian Cybermen and flanked by Missy and the Master as they confront the Doctor, is as gut wrenchingly emotional as it is exciting, and Moffat and Talalay prove once again what a winning team they make in World Enough and Time when is comes to these two-part extravaganzas. With its opening hints towards the 12th Doctor impending regeneration and its Genesis of the Cybermen premise, World Enough and Time is one of the darkest and most sinister episodes of this series, and the thrilling cliff-hanger masterfully sets everything up for what promises to be a truly epic series finale!

8 thoughts on “Doctor Who World Enough and Time Review”