Doctor Who The Lie of the Land 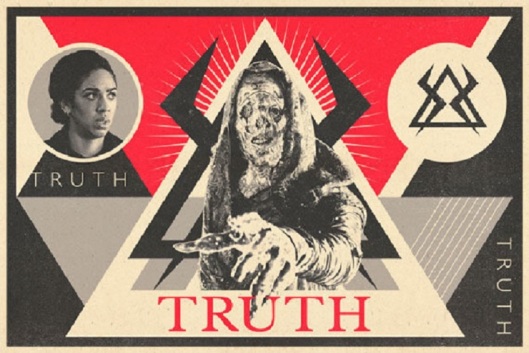 The entire world is in thrall to a collective delusion and only Bill Potts’ can see through this mass lie to the truth. With even the Doctor choosing the wrong side, it falls to Bill to persuade the Time Lord that the whole human race is in danger, because if she can’t convince the Doctor, Bill might have to kill her best friend to save humanity.

The eighth episode of series ten, The Lie of the Land, marks the Doctor Who debut of Director Wayne Yip, his previous credits include Secret Diary of a Callgirl, Utopia and Misfits, as well as episodes 6 & 7 of the BBC Three Doctor Who spin-off series Class. The Lie of the Land is written by Toby Whitehouse, his seventh script for Doctor Who, along with School Reunion (2006), The Vampires of Venice (2010), The God Complex (2011), A Town Called Mercy (2012), and most recently 2015’s Under the Lake / Before the Flood.

As the final chapter of the Monk Trilogy, The Lie of the Land presents us with a drastically altered present-day Earth following the aftermath of Bill’s “executive decision” in The Pyramid at the End of the World. Earth has been invaded by the Monks, history has been rewritten, and the Doctor is now seemingly on their side – as the Time Lord’s constant broadcasts of fake news would seem to attest. Unbelievers who do not accept the Monks as their world’s benefactors are imprisoned. However, the Monks have been on Earth for only six months, not millions of years as they’ve led humanity to believe. Only Bill can see through the global deception, with Nardole’s help – now recovered after his exposure to the chemical biohazard at Agrofuel Research Operations – she must rally the resistance against the Monks regime, but when Missy’s knowledge of the Monks is needed to help the Doctor, Bill, and Nardole to save the world their mission soon becomes even more dangerous.

Toby Whitehouse’s intense script plunges the world into a warped dystopian nightmare unlike anything we’ve quite seen before. From the chilling prologue, the Monks uncompromising rule is frighteningly reinforced by the Doctor’s rather creepy behaviour. Peter Capaldi excels in every scene, brining a dual edge to the role of the Time Lord, and giving arguably one of his strongest performances so far this season. Pearl Mackie also gives a sensitive and engaging performance as Bill Potts, who must now face the harsh agonies of this darkly reinvented world that she’s ultimately responsible for, and at times its affected her so much Bill’s even started to talking to her late mother (played by Rose Jane) to prevent her from loosing her mind. Nardole once more provides some much needed comic relief to dispel the gloom, Matt Lucas gets some great lines, and his characters key role here highlights what an integral part this TARDIS trio he has become.

Bill and Nardole finally manage to track the Doctor to a prison ship off the coast of Scotland, but to their horror it seems that he has really swapped sides and joined the Monks. This in turn forces Bill to make one of the most difficult decisions of all, and it’s a truly heart-in-the-mouth moment as Bill steps up to the plate and shoots the Doctor! From this shocking turn of events an early regeneration appears to be on the cards, but when the Time Lord’s sudden regeneration quickly stops, it becomes clear the situation on the ship is an elaborate ruse by the Doctor, Nardole, and the soldiers of the resistance to make certain Bill is free of the Monks influence. In order to learn more about the Monks though, the Doctor and Bill must return to the university to seek help from a certain Time Lady who knows a thing or two about how the Monks manage to subjugate entire worlds.

Michelle Gomez returns in The Lie of the Land as Missy, the female incarnation of the Doctor’s arc nemesis; The Master. This episode finally takes us inside the Vault where Missy has been incarcerated. It would appear Missy is going “cold turkey” from evil, but she still delights in revealing that to break the Monks psychic grip on the world they must find whoever opened the door for the Monks and kill them, which obviously isn’t good news for Bill! Just as in Extremis, Michelle Gomez turns in a slightly subdued performance that completely wrong foots our expectations about Missy. Her appearances bring added gravatis to the episode, together with a moving insight that once again shows her character in a somewhat different light, but has the Queen of Evil really changed her ways or is Missy simply playing her wickedly evocative brand of villainy to a different tune?

Having played the Monk in the first two parts of this trilogy, Extremis and The Pyramid at the End of the World, Jamie Hill (The Foretold in 2014’s Mummy on the Orient Express and a Silence in series six) is back, this time as the Giant Monk for The Lie of the Land. After being given pure consent to take over the world by Bill in the previous episode – to save the Doctor and restore his sight – these cadaverous looking red-robed Monks have shaped the world to suit their own twisted Orwellian designs. Now they are part of the very fabric of humanities development, they’ve guided our history, the technological advances, and even protected us from alien invaders. Although the Monks don’t actually say or do that much in The Lie of the Land, we do see more of their energy powers as they defend the interior of their main pyramid, where the Giant Monk sits overseeing a giant central broadcasting chamber that maintains the psychic mass-delusion.

The Lie of the Land has distinct echoes of The Last of the Time Lords (2007) and Turn Left (2008) about it, both were episode which also depicted the Doctor’s companions (Martha and Donna respectively) taking a more central role in a another stark dystopia version of the world. The Doctor’s opening monologue about the Monks exploits in The Lie of The Land include glimpses of a Dalek from Into The Dalek (2014), a Cybermen in Nightmare In Silver (2013), and a Weeping Angel from Blink (2007), later we see scenes from the Pilot, and in the Monks cathedral we see other still images displayed from the current tenth series. The brand Magpie Electricals – originally introduced in 2006’s The Idiod Lantern – is also quite prominent in this episode. Missy plays some of Erik Satie’s Gnossienne No 1 on the piano and later some of Scot Joplin’s The Entertainer. Perhaps most notably, aside from a brief glimpse when Bill mentally battles against the Monks in the cathedral, the TARDIS doesn’t feature at all in The Lie of the Land, not something that often happens in modern Doctor Who – 2008’s Midnight is another fine example of a TARDIS-less episode from the programmes current era.

The episode builds to a rousing finale as the Doctor, Bill, Nardole, and the rebel commandos fight their way into the central chamber of the Monks main pyramid, where the Giant Monk resides over the psychic broadcast controlling the population via the signals emanating from the giant statues the Monks have strategically built around the world. When the Doctor’s attempt to link his mind to the Monks systems and override their control fails, Bill steps in, despite his protests, and prepares to sacrifice herself by taking his place to mind-link with the Monks. Bill’s memories of her mother being overriding the Monks broadcast, and it is this loving memory that ultimately awakens humanities hope and causes them to rise up against the Monks control. Defeated, the Monks abandon Earth, later the Doctor and Bill discovers everyone has forgotten about the Monks, and back in the Vault it would seem Missy is finally beginning to feel genuine remorse for all the people that she’s killed…

As well as providing us with a great new monster, The Monk trilogy has brought an intriguing change of pace to series ten, and skilfully dispelled any kind of mid-season lull. The leads all give exceptionally powerful central performances that make The Lie of the Land extremely compelling viewing at times. A great set up during the first half of the episode skilfully builds the tension and the plot gradually draws us into the heart of the Monks grand designs. Although the conclusion does fall back on some rather familiar tropes, it nevertheless provides a satisfying resolution to the trilogy overall. Toby Whitehouse’s intricately crafted script, together with the strong direction from Wayne Yip, ensures The Lie of the Land presents an extremely challenging adventure for the Doctor and his companions, and an exceptional finale to this thrilling mid-season trilogy.

Here’s the Next Time trailer for The Empress of Mars

Been looking forward to the return of the Ice Warriors!

10 thoughts on “Doctor Who The Lie of the Land Review”