Oxygen finds the Doctor, Bill, and Nardole responding to a distress call that leads them to a huge space station, Chasm Forge, on the far reaches of the galaxy. After becoming trapped on board they discover that the crew, except for the four remaining survivors, have all been brutally murdered. But the dead are still stalking the corridors! In this future where oxygen is a valuable commodity sold by the breath load, and space suites are worth more than their human occupants, the new TARDIS crew must confront the most nefarious of evils…

The fifth episode of series ten, Oxygen, marks the welcome return of writer Jamie Mathieson to the series with another exciting and scary adventure. Mathieson made his debut with his impressive script for 2014’s Mummy on the Orient Express, and he also wrote the highly innovative Fatline (2014), and most recently The Girl Who Died (2015). Also making their return to Doctor Who is Charles Palmer, the director of 2007’s Smith and Jones, The Shakespeare Code and the acclaimed two-parter Human Nature / The Family of Blood.

Kicking off with a nod to Star Trek’s iconic-voice over, Oxygen soon has the Doctor, Bill, and Nardole donning spacesuits after their arrival on Chasm Forge, a vast mining station in deep space overrun by a spacesuited army of the walking dead. The Doctor and his companions, along with the stations four surviving crewmembers, must fight for their lives as the undead horde closes in, but what has caused this terrifying outbreak to occur? Just like the pervious episode Knock Knock, Oxygen is another spookily atmospheric episode, although with Oxygen the horror is far more full-on and intense – especially where the space zombies are concerned.

The political, corporate, and capitalist undertones that permeate Oxygen’s stark vision of the future are equally as chilling realized as the hostile environment of space itself in this episode. Ironic computer statements punctuate the narrative with a satirically charged social commentary, it seems oxygen has become big business in the future, and here on Chasm Forge the very air that you breathe is one of the most valuable assets of all!

Oxygen makes space feel edgy and dangerous in again in Doctor Who as writer Jamie Mathieson jettisons the more familiar Sci-Fi tropes the series usually adopts for a decidedly more scientific and accurate portrayal of the harsh realities of space. A whole scene during one of the Doctor’s lectures at the university is given over to establishing some of these facts, which in turn gives added credence to the dangers encountered on Bill’s first proper adventure in outer space as events on board Chasm Forge begin to spiral out of control. The script also cleverly separates them from the TARDIS and puts the sonic screwdriver out of commission – so there’s not going to be any easy way out for the Doctor, Bill, and Nardole this time!

Peter Capaldi and Pearl Mackie make a terrific team as Time Lord and companion respectively, they get some really powerful and emotional scenes in this episode, and it’s good to finally see Matt Lucas taking a more active role alongside them in Oxygen as Nardole since his character has felt a little sidelined since The Pilot. This is also an extremely challenging episode for Bill, as the terrifying situations she faces on Chasm Forge test her – and her faith in the Doctor – to the limit, none more so perhaps than the heart-stopping horror of being exposed to the vacuum of space. Trapped on this space station where human life is weighed up against the value of a spacesuit and oxygen is credit highly prized above all else, even the Doctor encounters a crisis unlike anything he’s faced before when Bill’s spacesuit malfunctions and the Time Lord gives her his suits helmet to save her but the prolonged exposure to the vacuum affects his eyes and blinds him! 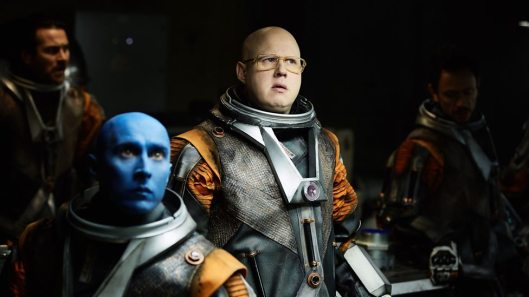 Oxygen features a good cast of supporting characters: with Justine Salinger as Tasker, Katie Brayben as Ellie, Mimi Ndiweni as Abby, Kieran Bew as Ivan, and Peter Caulfield as the blue-skinned Dahh-Ren. Although their character development is a little sparse, they prove sufficient to drive the narrative where necessary, and it is probably the wry Dahh-Ren who makes the biggest impression of all the surviving crewmembers.

Zombie-like monsters with a deadly electrified touch in Oxygen are also really impressive. Whether shambling along dark corridors or walking en masse across the hull of Chasm Forge, the make up effects for these bloated, decaying, lifeless-eyed creatures are quite a frightening sight to behold. This army of the walking dead has actually been created by their own spacesuits, which have deactivated their organic component, but most horribly of all they carry on working regardless because of the sophisticated programming running their suits. The Doctor later discovers this is a ruthless algorithm used by the company, the lives of the crew have become too inefficient, and its deemed more efficient by the mining company to have the dead cadavers working in the automated suits instead of the living so as to maximize the company’s profits.

There are a number of Who references to look out for in Oxygen, most notably the Fluid Link, which Nardole tries to uses to sabotage any further attempts by the Doctor to leave Earth again and neglect his oath to guard the Vault. The Fluid link was first mentioned in the 1963 episode, The Dead Planet, where the Doctor stated the link has gone wrong and the TARDIS couldn’t operate without a functioning fluid link which also requires Mercury to operate. This was actually a ruse by the Doctor (William Hartnell), the link wasn’t faulty, but it allowed him to convince his companions to go along with his wish to explore a strange alien city. But the planet they had landed on turned out to be Skaro, and soon the Doctor would encounter the Daleks for the first time in the programmes history. In a more recent connection to the series, we also get to see the picture of Bill’s mother again from Knock Knock which she glimpses in her minds eye as she begins to succumb to the vacuum of space. Incidentally, director Charles Palmer is also the son of Geoffrey Palmer who had roles in Doctor Who and The Silurians (1970), The Mustans (1972), and Voyage of the Dammned ( 2007).

Having been forced to abandon Bill to a fate that seemingly saw her become one of the space-suited zombies, the Doctor and the surviving crewmembers become trapped. At the last moment the Doctor revenge hacks the computer and links their suits to Chasm Forge’s systems, if they die, the station will explode, so killing them would be the more expensive option and the company’s profits will be wiped out. This ingeniously uses the company’s own warped corporate economics to their advantage, effectively turning the tables, and the zombies give their own oxygen supply over to the living survivors – including Bill who was only really stunned – to keep them alive and save the station.

Nardole later repairs the Doctor’s eyes and they return to the university. However, once Bill leaves the room, the Doctor suddenly has a grave secret to tell Nardole. It would seem Oxygen is going to be something of a life-changing experience for the Time Lord after all, because his vision hasn’t returned, he’s still blind!

With great performances all round, Oxygen is a taut, excitingly crafted adventure from writer Jamie Mathieson, the drama and peril the Doctor, Bill, and Nardole face in this story certainly puts this new TARDIS team through the wringer, and the outstanding direction of Charles Palmer keeps you on the edge of your seat as the action steadily progresses. All in all, Oxygen, with its scary zombies-in-space premise and impressive special effects, proves to be another thrilling addition to series ten, and the shock cliff-hanger concerning the Doctor’s sightless predicament sends everything spiralling off on an entirely new and unexpected tangent few could’ve predicted.

And here’s the ominous Next Time trailer for Extremis!

5 thoughts on “Doctor Who Oxygen Review”