An uncanny, mind-bending adventure awaits in All Star Batman #8 as the Dark Knight’s mission to save the world leads Batman into a fateful encounter with one of the most deranged members of his infamous Rogue’s Gallery… the Mad-Hatter!

Fittingly, this penultimate instalment of Ends of The Earth unites the all-star team of acclaimed writer Scott Snyder and artist Guiseppe Camuncoli to bring us the most intriguing and bizarre chapter in this saga so far. Batman’s quest to contain and neutralize the deadly spores Mr Freeze unleashed upon the world has already been partly successful, thanks to a cure provided by Poison Ivy, brining a temporary reprieve to the crisis, but the creeping death could begin spreading again at any moment. Now, with a team of camouflaged adversaries called the Blackhawks hampering Batman’s efforts and Duke suddenly MIA, the trail of clues has led him to a secluded house in the dank depths of the Batchaloo swamp where Batman must now confront the Mad-Hatter.

Ends of the Earth Part 3, like all of the issues in Scott Snyder’s latest All Star Batman story-arc, begins with Batman walking – quite literally – into the story; with a monologue-like introduction that gives us a tantalizing taste of what to expect from this issue as Batman emerges from the waters of the swamp. In essence while the narrative is more prose than comic book in many respects, these entrances have all felt like metaphors for the far wider scope of the overall story itself. Yet in other, more subtle ways, they also feel deeply personal and frank, non more so perhaps than with this issue, as Snyder writes from the very heart and soul of his being in a way that resonates as powerfully with the reader as it does with the characters on the page. 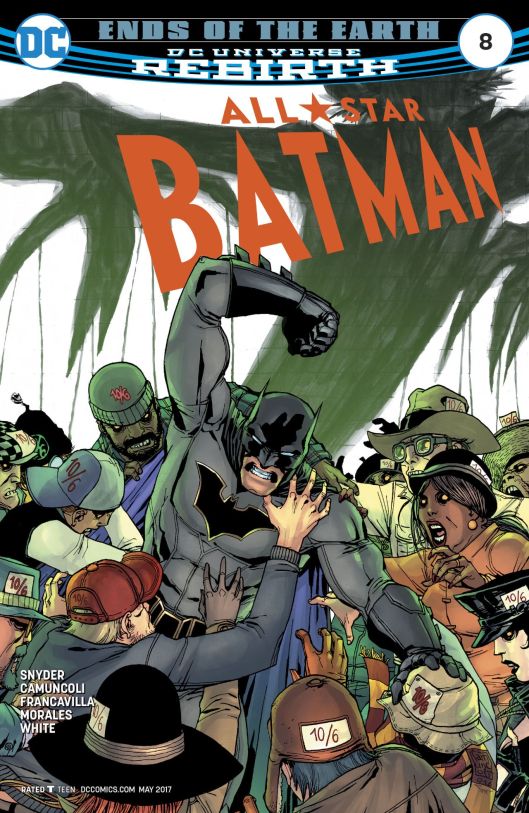 There are battles with some familiar faces and those not so familiar as well, but they are over before they are even instigated really. Batman doesn’t have time to hang about, the clock is ticking, the world is at stake, and nothing is going to make him late for this tea party! I’ll be honest with you, I’ve never rated the Mad-Hatter that highly, and in fact I’ve always considered him to be a decidedly second rate Bat-villain. However, Snyder does indeed work his magic – weaving in some intriguing connections from the past – to make the Mad-Hatter a truly dangerous and compellingly cunning adversary to be reckoned with in this issue.

All Star Batman #8 features some of this arcs most distinctive artwork yet, with Giuseppi Camuncoli’s pencils beautifully rendering the swampy locale, the initial fights are a joyous blend of instinct, strategy, gadgets, and wise fashion choices that prove Batman’s way never goes out of style. I can’t decide whether its Camuncoli’s depiction of the Mad-Hatter’s warped dreams for his inventions to send the world collectively though the looking glass or the terrifying plunge through the raw psyche of the Dark Knight’s grey matter that is the biggest highlight of the issue, but one thing’s for sure, with such gloriously atmospheric inks from Mark Morales and hauntingly psychedelic colors by Dean White, this issue is deliriously brilliant experience on every level.

The Cursed Wheel Part 7, continues the back up story written by Scott Snyder, and featuring stunning artwork by Francesco Francavilla. Although the focus for the majority of this storyline has been on Duke’s training, here we take a bit of time out for this beautifully crafted interlude – which also nicely links in with past events – as Duke finds inspiration in the most unlikely of places.

Our trip down the rabbet hole ends as All Star Batman #8 draws to a close in a fittingly explosive, and reality warping fashion. So, has this issue changed my mind about the Mad-Hatter? Well, yes, almost… While I don’t think the Mad-Hatter will ever be amongst my favourite villains from Batman‘s Rogues Gallery, this issue from Scott Snyder and Guiseppe Camuncoli has certainly altered my perceptions of the character. All Star Batman #8 is a wild, psychological, and chilling mind-trip though a Bat-themed Wonderland and it sets everything up for the thrilling conclusion of Ends of The Earth where the true villain will finally be revealed!

8 thoughts on “All Star Batman #8 Review”