The Dark Art concludes in Daredevil #14 as the Man Without Fear resolves to track down the murderous instillation artist Muse, who has left a gruesome trail of “artwork” across Hell‘s Kitchen. Now, Muse has captured Daredevil’s new protégé, Samuel Chung, A.K.A Blindspot. Matt Murdock’s skill and powers will be tested to the limit, but will it be enough to save his young friend from becoming Muse’s next work of art..?

The fifth and concluding part of The Dark Art from the outstanding creative team of writer Charles Soule, artist Ron Garney, and color artist Matt Milla, delivers a tense and unsettling finale to this exceptional story arc that doesn’t flinch from depicting the drama and graphic horror of Blindspot’s plight. Daredevil’s aguish is almost palpable from the outset as he meets the Inhuman Detective Frank McGee – who wants to arrest Muse for his crimes – at the scene where Blindspot went missing after rescuing Muse’s hostages from the sewers. 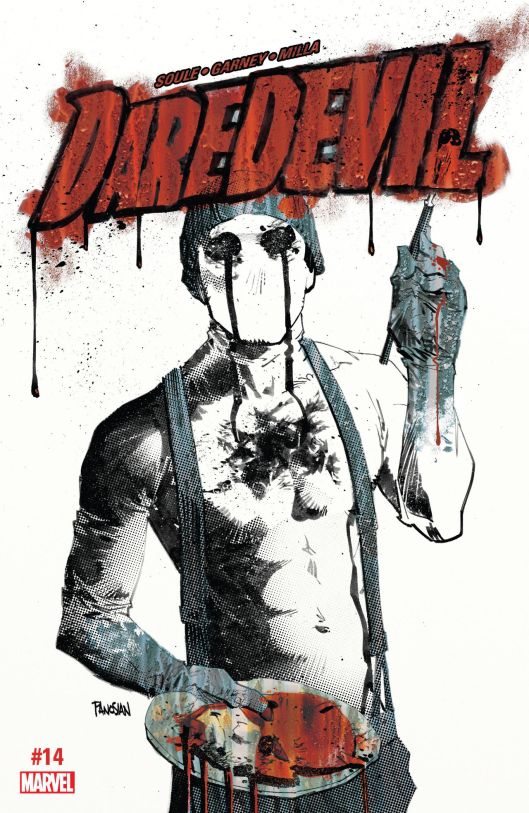 Its what transpires in Muse’s lair where Charles Soule really begins to ramp up the nerve jangling intensity as we, like Blindspot, gradually take in the sights of this dingy studio where Muse hones his craft with macabre inspirations. The uncertainly of what Muse has planned for Blindspot makes these scenes almost unbearable to witness. You know with twisting certainly in your gut that something terrible and horrifying is on the cards, but nothing can prepare you for the shock of that moment of inspiration Muse gets and the subsequent price that Blindspot invariably ends up paying for being so selfless and heroic in his mentor’s eyes.

The fabulous art by Ron Garney perfectly encapsulates the grim and brooding atmosphere that hangs over this issue. Together with Matt Milla’s exquisite and intense use of color, Ron Garney’s depiction of DD’s radar sense as Murdock pushes his uncanny hyper-senses beyond anything we’ve seen before, is truly remarkable. Muse’s lair, come Garret, is both a horrific slaughter house of raw materials and a showcase for his deranged labours. One moment you’ll be wondering what’s hanging on that lamp in the background… the next page you’ll be wishing you hadn’t asked! Some pieces even have ties to previous storylines, and there’s a startling revelation about the “Sanguinity” piece itself from The Dark Art during the final showdown between Daredevil and Muse in which the unseen becomes visible – and in more ways than one.

Daredevil #14 and The Dark Art arc as a whole is, to my mind, comic book storytelling at its finest. It’s a storyline that, while still very much part of the big events unfolding in the Marvel Universe at the moment, has nevertheless remained very much focused at grass roots level. Charles Soule has tapped into powerful themes and dark veins of horror with this arc as Muse’s and Daredevil’s worlds collided with fateful consequences for Blindspot. The characterization in this new Daredevil series has been exemplary from the start, and with this arc the bond between Daredevil and Blindspot as teacher and pupil has been key to its success, and subsequently makes the outcome here all the more tragic. Muse has been a terrific foil for Daredevil, we finally see Muse’s face in this issue but that doesn’t demystify the character, and I certainly hope we see a rematch between them one day.