Its another day in the office of webspinning and high-flying business for Peter Parker in The Amazing Spider-Man #5, as our internationally friendly neighbourhood Spider-Man faces-off against the terrorist group ZODIAC who stole his new webware device. With his cutting edge technology Peter Parker’s work has provided S.H.I.E.L.D with equipment while his Uncle Ben Foundation delivers humanitarian aid all over the world. Parker Industries and Spider-Man have gone global, but so have the wall crawler’s enemies! Having dealt with a private army called the War Goblins in Africa instead of helping Nick Fury and S.H.I.E.L.D track down ZODIAC, The Amazing Spider-Man #5 sees Spidey and Mockingbird regroup with their S.H.I.E.L.D allies at the London branch of Parker Industries, but will they be able to stop ZODIAC in time?

Yes, it’s another amazing issue from Dan Slott (& Christos Gage), as he brings the numerous plot threads that kicked off this new volume of Amazing Spider-Man together in “Set In Stone”, which finds Peter having to face up to his decision to go to Africa and stop the War Goblin’s and save Aunt May and her husband instead of helping S.H.I.E.L.D attack the ZODIAC bases – most of which incidentally turned out to be fake. But the repercussions of Peter’s choice must wait as they must stop ZODIAC first, and that means a trip to London for Spider-Man! 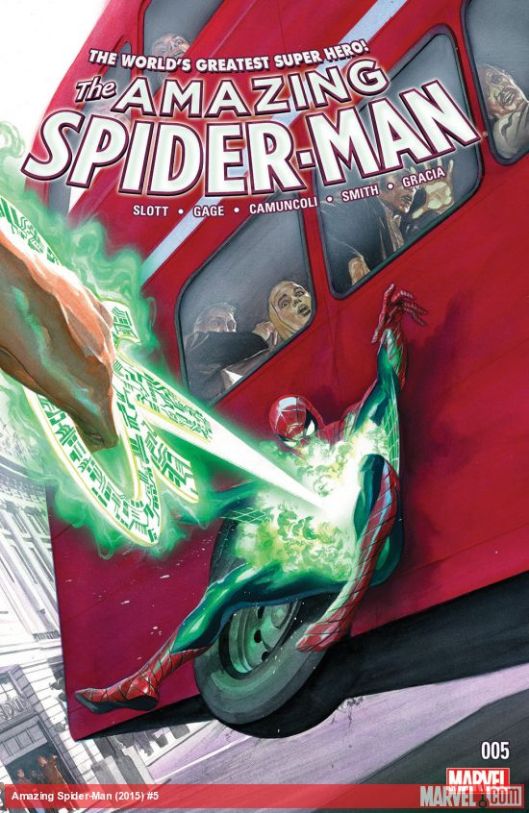 There’s all out action from this point on, even the Human Torch is amazed to see Peter taking charge like this, but when ZODIAC attacks the British Museum, its time for Spider-Man, Torch, Mockingbird, Prowler, and S.H.I.E.L.D to swing into action. Giuseppe Camuncoli’s artwork is as striking detailed as ever, each page is packed with action and energy, and the story flows along at a break-neck pace that doesn’t let up for a moment – especially during the fight at the British Museum – where lots of fun dialogue is peppered throughout the dynamic page layouts. The inks by Cam Smith are also superb, brining added clarity and texture to every scene, and coloist Marte Gracia dazzles with a mix of bold tones and vivid hues to accentuate the action.

I’ve really enjoyed this new direction for The Amazing Spider-Man. Even though Peter is now in charge of a huge global company, his principles have remained the same; with great power and responsibility permeating every aspect of his company just as it does his everyday life and his adventuring as Spider-Man. His work with S.H.I.E.L.D has also been handled really well, it’s a move that has brought in a lot of extra characters too, and its made the title feel even more diverse than ever. Yes, I’m a big fan of Spider-Man, and you know what, I’m really enjoying reading Spider-Man again on a regular basis, after something of a lull story-wise at times with the last volume, the wall crawlers adventures seem fun and exciting again.

This issue brings the first arc of this new volume to a close in fine style as the fight with Scorpio reaches a surprise conclusion. Peter also faces a press conference over the unauthorized use of the Parker Nanotech to interface with the London CCTV systems, which leads to some interesting changes at Parker Industries London HQ, there’s also the menace of a major villain’s consciousness lurking like a ghost in the machine, and a final reveal in the ominous coda that will give us plenty to mull over… In short, The Amazing Spider-Man is another terrific issue, I mean, just look at that gorgeous Alex Ross cover! It’s quickly becoming one of my favourite Marvel titles again, and even though I love all the new high-tech gadgets and vehicles I was overjoyed to see Spider-Man using the greatest Spidey vehicle of all to travel across the London skyline!

7 thoughts on “The Amazing Spider-Man #5 Review”