Following a surprise attack by new super villain, Mr Bloom, Jim Gordon must now face the ultimate test as Gotham’s corporate funded Batman. Having learned the full scale of the Powers Batman Programme, Jim Gordon tracked Mr Bloom to a long forgotten pathway in the Narrows. But his enemy has a nasty surprise waiting for him. Now, as Jim battles for survival in his confrontation against Mr Bloom, Bruce Wayne has a startling recollection about the past that could well change his life, and Gotham City, forever…

Batman #47 finds the new Batman caught in the vice-like grip of his own robotic Bat-Suit after Mr Bloom – Gotham’s new super villain who has been selling seed implants to criminal gangs that give them superpowers – turned the tables on him! This latest instalment of Scott Snyder’s and Greg Capullo’s exciting Superheavy arc entwines several key plotlines, with Jim Gordon fighting for his life, Batman #47 also heralds some unexpected developments for Bruce Wayne, and Mr Bloom’s grand schemes begin to blossom.

After refitting the Robo-Bat-Suit with a blocking device to neutralise Mr Bloom’s powers, Gordon tracked his foe to the area that was once know as Blossom Row in the Narrows. But when Mr Bloom somehow overrode his commands and turned Gordon’s “rookie” partner against him, Jim Gordon suddenly found himself at the mercy of his own Bat-Suit! Scott Snyder piles on the tension and suspense here as Gordon battles the combined threat from his own Bat-Suit and Mr Bloom. Meanwhile, Duke must find a way to escape from the new Iceberg lounge, and Bruce Wayne’s new life without the legacy of the Bat following the events of Endgame is thrown into turmoil when he is forced to look into the shadows of the past. 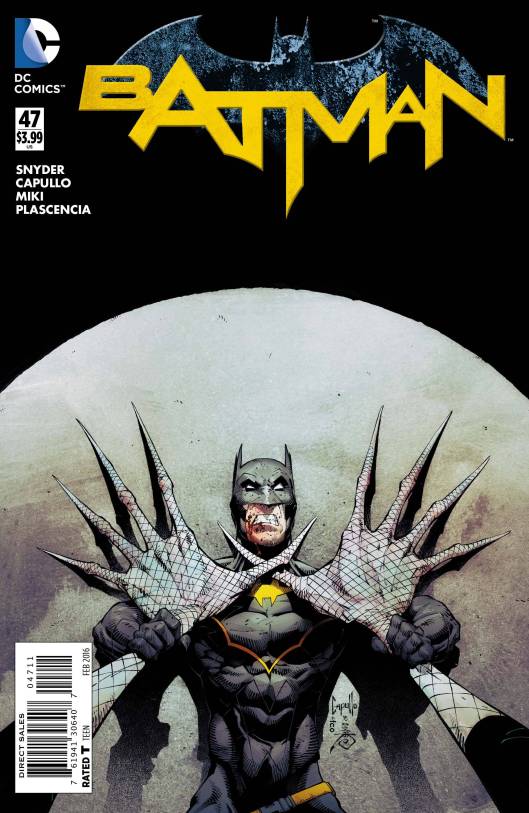 I really like how this issue unfolds. Snyder certainly puts Gordon though his paces in Batman #47, there’s a sense of poignancy and urgency in Gordon’s fight against his robotic partner, and the way he outwits his own suit whilst still managing to stay one step ahead of the super-powered attack of Mr Bloom shows just how far Jim has come since he stepped up to become Gotham’s new Batman. The scenes between Bruce and Duke in the subway station are another big highlight of this issue, and it’s a defining moment for these characters as Bruce’s past converges with the present as it screeches down the shadowy tracks of fate towards him.

Greg Capullo’s art remains as spellbinding as ever. The dynamic panel layout places us right at the heart of the action, especially during the fight between Gordon and his robo Bat-Suit. Gordon’s struggle reaches some death defying heights, and there is a distinct claustrophobic feel to Batman’s face-off with Mr Bloom as well that feels extremely disquieting. But it’s that aforementioned scene between Bruce and Duke in the subway station where Capullo really shines this issue, with a magnificent fusion of story and art – one that also packs an incredibly powerful emotional punch; and will no doubt probably become the most iconic moment of this arc. As ever, Danny Miki’s intricate line-work makes every aspect of Capullo’s art leap from the page, and FCO Plascencia’s glorious use of color and tone makes this issue of Batman a veritable feast for the senses.

This issue rounds off with Gordon and his team returning with a prisoner, but their victory is short lived, and its not long before Mr Bloom is able to strike back. Well, as another Bat-Truck bites the dust, it’s almost impossible to talk about this issue of Batman without totally spoiling the killer twist that awaits us in the closing pages. So, even though this review will be going out a bit late, let’s just say that a certain someone is back, and while this characters return might not have been wholly unexpected – especially considering Bruce’s surprise return at the start of this arc – it’s certainly a lot quicker than any of us could have expected!

Batman #47 is packed with big game-changing events, Scott Snyder gets right to the emotional core of this arc with this issue, and together with Greg Capullo’s excellent artwork; they bring a whole new slant to the Superheavy storyline in the most dramatic, and entirely unexpected way imaginable as we gradually begin progressing towards the conclusion. One thing’s for sure, waiting for Batman #48 is going to be no laughing matter…