The Doctor is trapped and alone at the heart of the Dalek Empire on the planet Skaro, surrounded by Daleks from throughout the ages. Having witnessed Clara, Missy, and even the TARDIS suffer maximum extermination at the orders of the Supreme Dalek, the Doctor now faces Davros simultaneously on the eve of his death, and via an uncanny twist of destiny, on a pivotal moment from when Davros was a child. Will the Doctor now kill this child, or will mercy prevail, as the Time Lord endeavours to risk everything to save his friend?

The Witch’s Familiar continues the two-part opening story of Series 9, with an even darker episode, written by show runner Steven Moffat, and directed by Hettie Macdonald (The director of 2007’s Blink). The cliff-hanger “Exterminate” ending of the Magician’s Apprentice left us all on the edge of our seats, when the Doctor appeared on the battlefield strewn with Hand-mines in Skaro’s distant past to exterminate the young Davros with a Dalek gun-stick. Now in The Witch’s Familiar, the story builds from this crucial moment as fate, compassion, and evil collides with far flung consequences as the Doctor confronts Davros on Skaro. 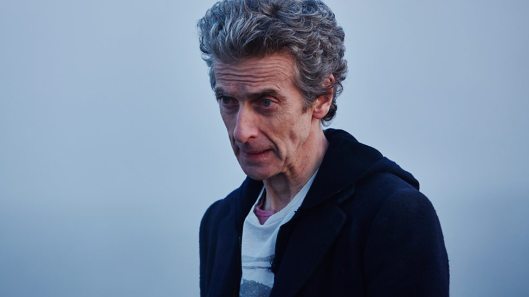 With the loss of Clara, Missy, the TARDIS, and without even the Sonic Screwdriver to help him, the Doctor must faces his ultimate challenge on Skaro as he wrestles with his conscience at the gates of Davros’ beginnings. The heart-stopping quandary of the cliff-hanger with the young Davros (brilliantly played by Joey Price) holds this episode on a constant knifes edge, while in the future, protracted, almost heart-felt exchanges unfold between the Doctor and Davros as the old enemies debate the Daleks ultimate defect and the fate of Gallifrey. This really plays to the strengths of Peter Capaldi’s Doctor, his performance is totally compelling, especially when the Doctor realises the Life Support / Hyperspace Relay in Davros’ chamber can touch the beating heart of every single Dalek on Skaro – once again presenting the Time Lord with the temptation of inflicting genocide on the Dalek race. Julian Bleach brings a cold, rasping, cocktail of evil and emotion to this ancient version of Davros, as the Daleks creator’s heinous scheme finally become apparent. Indeed, The Witch’s Familiar shows sides to the Doctor and Davros unlike anything we’ve ever seen before.

Naturally enough Clara (Jenna Coleman) and Missy (Michelle Gomez) were not killed during the climatic moments of The Magician’s Apprentice. Missy’s gleefully casual explanation quickly alters Clara’s perspective on their escape from extermination, with a gloriously psychedelic classic Doctor story / energy manipulating / teleporting just-in-the-nick-of-time solution. Clara’s uneasy alliance with Missy continues as they find a way into the Dalek city, where the Time Lord has gone AWOL from the Infirmary in Davros’ own chair, but his audience with the Supreme Dalek is cut short as the coils of Davros’ grand design ensnare him once more!

Much of The Witch’s Familiar revolves around the epic face-off between the Doctor and Davros, there are several moments here that revisit classic elements from Genesis of the Daleks (1975), and every scene between Capaldi and Bleach in the infirmary crackles with tension as the Time Lord confronts his arch-enemy. Peter Capaldi is excellent, he brings so much gravitas to his role as the Doctor, but it is Julian Bleach as the wizened Davros who makes for the most riveting viewing in this episode with a outstanding turn as the Daleks creator that is almost on a par with Michael Wisher’s magnificent original performance as Davros from Genesis of the Daleks. Indeed, when Davros asks the Doctor “Are you ready to be a God?” there are echoes of a similar debate that Davros once had with the 4th Doctor (Tom Baker) in Genesis of the Daleks – about unleashing a virus that could destroy all life in the universe – and the Dalek creator even eschews the 12th Doctor’s own mission statement from Series 8 when he asks the Time Lord “Am I a good man?”

The Daleks are at their ruthless best once more, cold, calculating, and extremely protective of Davros. We also get to see a lot more of the Dalek city in this episode, a glorious re-imagining of the original 1963 sets and city model designed by the late Raymond Cusick, where Daleks now fly amongst its gleaming futuristic spires and towers. Scenes in these eerie corridors also resonate powerfully with the Daleks classic debut story. Putting Daleks from different eras of Doctor Who together on screen was an inspired move for these episodes, the Supreme Dalek and his new & classic Dalek minions make a formidable sight, and director Hettie Macdonald ramps up the horror as Clara and Missy descend into the grungy Dalek sewers where we discover even more disturbing qualities about these mad Skarosian tanks of bubbling hatred.

Jenna Coleman is exceptionally good here as Clara. Missy’s plan, to hijack a Dalek and then get into the city with Clara hiding inside the Dalek’s casing, is also reminiscent of the very first Dalek story, when Ian (William Russell) hid inside a Dalek, and we really get a sense of Clara’s fear as the casing closes around her – chillingly echoing the soufflé girls fate in Asylum of the Daleks (2012). Michelle Gomez is brilliant as the evil Missy, her incarnation of the renegade Time Lord is wickedly enchanting, and Missy’s summation of the genetically hard-wired Dalek remains condemned to rot in the sewers leads to a startling lesson in Dalek vocabulary for the Impossible Girl. Perhaps most unexpected of all is the comparison Missy makes with the Cybermen to explain how the Daleks reload, which like much said here in the Dalek sewers, certainly offers us plenty to dwell over…

After their ploy to reach Dalek control succeeds, Missy treacherously begins to bargain with the Daleks, and offers Clara “gift wrapped” inside the Dalek casing. Meanwhile, it seems the Doctor has been foolish enough to look into his enemy’s eyes, and believing him sincere, he willing uses a fraction of his regeneration energy to power the Hyperspace Relay and grant Davros his dying wish – to live long enough to see the sunrise on Skaro. But to the Doctor’s horror his regeneration energy is suddenly leeched away by Colony Sarff (disguised as the coils of the machine) where it is transferred into every Dalek on Skaro, making them into Dalek / Time Lord Hybrids, while also simultaneously revitalising Davros during the process! Perhaps inevitably Colony Sarff (Jami Reid-Quarell), the serpentine henchman of Davros, does get a little overshadowed by everything happening in this episode, but his menacing presence is still used to great effect. 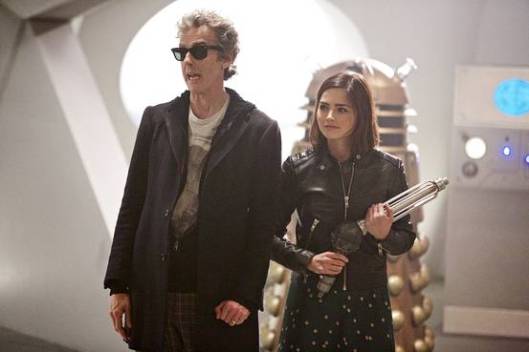 The exciting finale has Missy arriving in the Infirmary to assist the Doctor at a critical moment, the Doctor reveals that he knew what Davros was planning, and soon generations of decaying mutant Dalek hatred – revitalised by the Doctor’s regeneration energy – is bubbling up from the bowls of Skaro to wreak havoc on the Dalek Empire! If that wasn’t exciting enough, everything is rounded of with a magnificent scene where the Doctor has to see through Missy’s deceptions to save Clara from her Dalek casing. A showdown with the Supreme Dalek follows just as the revolt of mutant sludge strikes the Dalek city, while Missy also has a really good idea at an opportune moment, and the Doctor and Clara are finally reunited with the TARDIS thanks to the Hostile Action Dispersal System – first used in the 2nd Doctor story The Krotons (1968/9) and more recently in 2013’s 11th Doctor story Cold War – and a very nifty pair of sonic shades. Soon the Doctor and Clara are ready to leave Davros and the Daleks to their fate. The contents of the confession dial remain a secret for now. But the question of how a tiny sliver of mercy managed to find its way into the DNA of Clara’s Dalek remains, and it is this startling moment of realisation that provides the Doctor with the impetus to complete one life-changing task before they set off on their adventures in time and space…

The Witch’s Familiar saves an exciting time-twisting surprise for the last moments of this opening two-part adventure. Steven Moffat ushers in some big timey-wimey developments in this episode. Some will admire the scale and ambition of Moffat’s vision, others will no doubt balk at his playing fast and loose with the rich tapestry of the series’ mythology, but this is still probably one of Moffat’s most ingenious storylines, and the pay-off is all the more powerful because of the Doctor’s unwavering sense of compassion and mercy. 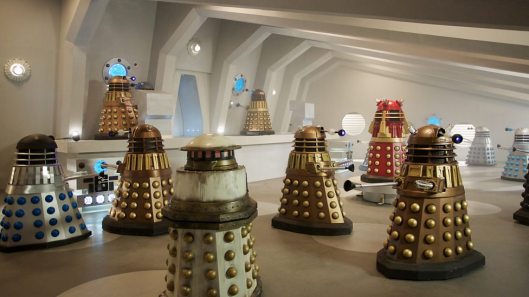 The Witch’s Familiar certainly lives up to the expectations of this first half of this new season opener. I found this episode to be just as exciting, if not more so because of the face-off between the Doctor and Davros, there were moments here that seemed like a natural extension of classic scenes from Genesis of the Daleks, the Daleks were well served by the story, and the conclusion was outstanding! Series 9 is already shaping up to be one of the best yet, I really like the dynamic between the Doctor and Clara now, they make a great team, Missy was also excellent in these episodes, and the return of the two-part stories make for most a welcome – and long overdue – addition to the programmes format. Roll on the rest of Series Nine!