Gang war breaks out in Batman Eternal #3 as Gotham City is rocked by a power struggle within the criminal underworld. With his old friend Jim Gordon arrested for causing the train crash in the subway station, the Dark Knight continues his search for evidence to help him. When the crime war begins GCPD seems unwilling to help Batman contain the violence. Also, get ready for the New 52 debut of Stephanie Brown!

With Gordon languishing in a cell at GCPD, the situation is grim, and even Batman’s analysis of the evidence fails to offer up many new leads. The return of Carmine Falcone also spells big trouble for the Penguin; soon Gotham is reeling from an explosive outbreak of violence. Batman Eternal #3 is a blisteringly good read, with its story and script by writers Scott Snyder and James Tynion IV (consulting writers Ray Fawkes, John Layman, and Tim Seeley) and great art by Jason Fabok, the events following the aftermath of the train crash begin to escalate dramatically.

There are some great scenes at the GCPD, particularly where Lieutenant Bullock and Captain Sawyer have a heated confrontation with Forbes. Gordon’s arrest has really shaken the department to the core, tempers are frayed, and it’s not looking good for Gordon either. The responsibility for arresting Gordon is also weighing heavily on the shoulders on the new recruit Jason Bard; this certainly wasn’t how he expected his first day on the job to turn out. Bard’s conversation with Gordon in the holding cells is especially poignant, even Jim Gordon feels the evidence is stacked against him, it’s a great scene, and Scott Snyder and James Tynion IV pitch it perfectly. 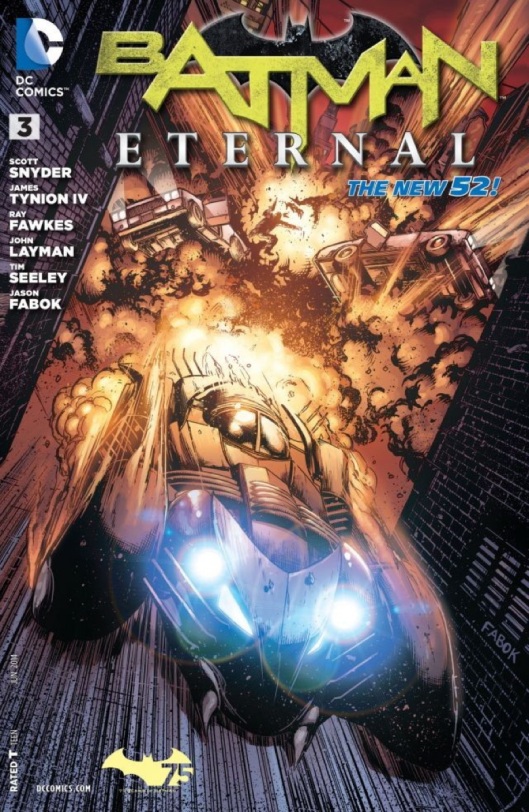 As the scene shifts to the Penguin at his Iceberg Casino the full implications of Falcone’s return to Gotham begins to sink in. However, there is more at stake here than just the Penguin’s empire. The corruption in Gotham reaches all the way to the top, as shadowy meetings begin to shift the balance of power for all concerned.

Batman Eternal #3 features some terrific art by Jason Fabok, the action doesn’t let up for a moment, and with such a large cast of characters, Fabok does a terrific job, and the colors by Brad Anderson are excellent. I really like the pages in the Batcave, the attention to detail here is staggering. The moments in GCPD are also handled really well, drawing you into the story. The Batmobile adorns Fabok’s awesome cover for Batman Eternal #3 as well, and the car looks stunning in the issue too. I really like this Batmobile, it’s like a pimped up version of the Tim Burton movie Batmobile, and I hope we get to see a lot more of it as Batman Eternal progresses.

Batman Eternal #3 also features the long awaited debut of Stephanie Brown in the New 52 continuity. Its great to see Stephanie again, I always liked the character, and Scott Snyder and James Tynion IV make this issue a fitting introduction for her. Snyder and Tynion have remained entirely faithful to the essence of the character, and they way her involvement in events also ties into the main storyline of Batman Eternal is really inspired.

Batman Eternal #3 is another great issue in this new weekly series. With great plotting and characters, the debut of Stephanie Brown, and with all the big changes affecting the criminal underworld and GCPD, this is an issue not to be missed!