Savage City begins in Batman #30 as the Dark Knight faces the greatest challenge of his early crime fighting career. The Riddler’s plan to hack into Gotham’s power grid has succeeded; the restraining walls protecting the city have fallen, leaving Gotham at the mercy of the super storm. Batman is defeated, missing and presumed dead. The Riddler now has free reign over Gotham, a city now flooded and overgrown with dense vegetation, and transformed by Nygma’s grand design into a deadly post-apocalyptic nightmare.

The third arc of Zero Year introduces us to a radically different version of Gotham City. Its one we first glimpsed way back in Batman #21, where the city has been moulded into a completely new environment by the Riddler’s scheme. Scott Snyder’s and Greg Capullo’s new take on the Dark Knight’s early career continues to explore new territory, as Batman evolves to survive amidst the urban wilderness that Gotham has now become.

While the Secret City and Dark City sections of Zero Year revisited many of the classic elements from Batman’s origin, with this third and final chapter, Savage City, the foundations are set for the ultimate showdown between Batman and the Riddler. Snyder and Capullo’s reimagning of the Bruce Wayne’s early years has been nothing short of a revelation, offering a modern perspective, whilst remaining entirely respectful to the characters time-honoured legacy.

The intriguing opening moments of Batman #30 leads masterfully into the beginning of Savage City. With all of Gotham laid out before us we rejoin Bruce Wayne as he wakes to find himself in a very different city to the one he knew. Having escaped from the crashed weather balloon Bruce was saved by a family and taken in. In the month that he was unconscious the Riddler has effectively cut Gotham off from the outside world, there is no way in or out, and the flooded city has become engulfed by vegetation. 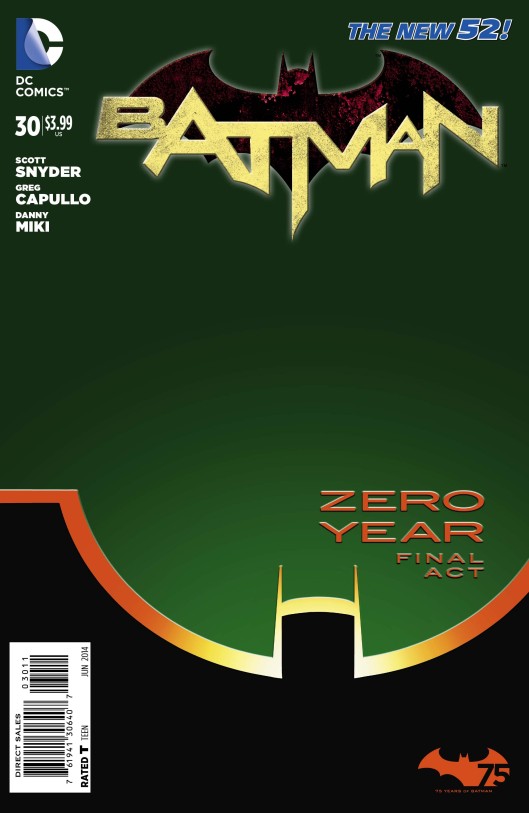 Batman is believed to be dead. Now the Riddler appears on a giant screen once a day to issue a challenge to the people of Gotham, saying that if anyone can present him with a riddle he cannot solve, he will return control of the city to them. While it sounds simple, there is a heavy price for failure, and the Riddler takes no prisoners. It is during one such address that Lieutenant Gordon instigates a plan to strike back at the Riddler.

Now that the Riddler has control over the grid, he can work everything remotely, machinery, street lamps, automated surveillance, and no one knows where he is. Having transformed Gotham the Riddler has created the ultimate riddle, changing the environment of the city to revert things almost to a primal level, and thereby challenging the population to evolve if they are to have any chance of finding and defeating him. Savage City shows how the Riddler has embodied the issues of climate change, evolution, harsh economic times, and global terrorism, in order to challenge the city to outwit him – presenting them with his conception of Gotham’s future – having orchestrated events to implement his vision by churning all these existential influences together and plunging Gotham into an entropic maelstrom of his own narcissistic design.

The Riddler takes centre stage this issue, as the narrative unfolds it becomes clear how his scheme is engrained within the structure of Zero Year itself, even the stories name is intrinsically linked to Nygma’s plans. I also really liked the opening scenes, where the young Duke Thomas fills us in on what’s been happening. Bruce also makes contact with Alfred, in a particularly moving scene, where, believing he has failed the city, he has to confront his innermost doubts and decide whether or not he can claw himself back from this defeat. Scott Snyder writes such beautiful, emotive dialogue for this scene, and you can almost feel Bruce’s voice cracking with raw emotion.

From its lush green cover, to the incredible reveal of Gotham’s new skyline, Greg Capullo’s art depicts the ravaged city magnificently, smashed by storm and flood, it is now a bleak, desolate place overrun with lush vegetation. The moment where Bruce wakes up and we pull away from the glass of water, is simply sublime, and I really liked how Capullo brings the harsh, grimy, reality of this new Gotham to life on the page. Batman #30 looks incredible, Danny Miki’s inks and FCO Plascencia’s colors are as stunning as ever, you’ll really want to read this issue a few times just to soak up the visual spectacle of it all, it’s breathtaking.

Batman #30 is a terrific issue, packed with action, and an exciting conclusion that is punctuated with another defining moment for the saga. Savage City looks set to be the most exciting segment of Zero Year of all, and I can’t wait to see what Snyder and Capullo have in store for us as Zero Year progresses towards its conclusion.