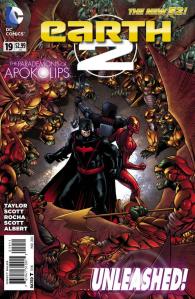 The Arkham World Amy Base is in ruins following Superman’s attack, Flash, Mr Terrific, and Terry Sloan have been captured, and the Parademons of Apokolips have risen from the fire pits to invade Earth 2. Batman managed to reach the lower levels of Arkham and release Jimmy Olsen and Aquawoman from their stasis chambers. Now as the forces of Darkseid prepare to turn Earth into the New Apokolips, the Dark Knight of Earth 2 discovers there could be something in Arkham that could help him bring Superman’s reign of terror to an end…

Tom Taylor continues to make his stamp on this series as Earth 2 #19 kicks into overdrive. As Superman departs with his captives, Dr Fate is still delirious after his battle with the man of steel, and Red Arrow must face the Parademons attack. Having killed the Joker in his stasis chamber, Batman informs Major Sato and the others he has arranged an airlift for them. Jimmy Olsen reveals he was imprisoned for hacking Sloan’s personals files, were he learned about the alien Sloan keeps in Arkham’s sub basement. Major Sato denies all knowledge but Red Tornado quickly pinpoints the location and Aquawoman smashes a way into the sub basement. 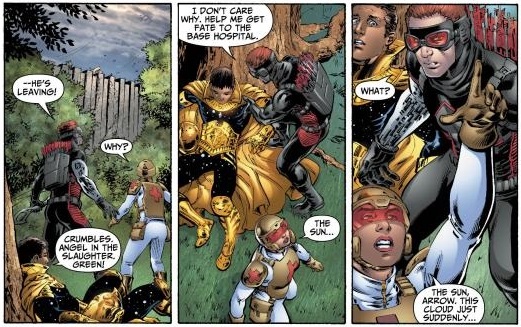 As they make their way into the sub basement Taylor uses this opportunity to explore the new characters introduced last issue. We already knew Jimmy Olsen was part of the Accountable, a terrorist group that hacked the World Army systems and released thousands of documents online, his photographic memory also proves invaluable, and the reasons for his incarceration soon become clear. Aquawoman is a real force to be reckoned with, she uses her immense strength to break into the sub basement, and the guards there can offer little resistance. Furthermore, considering the atrocities we lean the World Army have inflicted on the Queen of Atlantis and her people; Marella is surprisingly merciful to these soldiers considering how easily she could have killed them.

The mystery surrounding Batman continues to build as they make their way towards the cell holding the alien. His ambivalence towards Red Tornado is particularly striking, especially as Lois Lane now inhabits the androids mind, and she obviously knows more about this Batman’s predecessor than he seem to know about her. The identity of the alien is another of Earth 2 #19’s big surprises, as is the reaction to one of its rescuers.

From the opening scenes of the Parademons swarming in front of the sun, through to Superman’s devastating attack on Washington, the big action set-pieces are stunning. The pencils for Earth 2 #19 are provided by Nicola Scott and Robson Rocha, with inks by Trevor Scott and Oclair Albert, with colors by Pete Pantazis and letters by Dezi Sienty. I like how the mystery slowly unfolds in Arkham, with all the characters getting a good share of the action, before Superman goes balistic with the Washington Monument. The reason for capturing Mr Terrific and Sloan also becomes clear as Bedlam attempts to take control of their minds.

Superman’s message of conquest reverberates around the world as Batman and the others escape from Arkham and are confronted by the massacre on the surface. The Dark Knight gives Red Tornado coordinates to get Olsen and the alien to safety, having arranged for a very special air lift of his own to be waiting for him. With their heroes and armies defeated, the people of Earth 2 look on in fear as the Parademons invade. However, the fiery wound torn in the Earth’s surface by Steppenwolf’s demise continues to burn, and somewhere amidst the bones of the millions who died here, a glimmer of hope begins to shine…

Earth 2 #19 is one of Tom Taylor’s best issues so far, The Dark Age storyline has given us plenty of surprises already, and with this third instalment Taylor keeps us guessing right up until the final page as the pieces begin to fall into place. To say more would absolutely ruin the intricate plot twists that Tom Taylor has woven into this superb issue. Instead, prepare to be swept along by the epic scope of the story and art as Apokolips sets its sights on Earth 2, and look forward to the discovering the new Batman’s origin in the Earth 2 Annual #2.