It has been twenty five years since The Sandman changed the world of modern comics, now best selling writer Neil Gaiman’s fabled series has finally returned, with the stunning prequel: Sandman Overture, which tells the events leading up to Morpheus’ capture by an occultist at the start of the Sandman series. This incredible six issue mini-series by the legendary Neil Gaiman marks the return to the series that made him famous. Sandman Overture also features the stunning artwork of award winning artist JH Williams III, whose lavish imagery provides a suitably epic vista for the Sandman’s origin. Sandman Overture will feature cameos by many popular characters, including The Corinthian, Merv, Pumpkinhead, and Morpheus’ siblings Death, Despair, Desire, Delirium, Destruction, and Destiny, in a story revealing how the Dream King could be captured as we discover the untold secrets of the Endless…

Sandman Overture #1 takes us to a distant star system, where a tiny world with two moons and its three distinct species, of furred humanoids, swarming insects, and delicate plant life with the most beautiful minds of all live as one. The harmonious dreams of one of one plants unfurls like its petals to welcome that which it has never encountered before, a visitor who is soon consumed by a tragic fate, one that ripples out across the dreamscape…

As the Corinthian stalks a new victim in London 1915, Destiny studies the pages of the universe he carries. Turning a page the rarest of events occur, Destiny summons his sister, Death, as he walks his gallery, even though he does not know why, Death knows the events of a hundred galaxies away heralds a dark turn of events for Dream.

George Portcullis has the strangest recurring dream, he manages an office in London for a man he has never met, but one day his master finally arrives, Morpheus the Dream King, and he is expecting a visitor, the Corinthian. Displeased with the Corinthian’s conduct, Morpheus prepares to pass judgment on his creation, but the Dream King is suddenly compelled to leave by a strange calling he has never experienced before… 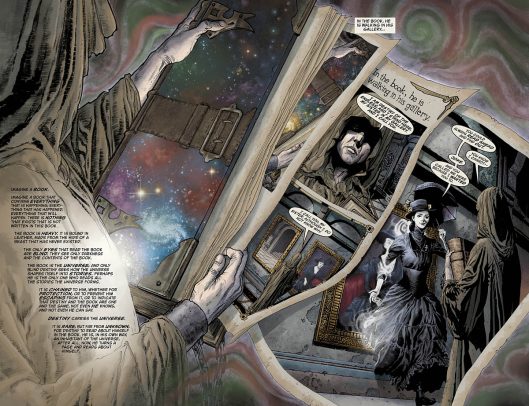 Sandman Overture #1 is everything we could have hoped for and more. Neil Gaiman’s long awaited return to the Sandman universe brings us an unimaginable box of delight to enjoy, with its grand scope and scale, intricate storyline, and wonderful characters you are immediately immersed in the sheer majesty and dark splendour of the Dream Kings world. The opening events in a distant galaxy masterfully draws your into the story, which quickly branches out to encompass the Corinthian’s sinister ploy to ensnare his next hapless victim, while the pages of the cosmos splay out before Destiny as he summons Death who in turn seeks council from her brother. We join Morpheus as he arrives at his London office within the dream of George Portcullis. In his meeting with the Corinthian, the Dream King voices his displeasure at how the Corinthian has defiled the laws set by Council of the First Circle.

However, before Morpheus can act, he is summoned away by unknown forces. Resisting for a time at least, the Dream King returns to his castle, where he is greeted by Lucien. As he dresses for battle, Morpheus is puzzled when Lucien asks if he is coming back. Morpheus’ reply to the question is cut short, as he is suddenly taken away, pulled across the cosmos, where he finds he is not the only one compelled to answer this strange calling.

The art by JH Williams III is simply stunning, every page is a glorious wide screen landscape, with exotic alien worlds, an uncanny glimpse into the pages of Destiny’s book against the gleaming expanse of the universe, to Morpheus’ dark London office and the wonder of his castle, Sandman Overture #1 surrounds and binds you within the rich tapestry of the Sandman’s mythology. The chilling POV from the Corinthian’s perspective are a macabre delight, alien’s worlds are rich and teeming with strange life forms, and Morpheus’ and his siblings look regal and magnificent. The colors by Dave Stewart complete these beautifully rendered scenes, with the striking pallet used for the alien world gradually giving way to the  swirling hues of Destiny’s realm, before plunging into the monochrome tones of Morpheus’ office that slowly warm with color as he arrives. Todd Klein’s letters complete the seamless blend of fantasy and reality, fusing perfectly with JH Williams’s art, entwining us with Neil Gaiman’s exquisite narrative to make this wondrous issue complete.

Sandman Overture #1 is the beginning of this 6 issue, bimonthly miniseries. By the time you reach the final page of this first issue you will be absolutely captivated by Neil Gaiman’s Sandman Overture. This book feels as if your are welcoming back an old friend, everything is familiar, but it also possesses a vibrancy and freshness of a treasured memory.

With its incredible double page interior artwork; choice of covers by JH Williams and Dave McKean, this release by Vertigo Comics is a superb return to the world of Neil Gaiman’s acclaimed comic book series.