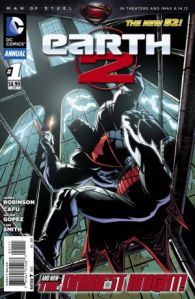 The new Batman of Earth 2 finally makes his debut in this months Earth 2 annual #1, while the World Army gears up to confront the return of Steppenwolf from his stronghold in Dherain. James Robinson draws together many ongoing plot threads, setting the stage for the next challenge the New Wonders of Earth 2 must face.

Following a lead that takes him to Cambodia, the Atom goes undercover in Phnom Penh to find a war criminal, Henri Roy, who runs a lucrative black market operation dealing in high-tech weaponry and cybernetic enhancements. The Atom allows himself to be captured so he can get to Henri Rory, unaware that a new Batman is watching from the shadows. As soon as Captain Pratt turns into the Atom he is attacked by the bodyguards, and then Henri Roy himself, after he dons a battle suit. 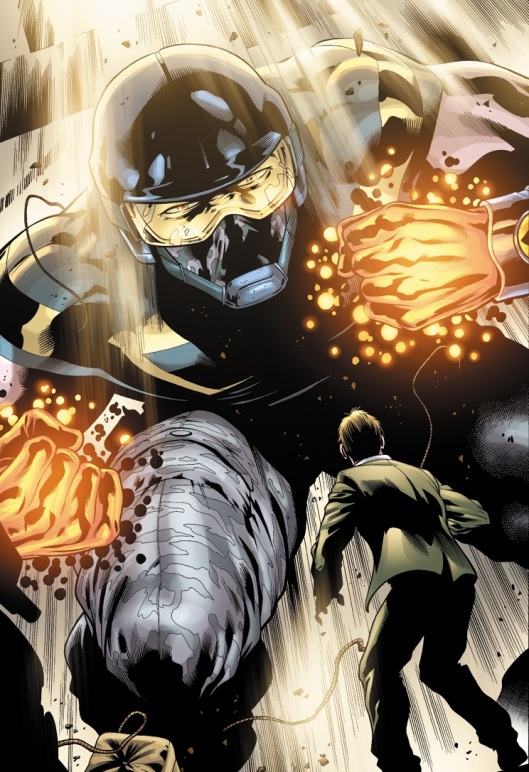 The Atom manages to defeat and capture Henri Roy, with some unexpected help from Batman, before meeting up with Major Sonia Sato. It turns out that the war criminals son, Henri Roy Jr, was the one who told them where his father was. He decides to join the World Army, in an attempt to make up for what his father has done, and to find an explanation for the terrible headaches that he used to suffer from. Major Sato then informs the Atom that Steppenwolf is now the ruler of Dherain.

After a short interlude on the Sentinel (The World Army Central Intelligence Hub) where Commander Khan sends Captain Steel to investigate one of the fire pits caused by Sloan in Rio, we rejoin the Batman as he fights Mr Icicle in Colmenar Viejo, Spain. The new Batman of Earth 2 is hunting a being known as Kanto, the Assassin of Apokolips, who helped enhance humans like Mr Icicle during the Apokolips War. Batman has learned that Kanto is calling in his markers to those he empowered, intending to uses them in some new plan he is devising. After dealing with Mr Icicle and questioning him, Batman decides its time for him to find out more about Hawkgirl.

Over in the ruins of Gotham City, where the world once reeled from the fiery wrath of the Agonists, mutated monsters now roam this desolate place. It is here that Mr Miracle and Barda have been since they escaped from Steppenwolf. They are searching for the mysterious new Batman and the cave he reportedly dwells in. Mr Miracle is worried that the time Barda has spent hunting mutants could have revealed their location to the World Army, he want to move on, but before they can act Barda is suddenly attacked by Fury.

Earth 2 annual #1 is another great instalment of Earth 2 by James Robinson. As well as introducing the new Batman, the spotlight initially falls on the Atom and his secret mission to Phnom Penh. We get a much greater insight into the character of Captain Pratt, as he recalls events leading up to the nuclear explosion that created him, as well as having to come to terms with being the only survivor from his platoon and his new found powers.

The artwork for Earth 2 annual #1 is shared by Cafu and Julis Gopez, with Cafu and Cam Smith on inks, and Pete Pantazis on colours. Their work on this first Earth 2 annual is excellent, especially during the scenes where Captain Pratt reflects on the past, and the moment where he becomes the giant sized Atom and pursues Henri Roy’s robotic suit across the rooftops.

It was also good to see many of the supporting characters again, including Commander Khan and Major Sato, as well as introducing Captain Steel and the new subplot involving the fire pits. We also get to see Mr Miracle and Barda exploring the ruins of Gotham City, before they are attacked by Fury who has been sent by Steppenwolf to find them.

The hype surrounding the new Batman has helped build expectations for Earth 2 annual #1, and the cover by Andy Kubert and Brad Anderson is really striking. While most of the plot is actually centred around the Atom and his mission, when the new Batman does appear, it’s done with incredible style. He swoops in to take out the reinforcements attacking the Atom, before sneaking back into the shadows, where he listens in on the news that Steppenwolf has announced his presence in Dherian. We then follow Batman as he searches for information about Kanto, the Assassin of Apokolips, and fights one of the augmented humans he created in the war, Mr Icicle.

The identity of the new Batman remains a mystery for now, his search for Kanto will no doubt bring him into contact with the rest of the New Wonders of Earth 2 soon enough, and I look forward to seeing how his story develops in the main series. Sadly writer James Robinson has announced that he is leaving Earth 2 as of issue #16, and will no longer be working for DC Comics. This news came as something of a shock to fans of the series, and his successor will certainly have a lot to live up to. Despite the news of Robinson’s departure, Earth 2 annual #1 is still an exciting issue, full of intense action and it sets up terrific a closing scene that will be continued next week in Earth 2 #13.