Journey to the Centre of the TARDIS 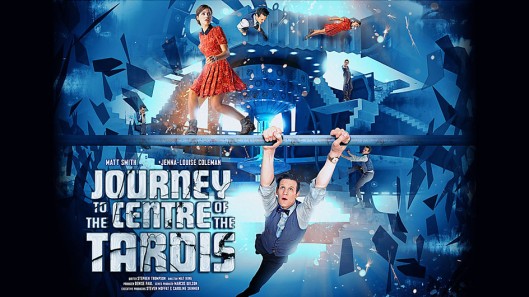 After the TARDIS has a nasty encounter with a salvage vessel, the time machine is dragged into the ship and dumped onto a scrapheap where it starts leaking time. The space faring Van Baalen Brothers think they have just stumbled upon one the of the greatest hauls of they‘ve ever made, a unique space time machine like the TARDIS could make them a fortune, and they intend to break the TARDIS up and sell it to the highest bidder.

Naturally the Doctor is not prepared to let the TARDIS be plundered without a fight, especially when Clara becomes lost in its corridors, so he puts the TARDIS into lockdown mode and activates the self destruct system – giving them just 30 minutes to find Clara before the ship collapses in on itself and is completely destroyed. 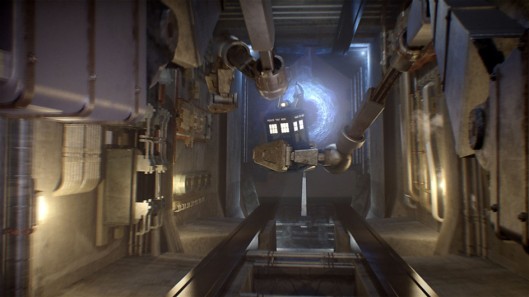 The Doctor and the and Baalen Brothers must find a path through the infinite labyrinth of TARDIS corridors to save Clara, encountering bizarre anomalies and echoes within hidden depths of the malfunctioning time machine, unaware that sinister monsters are also tracking them through the ship, growing angrier as they prepares to attack. While the Doctor and the Baalen brother’s battle to stay alive, Clara makes her way through the TARDIS, she finds many amazing rooms, and stumbles upon one of the Doctor’s greatest secrets…

The title of this episode is enough to raise fan expectations to fever pitch, and for the most part, Journey to the Centre of the TARDIS lives up to its thrilling premise. This episode is written by Stephen Thompson, who also penned the 2011 story The Curse of the Black Spot, and he takes us on a tantalizing adventure right to the heart of the TARDIS itself. The Doctor’s time machine has been explored many times during the shows history: the Doctor and Sarah Jane found a new wood panelled control room in The Mask of Mandragora (1976), in The Invasion of Time (1978) the Sontarans broke into the TARDIS and chased the Doctor and Leela through a vast number of rooms, a majestic cloister appeared in Logopolis (1981), and the healing properties of the Zero Room played a vital role in stabilising the 5th Doctor’s regeneration in Castrovalva (1982). Since the series return, only the Doctor’s Wife (2011), has really featured the interior of the TARDIS to any great degree, after the time machine was taken over by the parasitic entity House who tortured Amy and Rory with nightmarish visions as they fled through the corridors. 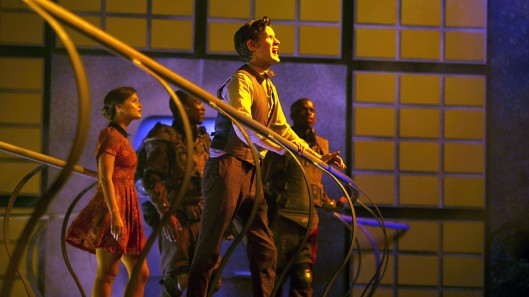 Indeed, The Invasion of Time was the last story to really explore the TARDIS interior in 1978, but due to industrial action, location filming at an old Victorian asylum had to double for the ships vast network of corridors and rooms, hardly creating the desired effect that would have been created by more ambitions studio sets. Fortunately there are no such problems here, and Stephen Thompson’s action packed story has given designer Michael Pickwood, the man responsible for the new TARDIS console room that debuted in the The Snowmen (2012), and director Mat King a field day as the TARDIS corridors and rooms are explored like never before.

There is a real sense of depth and scale as the long TARDIS corridors lead to some amazing rooms: there is an enormous swimming pool, a grand library steeped in shadows, the architectural reconfiguration chamber, an observatory, the Eye of Harmony, and a vast chasm which leads to the incredible splendour of the bizarre void that awaits the Doctor and Clara at the centre of the TARDIS itself. We experience the immense beauty and wonder of the TARDIS in this episode, as well as the dark terror that can be lurking around the next corner, and it’s also quite a shock to see the TARDIS and the console so badly damaged.

This is a very claustrophobic story that really pushes the Doctor’s and Clara’s trust issues to the limit. Matt Smith and Jenna-Louise Coleman are constantly developing new aspects to the Doctor and Clara’s relationship; it makes for some really intense scenes, especially as the imminent destruction of the TARDIS forces them to confront their innermost doubts about each other. The zombie-like monsters are also very creepy as they stalk the corridors, their charred bodies move with unnatural speed, making them incredibly menacing.

As the Doctor and Clara make become trapped the identity of the emaciated monsters – their slightest touch burns horribly – is revealed. They seem to have a link to Clara, as if they are some kind of echo from the future, one where the Doctor has failed to save her again. Later when they are faced with a bottomless abyss, the Doctor confronts Clara, revealing his past encounters with Oswin and the Governess to his companion, an emotional moment which leads to them taking the greatest leap of faith of all. Once inside the centre of the TARDIS the markings burnt into Clara’s hand at the start of the episode help he Doctor find the time rift that was caused when the Baalen Brothers captured the TARIDS. Knowing that the memory of these events may be erased when the Doctor enters the rift, Clara asks the Doctor about his true name, the one she read in the book she found in the library about the Time War. The Doctor stops her from saying his name, before leaping into the rift, travelling back to the beginning of the adventure to prevent the TARDIS being captured. 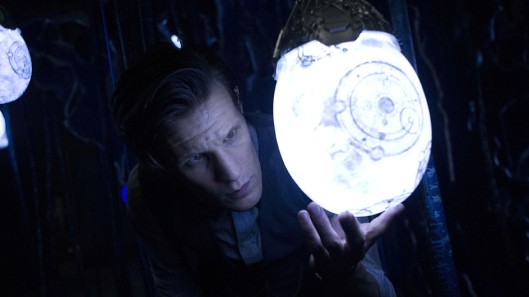 The Baalen Brothers, Gregor (Ashley Walters), Bram (Mark Liver), and Tricky (Jahvel Hall) are a motley bunch of intergalactic rag-and-bone-men, who take great delight in assessing how much money the TARDIS will make them, but unwittingly find themselves trapped inside the very prize they thought they had just captured. There are some great moments as we see them exploring the TARDIS, using their computer to put a value on everything they find, and it’s an interesting concept to imagine this incredible time machine being broken up and sold as scrap. It’s also quite disturbing how the Baalen Brothers made their younger brother, Tricky, believe he was an android after he was injured in an accident. The Doctor is rightly appalled by their actions, deeming it just a cruel trick played by the Brothers to alleviate their boredom. Events inside the TARDIS force the Baalen Brothers to admit the truth to Tricky, which leads into a nice coda at the end of the episode.