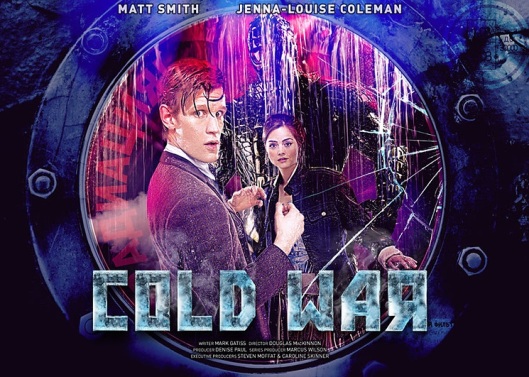 The Ice Warriors are amongst the most popular monsters ever seen in Doctor Who. Ever since they first battled the Second Doctor (Patrick Troughton) in The Ice Warriors (1967) and The Seeds of Death (1969), and then later the Third Doctor (Jon Pertwee) in The Curse of Peladon (1972) and The Monster of Peladon (1974), fans have been eagerly awaiting the day when the Martian warriors from Mars would return to menace the Doctor again. Now at long last the Ice Warriors are back, in a fantastic story by Mark Gatiss, to face the Eleventh Doctor (Matt Smith) and his new assistant Clara Oswald (Jenna-Louise Coleman) in the eagerly anticipated episode – Cold War.

When the Doctor and Clara’s trip to Vegas doesn’t go according to plan they suddenly find themselves on a Soviet submarine which is rapidly sinking to the bottom of the ocean at the North Pole. After the TARDIS Hostile Action Displacement System causes the ship to dematerialise, leaving them stranded, the Doctor realises they have arrived during the cold war in 1983, at the height of the tensions between the worlds two power blocks. The submarine and her crew are returning from a top secret expedition to the North Pole where they discovered a creature frozen in the ice; an Ice Warriors that he been dormant for over five thousand years. Now it has escaped and is making its way though the submarine, where it confronts the Doctor, but a crewmember sneaks up behind the Ice Warrior and disabled it with a cattle prod. 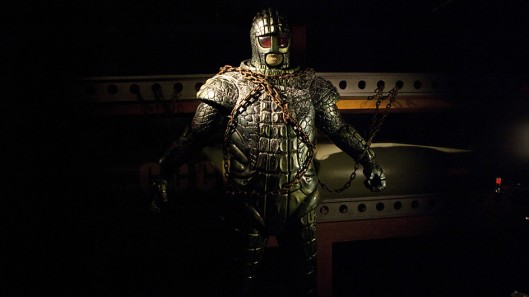 Now that the Ice Warrior is chained up the Doctor explains that the Ice Warrior is Grand Marshal Skaldak, one of the greatest warriors of the Martian race. Clara volunteers to negotiate with the Skaldic, but she is horrified when it becomes apparent that the Martian has escaped from its armoured shell, and is now prowling the ship in its natural form! Later when Skaldak attacks Professor Grisenko and Clara, the Doctor and Captain Zhukov rush to help them. But the Martian has used the tense standoff to summon his armour, and once he is back inside it, the Ice Warrior storms the bridge and takes control of the submarines nuclear missiles. Skaldak knows his distress call will never be answered, his people are no more, but he can still avenge his race and bring this planets cold war to a final end…

Clara Oswald’s first adventure into the past is fraught with danger as she has to learn to cope quickly as events begin to spiral out of control on the submarine. This is another important episode for Clara as it helps to clarify her role as the new companion, by placing her in situations that reinforce the programmes basic concepts, such as the TARDIS translation matrix. In fact, this is the third time that writer Mark Gatiss has penned a new companions first adventure in Earth’s past – the first being Rose in The Unquiet Dead (2005), and then Amy in Victory of the Daleks (2010). There are plenty of chances for Jenna-Louise Coleman to shine as Clara has to cope with being stuck on the submarine and running for her life to escape from the Ice Warrior after it emerges from its armour. There are no clues this episode about the ongoing mystery of Clara Oswald’s origins, although there are some great character moments for her. One of Clara’s best scenes is where she becomes trapped with the Ice Warrior, it’s highly reminiscent of Robert Shearman’s 2005 episode Dalek, and it’s a great tension filled moment that has quite an unexpected payoff at the episodes climax. 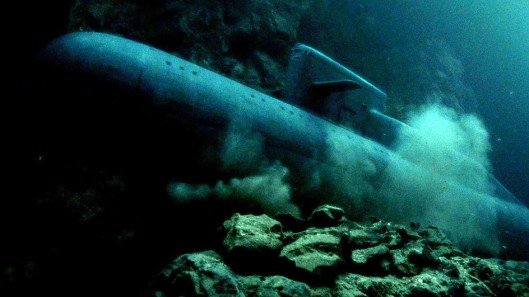 The submarine sets for Cold War are really dark and claustrophobic, with steam billowing from pipes and water streaming everywhere, director Douglas Mackinnon really builds up the tension as the vessel sinks and the Ice Warrior goes on the rampage. It really is remarkable how the cast and crew managed to film in such conditions, the sets are so convincing, and with all the water and steam gushing through the fractured hull it looks incredibly realistic.

Right from the moment we catch sight of the Ice Warrior frozen in a block of ice, there is a brooding sense of anticipation until it breaks free attacks the crew. The new look Ice Warrior retains many of the classic element of the original monsters design, but with a few slight changes, namely having three fingered hands instead of its predecessors clam-like pincers. What is really remarkable about Skaldak is how fast he moves. The old Ice Warriors were slow and lumbering, but Skaldak (Spencer Wilding) seems to power through the submarine, stomping through the flooded corridors and killing anyone that gets in his way. It goes to show just how successful the original design of the Ice Warrior really was, the creature’s sonic weaponry is still present here, their distinctive rasping voice – provided by Nicholas Briggs – is slightly deeper, but the reptilian hisses are the same. The biggest change is how Grand Marshal Skaldak is capable emerging from his armour, revealing his true form, something that even the Doctor has never seen before. There are some really creepy moments as Skaldak prowls the ship (particularly when he dismembers some of the crew to study human anatomy) once he is outside his cybernetic armour, although we only see his clawed hands, his face is revealed during the closing moments on the Bridge as the Doctor  and Clara try to stop him firing the nuclear missiles..

Mark Gatiss has crafted a superb story, drawing on such classic sci-fi influences as The Thing From Another World and Alien, while setting it on board the cramped environment of the Soviet submarine. Cold War is a clear homage to the classic base under siege stories from the 2nd Doctor’s era, where the Ice Warriors first appeared in 1967, and Mark Gatiss has done a fantastic job with this thrilling episode for the Ice Warriors return.

I like how Mark Gattis has taken the opportunity to give a greater scope to the Ice Warriors and their culture. The first Ice Warrior the Doctor encountered (Varga) had been entombed in a glacier for thousands of years, later he stopped them from invading Earth and altering the planets atmosphere with deadly seed pods, before encountering them in the distant future on the planet Peladon, and the 10th Doctor (David Tennant) also mentioned them in The Waters of Mars (2009). There are huge gaps in the mythology of the Ice Warriors which Mark Gatiss hints at here: mentioning different castes and factions, a code of honour, and aspects of their ancient civilization. There is also a very touching moment when Skaldak remembers his family. The space ship at the end that rescues Skaldak is magnificent; there is a wealth of potential here for the Ice Warriors to return in force, so let’s hope they do soon, preferably with Mark Gatiss scripting their next story.

Matt Smith has some great moments as the Doctor in Cold War. He spends most of the episode struggling to contain the threat posed by the Ice Warrior, while also briefing his new companion on the tense political situation they are faced with, knowing that if Skaldak launches the submarines missiles it will start a war that will destroy the world. We lean that Skaldak was a great hero of the Martian race, a powerful warrior, and Matt Smith’s portrayal of the Doctor continues to impress as he tries to persuade the Ice Warrior not to unleash the nuclear warheads and start a war.

David Warner is also exceptional good as the elderly Professor Grisenko; a great character who steals every scene he’s in as he walks the corridors of the submarine, singing pop songs from the 80’s. The grizzled Captain Zhukov is played by Liam Cunningham, and his Lt Stephashin (Tobias Menzies), along with crewmembers Piotr (Josh O’Connor), Onegin (James Norton), and Belevich (Charle Norton) are all a great bunch of characters that makes Cold War a really fun episode filled with some cracking dialogue and brilliant action scenes.

It’s great to see the Ice Warriors back for Doctor Who’s 50th Anniversary year. Cold War is a brilliant episode by Mark Gatiss, the Ice Warriors scaly armoured form has received a fantastic update for the iconic monsters return, and together with terrific performances by Matt Smith and Jenna-Louise Coleman this is one of the best episodes of season seven.