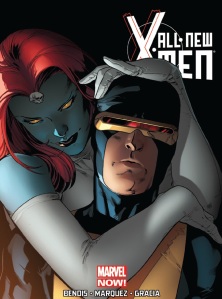 Having travelled into the future, the young Scott Summers is having a tough time coming to terms with the fact that he is destined to become the murderer of Professor X and the instigator of a mutant civil war. Deciding that he needs some time away from the Jean Grey School of Higher Leaning to gather his thoughts, Scott takes Wolverine’s motorbike and sets off, but he finds that the future is not as clear cut as he first realized. Wolverine tracks him down but Cyclops blasts him with his optic beams, using the opportunity to give Wolverine the slip and head for Manhattan.

Cyclops arrives as a bank where the assistant takes him to his safe deposit box, but one of the staff members recognises him and alerts security. As he attempts to leave Wolverine catches up with him in the foyer of the Bank, and he uses his Avengers ID Card to persuade the security guards to let them leave the building. In an alleyway Wolverine suddenly changes into Mystique, she leads Scott away and dupes him into telling her what has happened at the school. She tries to persuade him that the school turned its back on Xavier’s dream, that he should go back and close it down, before confronting his older self and shutting him down as well.

After Mystique has left Wolverine shows up in his jeep to give Cyclops a lift back to the school, unaware of the poisonous lies the shape shifter has been telling Scott, while Kitty places her new students on a vigorous exercise regime. Wolverine and Scott return, as Logan leaves Storm in charge of things, Scott walks over to Jean and gives her a very special invitation…

All New X-Men #7 is another fine issue from Brian Michael Bendis, who continues to elevate this tale to new heights with the addition of Mystique. I really like how the young Scott Summers is finding his feet in his own future, the scene where he checks out the contents of his safe deposit box in the bank are really good. The objects inside, the wedding invitation in particular, really illustrate how cleverly Bendis has been in bringing the original X-Men into the future. It’s as if Scott is rediscovering himself as he dons the ruby quarts glasses stored in the box, looking through memories that might never even exist if his mission to save his future self from himself goes wrong.

Mystique is one of my favourite Villain’s, the way she uses her powers to mimic Wolverine are really funny, and she proves to be at her manipulative best as she plants some telling seeds of doubt in Scott’s mind. David Marquez is on fine form as he continues to stand in for Stuart Immonen, there may not be any big action sequences, but the quiet moments between Scott and Mystique are really captivating and draw you into the story. It was also great fun to see Kitty squaring up to Iceman when he doesn’t want to take part in her exercise class, their banter is hilarious, and she quickly shows him who is boss when she throws him to the ground.

All New X-Men #7 is a great issue, the pace may be a tad slower than previous issues, but the last few moments as Scott gives Jean the wedding invitation he found in the safety deposit box are brilliant. He then walks away before she can say anything, leaving her to silently come to terms with the fact that one day they might become husband and wife.