After deciding to take matters into his own hands, Namor King of Atlantis goes against Cyclops orders and launches a devastating attack on Wakanda. With only moments to spare, Hope manages to escape through a portal to K’un Lun with Wolverine – closely followed by Iron Man and the Thundered – leaving Captain America and his fellow Avengers to face Namor. They fight bravely, suffering terrible injuries in the process, but are ultimately no match for the Phoenix empowered Altantian. Fortunately the battle weakens Namor enough for the Scarlet Witch to strike back and defeat him.

The Phoenix Five arrive in Wakanda by Siege Courageous as Namor falls. The Avengers look on in horror as the Phoenix Force tears itself free of Namor, its power fluctuating and dividing, before it rise up into the sky to bond with Cyclops, Emma Frost, Magik, and Colossus. Realizing that these four X-Men are now even more powerful, Captain America orders the Avengers to retreat. They escape by teleporting through another portal to regroup with the others in K’un Lun and tend their wounded. As the members of the Phoenix Five bask in the energies they have absorbed from Namor, Professor X confronts them telepathically and issues Cyclops an ultimatum.

AvX #9 joins the story eight days later in K’un Lun as the Avengers have set out to rescue their team mates who have been captured by the X-Men, leaving Spiderman to oversee Hope as she continues her training – offering what advice he can. The Avengers return through a mystical portal, having failed miserably in their mission, and bring news that Thor has also fallen in battle and been captured by Magik and Colossus. While the Avengers treat their injured, Tony Stark continues to struggle to understand how the Phoenix energy, Hope’s Mutant abilities, Wanda’s Hex Magic, and the Iron Fist all fit into the grand scheme of things. 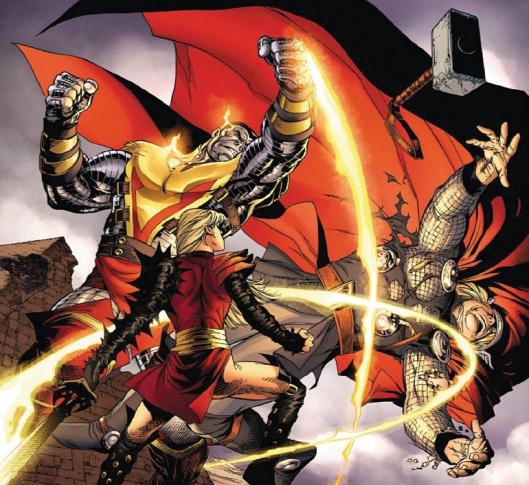 Colossus and Magik imprison Thor in a volcano in the Verkhoyansk Mountains of Russia along with the other fallen Avengers, binding them all within the pocket dimension of Limbo that Magik has created to form a prison filled with deadly Hell Worms. Sickened by how the Phoenix power has corrupted the Phoenix Five to the point where she hardly recognises them any more, Storm travels to Waknda to enlist the help of her former husband T’Challa, only to learn that their marriage has been annulled. Putting aside their personal differences for the time being, Storm decides to help the Avengers mount a rescue attempt, and together they meet with Professor X at the volcano in Russia.

With the help of Dr Strange and Professor X the Avengers manage to breach the magical defences and free the captives from the Hell Worms, but as they try to escape they are brutally attacked by Colossus and Magik. In a bid to buy the Avengers more time, Spiderman bravely takes on the two X-Men single-handedly to cover their escape, and takes a terrible beating in the process. He may have been battered to within an inch of his life by Colossus, but Spiderman’s banter is enough to turn the two Phoenix Powered siblings against each other – resulting in the Phoenix Force vacating its hosts as they fall.

Emma Frost struggles to control her newfound power as it begins to rage out of control. She meets with Cyclops in the Danakill Desert in Ethiopia, but even though she reveals Hope’s location to Scott, he offers little sympathy for her plight – flying off to K’un Lun and leaving her to succumb to the terrifying power now at her disposal. As the Avengers return through the portal to K’un Lun, Cyclops materializes overhead, more powerful than ever, and determined to make Hope return to Utopia.

Avengers vs. X-Men #9 is one of Jason Aaron’s most action packed issues yet, it opens with an eerie Lost style flash-forward as Spiderman is punched senseless by Colossus, jumping back to recount the events that will lead to the web headed hero making his valiant sacrifice. With the Avengers taking such heavy losses, Wakanda in ruins, and even Thor defeated, this issues is perhaps the bleakest yet for the Avengers. Its nice to have an issue that allows Spiderman to play a more pivotal role, he has been somewhat overlooked so far, and he has some great scenes with Hope where he helps her understand what it means to be an Avenger.

This issues action set-pieces are once more provided by Adam Kubert on pencils and John Dell’s inks. We are treated to page after page of stunning locales around the marvel universe as the story unfolds, from the majesty of K’un Lun to the ruins of Wakanda, the pace never lets up, right up until the Avengers daring raid on the volcano leads to Spiderman’s terrible beating, AvX #9 hardly gives the reader to pause for breath.

One aspect that dominates AvX #9 is the way the remaining members of the Phoenix Five have succumbed to the darker sides of their nature, particularly Emma Frost who is coldly rebuffed by Cyclops and vents her fury on a pilot who one accidentally killed a mutant and failed to report it – Emma plays judge jury and executioner and fries his mind as he sits eating lunch with his family! It seems ironic that Emma has not been able to cope as well with the Phoenix Power as Cyclops, especially considering that Scott has no telepathic abilities, her fall from grace looks set to be the most horrifying of all the X-Men – easily eclipsing the way Magik and Colossus seemingly cancelled each other out after being ticked by Spiderman. It is Cyclops unwavering skills as leader, together with his determination to see his Pax Utopia enforced, that has so far kept his emotions in check. Now that Scott and Emma are the last hosts for the Phoenix Force things look worse than ever for the Avengers, unless the absolute power they now wield ultimately proves to be their downfall.

Avengers vs. X-Men #9 sees the series really starting to kick into high gear as the plot begins to build towards the final issues. AvX #9 has some of the most stand out moments so far in the series, and looks set to provide many more as Cyclops prepares to attack K’un Lun.